'What the community is all about': Anxiety is met with determination as southern Manitoba confronts COVID-19

Businesses are closing, grocery stores are feeling the stress and local politicians can hear the anxiety as the COVID-19 pandemic forces people to keep their distance in rural Manitoba.

In towns along Manitoba Highway 75, the major artery running from Winnipeg to the U.S. border, it is easy to see how the COVID-19 crisis is biting into normal life.

The doors of many businesses display hand-drawn "closed" signs and traffic, even for smaller communities, seems light.

One thing the health crisis hasn't slowed is the grocery business. In fact, the effect has been the opposite.

Pat Schmidtke remembers the week starting with Friday the 13th of March as "wild."

At his Bigway Foods store at the south end of Morris — a town about 60 kilometres south of Winnipeg that the highway runs through — toilet paper rolled off the shelves. Sugar, milk and other staples were jammed into carts and taken home.

The health emergency and growing social distancing requirements loomed over customers who worried they wouldn't have enough supplies.

Schmidtke said his staff wanted to help people, but were concerned they might catch the coronavirus doing it.

Worried that some would get even more anxious as their cupboards ran bare, he put out a message on Facebook to let people know Bigway will make home deliveries.

He wasn't prepared for the response.

"It took off. It scared the crap out of me. Biggest Facebook post I ever had," he said.

The next morning he had a dozen volunteers offering to help.

"'Here's my number, here's my name. If you need help delivering  groceries, you phone me,'" they told him.

"That tells you what the community is all about."

The level of anxiety, though, is unlike anything Schmidtke has ever seen.

At the other end of Morris, another business owner has grappled with tension over prescription drugs.

Unlike the grocery store, pharmacist Nathan Friesen says his Super Thrifty Drugs location isn't getting massive foot traffic. In fact, it's dropped in his drug store. Deliveries, however, are up.

Friesen has to be mindful not only of preventing the spread of the virus in the community, but protecting himself and his staff.

"If we go down sick, that's a big problem," said Friesen, who has implemented social distancing measures inside his store.

The pharmacist is also carefully monitoring his stock of drugs. He says there are some restrictions on the amount he can order, and he has to watch out for anxious patients trying to buy up more medicine than they need.

"We are trying to prevent hoarding of medications, like you've seen with the toilet paper and the alcohol and those kind of products. People went kind of nuts."

Friesen says some supply chain management is in effect throughout the pharmacy business, but he's confident he can manage his client's needs.

Like most people, he acknowledges that life has changed in the face of the pandemic, but he's confident residents around Morris will continue to rise to the occasion and look after each other. 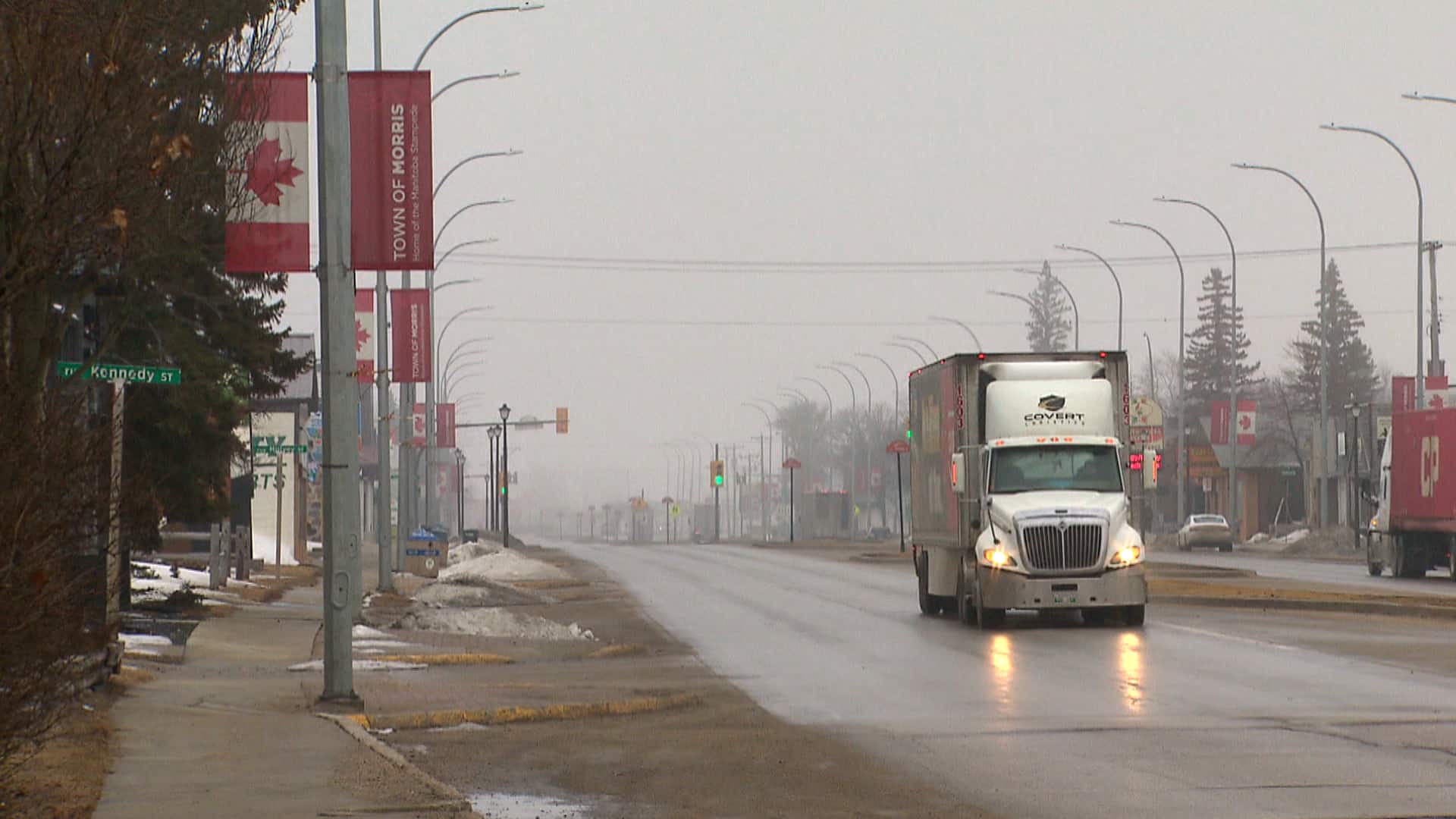 11 months ago
4:01
Residents, municipal leaders and businesses in communities along Highway 75 are concerned about COVID-19, but coping. 4:01

Meanwhile, about 40 kilometres down the highway, there isn't a single vehicle at any of the passenger vehicle checkpoint lanes at the U.S.-Canada border at Emerson.

Not one. For a half an hour in the middle of a Tuesday afternoon.

The transport trucks continue to queue in their own line, but there are no people coming back from shopping trips to Grand Forks, N.D., or hockey teams returning from tournaments. There's not even a sign of any returning snowbirds, anxious to come home.

On March 21, a temporary 30-day restriction began on all non-essential travel into Canada.

For those Manitobans coming home from their winter breaks, an electronic sign on the northern side of the border blinks a message — "ALL SELF ISOLATE 14 DAYS."

The trickle of traffic at the border is having an effect on the communities around the port of entry.

"There are people whose livelihood depends on cross-border trade here," said Dave Carlson, the reeve of the rural municipality of Emerson-Franklin.

The reaction to the health crisis is the same across his municipality, from Dominion City to Emerson, he says.

"I think the first thing people say to you [is] 'can you believe what's going on? This is crazy!'" Carlson said, standing in front of the fire hall in Dominion City, a tiny community about 15 kilometres north of Emerson.

There may be varying degrees of anxiety, but Carlson can tick off a number of ways the region is responding that reassure him residents are facing the emergency the right way.

Nearly 20 volunteers have started a phone bank to reach out to seniors who are isolated by social distancing measures.

Altona Mayor Al Friesen's broadcasting background peeks out from his social messages, as the community of over 4,000 copes with COVID-19.

In one Facebook post, Friesen — outfitted in safety glasses and rubber gloves — takes a page from Bill Nye the Science Guy to gently chide his residents about throwing sanitary wipes down the toilet.

The half serious, half humorous post shows Friesen swirling wipes around in a glass jar filled with water, to demonstrate that they will not disintegrate like toilet paper.

Light-hearted but important community reminders aside, Friesen — like other municipal leaders — is feeling the anxiety and concern of residents about COVID-19.

"Is it coming here? When will it come here? How serious will it be?" are the questions he hears, he said.

The Altona mayor talked with CBC News in the town park, in front of police tape freshly wrapped around a play structure.

No crime has been committed — it's there to keep kids off the equipment, and is just another precaution during the health emergency.

The crisis is biting into business all around town, and Friesen is on the phone a lot.

"Those are tough times, and we need to make sure that we're with them. And I think in a small community, when you know the person who runs the business, that makes that connection more real."

Altona is normally a bustling community, with big businesses such as the book printer Friesens and a Bunge canola processing plant right in the town.

Between the two businesses, 700 jobs are on the line if the social distancing measures get more acute — or the economy shuts down even further.

Mayor Friesen, like so many of his fellow political leaders and residents, has confidence his community will weather this crisis. What will be needed in the aftermath is resolute support for the local businesses that have been hit hardest, he says.

"This is an opportunity to, when — not if, but when — things turn around and get back on track … support those businesses that were there, and will be there in the future."