Manitoba walloped by yet another old-fashioned prairie storm, tornadoes and all

Some farmers in parts of southwestern Manitoba had their barns uprooted or torn down by gale-force winds and a tornado that struck on Wednesday. 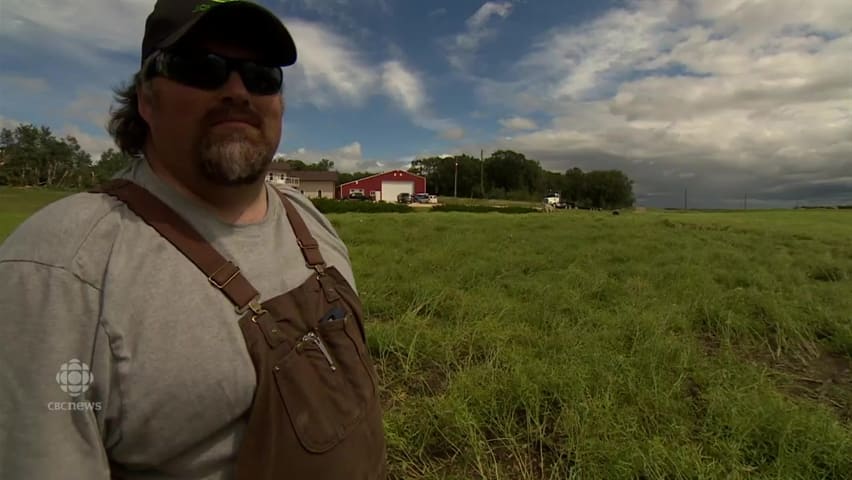 Glenboro cleans up after Manitoba storm

Some farmers in parts of southwestern Manitoba had their barns uprooted or torn down by gale-force winds and a tornado that struck on Wednesday.

Environment Canada meteorologists are investigating two tornadoes that touched down in the area, including one that folded Maureena McPhail's pastoral barn in on itself and put her flock of 150 sheep at risk.

"We didn't see the tornado coming," McPhail, who has lived in Glenboro for over 20 years, told CBC News on Thursday.

"My husband heard it. It sounded like crumpling paper. When he looked out, the whole shed just blew to pieces and the tornado left."

McPhail said she and her husband spent the evening rounding up their 150 sheep. None of them were injured.

"We're quite happy about that. They're out in the pasture right now," she said.

"They're upset, to say the least, but they'll be fine in the pasture until we can rebuild."

The weather agency said a low-pressure system tracked across the Prairies on Wednesday afternoon and evening, producing the two tornadoes:

Near Glenboro, Chad Berry said the winds picked his barn up off its foundation and dropped it onto his camper 10 metres away. Several sheds were destroyed as well.

"The camper's wrecked. The barn is sitting on it right now and the back end is being held up by the camper," he said.

"There was a snowmobile trailer sitting right beside it, and it's about 300 or 400 feet down the field out there."

Berry said he was driving half a kilometre away from his farm when he steered his truck into a ditch to avoid the tornado as it touched down.

As Berry recorded video of the wide tornado and waited for it to pass, he worried about what damage he would find at home.

"Oh, it was quite a mess. It was still blowing and raining very hard," he said.

"I was quite surprised. I didn't notice the first shed missing until I drove past and looked back."

Berry said thankfully, his house was not damaged and his wife and children were out of town at the time.

Environment Canada meteorologist Brad Vrolijk said the tornado west of Glenboro eventually tracked northeast into Spruce Woods Provincial Park and lasted between 20 and 30 minutes before it finally fizzled out.

But before it did, Rosita Lopez said she and at least 10 other drivers near Glenboro were forced to pull over at a local gas station to wait out the worst of the storm.

"The highway was almost being whitewashed with sideways rain. It almost looked like a snowstorm that was coming across," Lopez said. "It was loud, it was intense and my car was being pushed across the highway."

That white-knuckle drive through the storm with a tornado in the distance was one of the scariest things Lopez says she has ever done.

"We were kind of at the back end of this massive storm cell and I'd just come into it," Lopez said, adding she had to stop eight times on the highway during a five-hour drive to Winnipeg that usually only takes two hours.

A funnel cloud also formed during the storm, spiralling down north of Hartney, about 250 kilometres southwest of Winnipeg.

The wild Wednesday weather was enough to delay the game between the Blue Bombers and Tiger-Cats for 2½ hours, but Winnipeg still received less than five millimetres of rain in the storm, Vrolijk said.

"We somehow dodged a bullet last night. We got a very good light show here but not much else, which was surprising for how long it rained that it was only that much," he said.

"I think by the time the game started, half the Hamilton team must have fallen asleep," Vrolijk said. "The Blue Bombers' trick: keep the other team up way past bed time and then start the game."

Other places weren't left as dry (or lucky) as Winnipeg.

Morden was pounded by rain and 111 km/h winds that took down trees and caused overland flooding, Erickson got drenched with 100 millimetres of rain and wind speeds in Winkler reached 95 km/h, according to Environment Canada.

Storm chasers were out in full force in the southwest of the province, capturing the volatility in all its stormy glory. Many people posted photos and videos to social media using the hashtag #mbstorm.

These videos were shot near Souris, in southwestern Manitoba, where a funnel cloud came up just short of touching ground and forming a full blown tornado.

Marlin Froese shot this video from beneath the eaves of a home in Morden as the rain came down in sheets.

Shannon Bileski and Chris Stammers caught the beginnings of a funnel cloud in action near Hartney.

About 90 kilometres southwest of Winnipeg in Plum Coulee, Cameron Hildebrand was left with an upturned trampoline and a damaged children's play structure after the storm.

Some communities are still recovering from tornadoes that tore through southwest Manitoba in July, destroying dozens of homes and displacing more than 100 people in Long Plain First Nation south of Portage la Prairie.

With files from Riley Laychuk