When the Royal Manitoba Theatre Centre presents the classic It's a Wonderful Life this holiday season, a performer whose work is usually done behind the scenes will instead play a starring role. 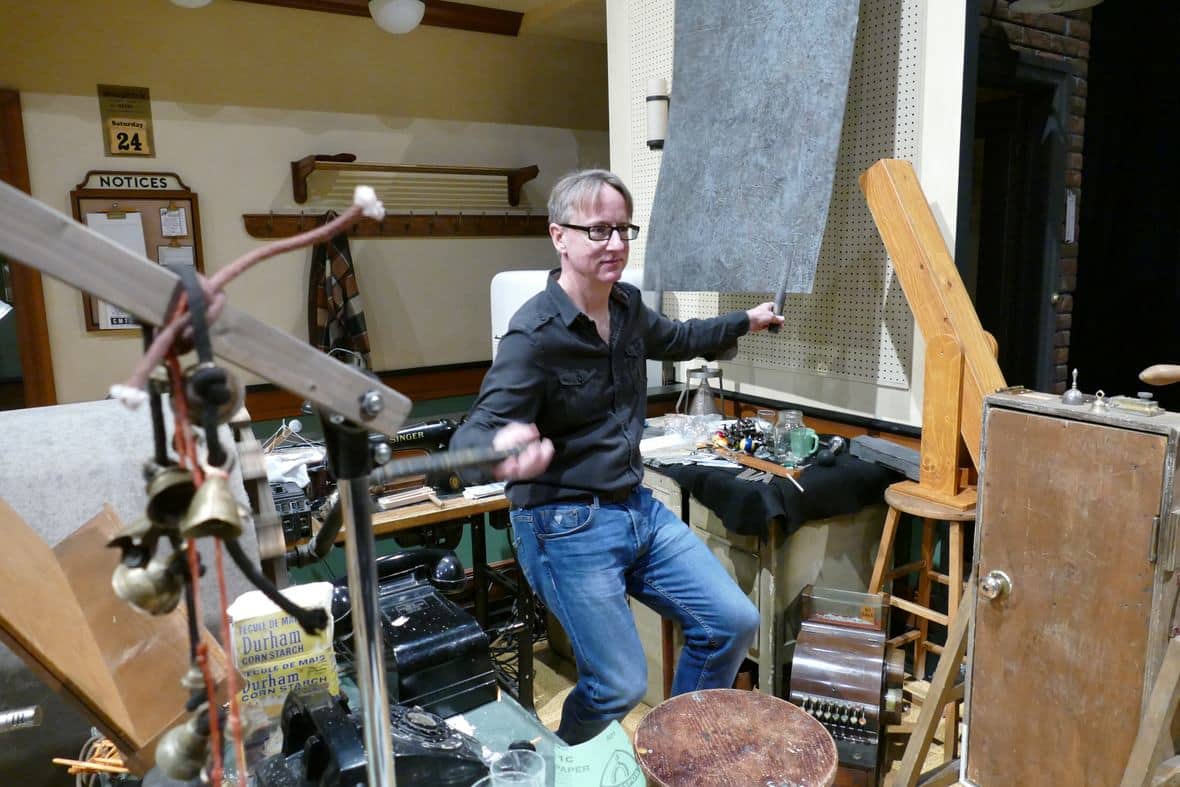 2 years agoVideo
3:19
John Gzowski has a starring role in the Royal Manitoba Theatre Centre's It's a Wonderful Life. He creates sound effects live on stage. 3:19

When the Royal Manitoba Theatre Centre presents the classic It's a Wonderful Life this holiday season, a performer whose work is usually done behind the scenes will instead play a starring role.

Sound designer John Gzowski takes on a unique role in the show. He's responsible for all of the sound effects the audience will hear on stage, from footsteps to car crashes and everything in between.

It's known as foley, a form of sound art used to add sound effects to television, film, radio and stage plays. Today, foley artists typically digitally layer and synchronize sounds to the videos they're working with.

It's a Wonderful Life: The Radio Play, running at the Royal MTC's John Hirsch Main Stage until Dec. 15, sees its cast recreate the classic Frank Capra film as a radio play, performed live on stage, taking the audience on a sonic trip to the fictional town of Bedford Falls.

In keeping with the style of a 1940s radio play, Gzowski creates all of his sounds live on stage. He sits stage left, in an cluttered area that brings to mind an abandoned storage barn on any farmyard in Canada.

This is Gzowski's foley studio.

"It's a funny thing, because we're doing a radio show, but in some ways, the sound effects are the visual elements," Gzowski said.

It's not technically feasible, obviously, to have a sheet of ice or a Ford Model T on stage for the sound effects, so Gzowski has to recreate the sonic sensations with objects found in the RMTC prop shop, antique stores and junk drawers.

For instance, the vehicle engines are recreated using Singer sewing machine motors, at times rigged to trigger a snare drum to add the rattling of the motor. Ice breaking beneath the feet of characters comes in the form of Gzowski snapping celery sticks.

The creativity of designing the sounds is only the first step, as being able to perform them live on stage poses another challenge.

Gzowski tinkers and plunders with his reclaimed props, using every limb available to create a full soundscape and layer his instruments live on stage.

In a production during which the audience might be tempted to close their eyes and sink into the sound, Gzowski's foley design and performance may well keep patrons wide-eyed in a winter wonderland.

"The great thing is that it's another way into the story," he said.

"You can see all the tricks and what's going on, but still get caught up in the story."

Colton started his career in Saskatoon focusing on live sound production, but quickly found a love for radio as a community radio DJ. He joined CBC Manitoba's Information Radio as an audio technician in 2017. He's enjoying his new home in Winnipeg, eagerly exploring the city's history, local music and film and hearing great Manitoba stories from the community.