A soccer program in Winnipeg is demonstrating how important the sport is for refugee children trying to make a new life in Canada — even for a boy who lost a leg in the Syrian conflict.

As excitement over the World Cup shows how much soccer is the world's game, a program in Winnipeg is demonstrating just how important it is for refugee children trying to make a new life in Canada.

She and her family are gathered around their TV, watching World Cup highlights.

The Syrian national team didn't make the World Cup, so they're cheering for Brazil, France and Argentina.

"I'm good at soccer and I have friends there," adds his brother Muhammed, 11.

The boys have played soccer since they could walk, starting when they lived in Aleppo, Syria.

But for Ahmed, it's more of a challenge.

"I was in Syria and I wake my brother up. I say, 'Let's go play soccer outside,' and then we went outside, a bomb came down and fell on the wall and … then big rocks were coming and then my leg got caught," he recalls.

Ahmed lost his left leg. "I was so sad and mad," he says.

It's one of the reasons the family fled their home.

"My house is bombed. My city is Aleppo. And my son lost leg," Cuhadar says.

In May 2014, the family went to a refugee camp in Turkey. They came to Canada as part of the federal government's commitment to resettle more than 25,000 Syrian refugees between late 2015 and early 2016.

Shortly after arriving in Winnipeg, Ahmed got a prosthetic leg. Two, actually — one for everyday and one for sports.

Now, he plays soccer every week at the Winnipeg Newcomer Sport Academy. It's a free, volunteer-run organization with support from the City of Winnipeg, Sport Manitoba, the Manitoba Soccer Association, the Winnipeg Foundation and others.

"Even though he has a prosthetic leg, he's one of our most hardest workers here and he always comes out with a smile on his face," says Andrew Kliment, one of the coaches.

Kliment, who has played for the University of Winnipeg Wesmen, national teams and professional teams in Europe, says playing sports teaches life skills.

"We hope for them to leave here as better athletes and better people and also get integrated into any kind of sport," he says.

The academy started in 2016, inspired by an adult newcomer soccer team in the city.

Organizer Carolyn Trono says the goal is to create a sense of belonging and to use sport to help newcomers integrate into Canada.

"It's the world's game. They all love it. They've continued to play, even in their transition. It's something that unites people and it's a common language."

The University of Winnipeg is donating space for the academy at its Axworthy Health and RecPlex.

The kids, he says, are "getting used to new environments, new activities, new languages, and for them to have an environment to be together and grow together and have fun, it's what we want."

Ahmed wears his athletic prosthesis when he's in goal, and he uses crutches to play other positions.

"It's hard because other people play better than me," he says. "Sometimes I miss some of them because some of them shoot hard."

Still, Trono says Ahmed could be destined for Canada's Paralympic team if he keeps playing soccer and sledge hockey.

"Whatever he chooses to do, he's been given the best opportunities possible we can provide for him. So who knows what's going to happen?" 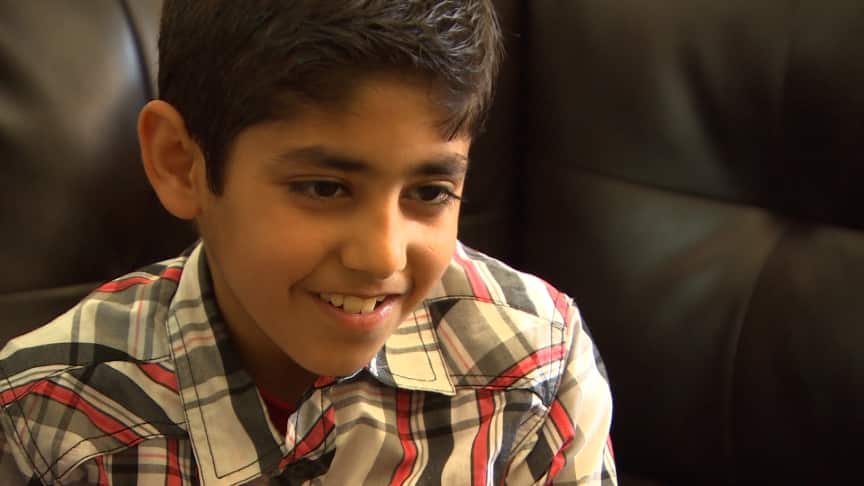 3 years agoVideo
2:15
A 10-year old Syrian refugee in Winnipeg is getting back to the game he loves thanks to a sports program for newcomers, and a new prosthetic leg. 2:15