Researchers with the University of Manitoba are collecting soil and vegetable samples from yards, parks 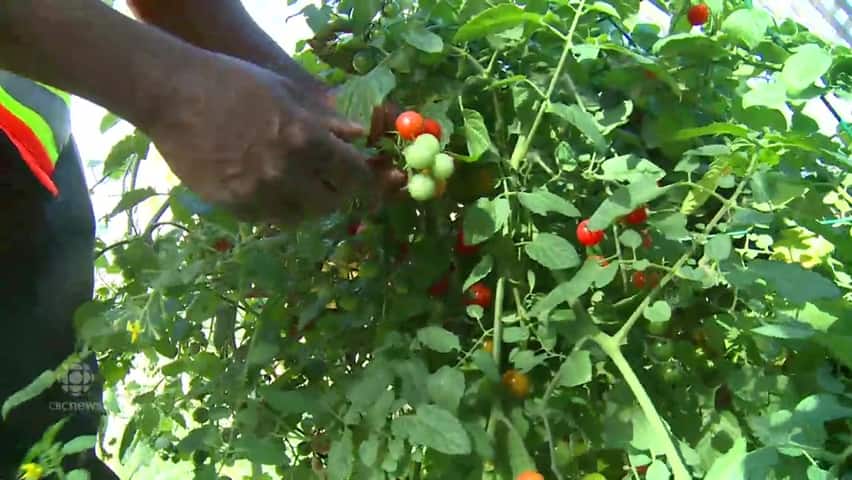 Preliminary testing in August, by Shirley Thompson, an associate professor in the University of Manitoba's Natural Resources Institute, found elevated levels of lead, copper, zinc and cadmium among a dozen soil samples.

In some cases, the levels exceeded Canadian standards by 3-15 times the recommended limits. A version of Thompson's report was submitted to the province.

Researchers are now collecting samples from at least 100 residential properties, as well as ditches, streams and parks in the area which border Mission Industrial Park — which some in the area believe may be the source of the contaminants.

"We are targeting the layer of soil that's very close to the surface because we suspect that a lot of the contaminants that come in, they're coming from the atmosphere," said Francis Zvomuya, an associate professor of soil science at the University of Manitoba.

The team collected dozens of garden vegetables and soil samples from yards on Kavanagh St. and Giroux St. Monday and sorted them into paper bags based on each address.

Zvomuya said they will be taken back to the University where they will be dried and sent to an independent lab for testing, once funding is secured.

The goal is to determine whether soil contamination is widespread and find ways to remediate any potential hazards, he said.

"This will also form a baseline," Zvomuya said. "We need to get an idea of where the contaminants levels [are] … are they going up, are they going down, or are they staying the same?"

Teresa Cwik with the South St. Boniface Residents Association said she and others in the area have noticed an increase in dust and particulate matter on their properties. She is worried about the potential health impacts of breathing or ingesting contaminants.

"I've noticed, and I've had lots of complaints of people saying children and adults their asthma is worse, they're getting burning throats, a lot more coughing," Cwik said. "We don't know if our vegetables are safe to eat if there is lead in the soil."

The group is calling on the province to work together with the U of M to provide additional soil-testing, air quality, water and noise testing, Cwik said.

"They have the power to go on the sites of all the industries. They can get testing at the source — the point of emissions — they can tell how much of what substance is coming out of each and every place so we can know for sure what is it that [we are] breathing," she said.

In an email, a spokesperson for the department of Manitoba Sustainable Development said "the province has reviewed the lab reports presented by Dr. Thompson and the residents are still finalizing the specifics of their request for further testing."

The spokesperson also said "at this time, no decision has been made on further testing."

The south St. Boniface Residents Association is also working to raise $40,000 to conduct an independent air quality test if the province does not deliver on its request.

In the meantime, Zvomuya said people should not panic.

"I can't give any conclusive recommendation just based on the preliminary results that we got, but this study that we are doing right now will be able to say with confidence whether any contaminants that might be present provide a real-risk to human health," he said.

"All I can say to them is to keep washing your vegetables."