His music lands in the genre of emo rap or emo hip hop but Mike Skwark, a.k.a. Smrtdeath, isn’t keen on labels. "I’m just doing my thing," says Skwark, recently picked as one of three emerging Canadian musicians for the 2019 Allan Slaight Juno Master Class.

'If people want to hate on you then they’re just stupid,' says Mike Skwark, a.k.a. Smrtdeath

He sings about love and loss, pain and purpose, over hip-hop beats.

His music lands in the genre of emo rap or hip-hop, but Mike Skwark — a.k.a. Smrtdeath — isn't down for labels.

"I'm just doing my thing," said Skwark, who has built up a following in the process — and was recently picked as one of three emerging Canadian musicians for the Allan Slaight Juno Master Class, a prestigious mentorship.

The Winnipeg-bred musician has been charting his own course for years.

He started playing drums at about age 11 in his south Winnipeg home. He later switched to guitar and ultimately began writing music, recording, performing live, and filming music videos to satisfy his growing fan base.

Fast forward to 2019. Today, the 27-year-old has a strong following on Spotify and Sound Cloud. Music videos on his YouTube channel have posted views into the millions. 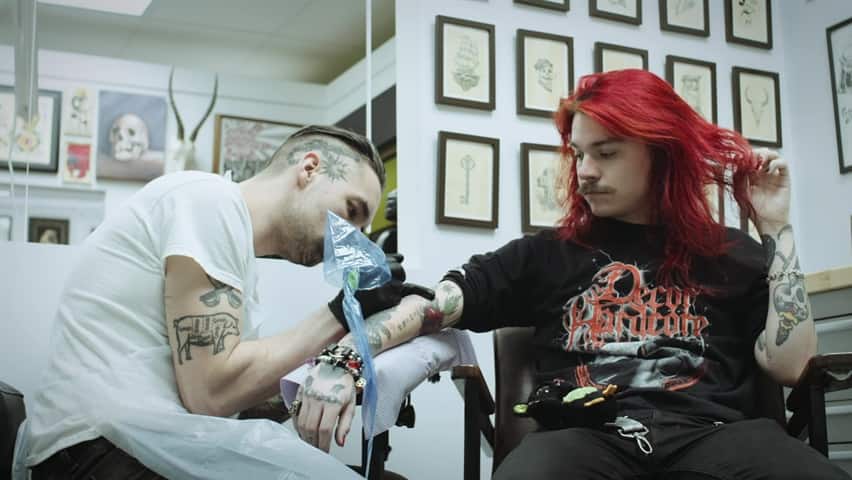 'I always just did my thing': smrtdeath on his emo rap

2 years ago
3:19
Hip hop artist smrtdeath, who won a Allan Slaight Juno Master Class mentorship, talks about how he went from a 11-year-old playing drums in his south Winnipeg home to winning over fans with his songs about love and loss. Video: Tyler Funk and Carmen Ponto 3:19

Now that course also finds him living in Los Angeles permanently, as of November 2018. He is on tour throughout the year and he is currently gearing up for for the 2019 Allan Slaight Juno Master Class, an artist-development program that provides mentorship and high-profile performing opportunities.

The award singles out up-and-coming musicians and includes a trip to Toronto for a mentorship week and a trip to this year's Juno Awards, which will be held March 17 in London, Ont.

"It's very nice to be honoured by the Junos for all the hard work I've done over the years," Skwark said.

"It's cool to be recognized for something in Canada, because I don't get a lot of recognition there. Hopefully, it'll open up more opportunities for me in Canada."

'I never cared what people think'

As for his music, Skwark says "I think it's honest and it's catchy."

His image is all about honesty too.

With his long, brightly dyed hair and painted fingernails, Skwark balks at conformity. He likes wearing fishnet stockings under jeans and sheds any notion that girls and boys should dress one way or another.

Young fans often message him to talk about their own hurdles with parents and teachers when they don't conform, he said.

"And I tell them … that's not cool. That's garbage. You should be able to do what you want, " he said.

"Nothing matters. There is not one way people are supposed to be, so you do you and hang out with people who make you feel good."

That's a rule he lives by, he says. When people stare at him, he just stares back until the moment passes.

"I never cared what people think. I always just did my thing," Skwark said.

"And I try to tell people to just do that too. And if people want to hate on you then they're just stupid. Whatever. That's their problem, not your problem, you know?"