In a pregame ceremony Tuesday, the Winnipeg Jets paid tribute to the late Ab McDonald and Lars-Erik Sjoberg, who were posthumously inducted into the team's hall of fame.

The Winnipeg Jets had no shortage of leadership going into Tuesday night's game against the Minnesota Wild.

In addition to current captain Blake Wheeler, no fewer than eight different men who have worn the "C" on Jets sweaters were in attendance at Bell MTS Place.

In a pregame ceremony, the Jets paid tribute to the late Ab McDonald and Lars-Erik Sjoberg, who were posthumously inducted this season into the team's hall of fame. They are the fifth and sixth members of the hall, joining Hawerchuk, Anders Hedberg, Bobby Hull and Ulf Nilsson.

Sjoberg's son Magnus was on the ice Tuesday night to accept the honour on his father's behalf. With so many high-profile players having suited up for the Jets, he said he was surprised when he got the news about his father's induction.

"I was shocked," said Sjoberg. "There were so many big players here in Winnipeg, so I never thought it would happen." 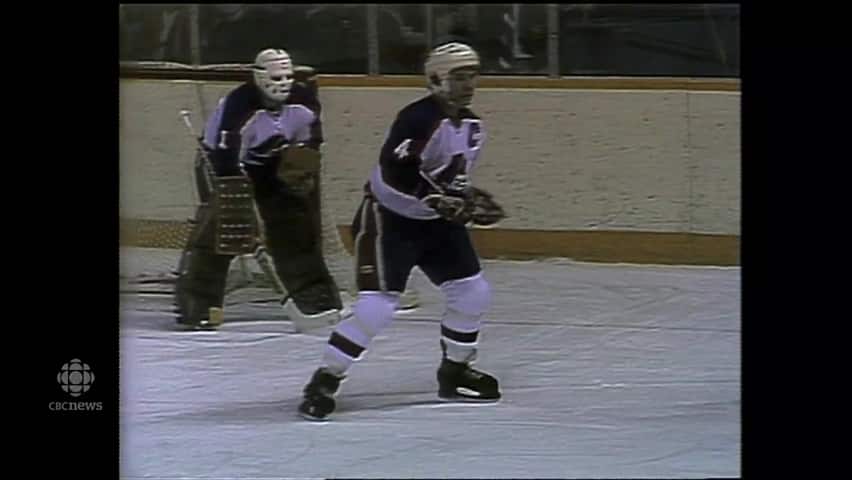 2 years agoVideo
4:59
Learn more about Jets defenceman Lars-Erik Sjoberg, who was posthumously inducted into the team's hall of fame. 4:59

Magnus Sjoberg spent much of his childhood in Winnipeg, where his father was a defenceman for the Jets from 1974-1980. From the ages of 7-12, living first in East Kildonan and then in River Heights, he fondly remembers spending a lot of time around the team, but didn't realize how highly regarded his father was in the city.

"I was so small," he said. "I didn't really notice how big he was until after we came home.

"Since he passed away so early, it's like he's faded away in Sweden, but not here."

Lars-Erik Sjoberg retired from the National Hockey League in 1980, having captained the Jets during their first season in the league. He was working as a scout for the New York Rangers when he died of cancer in 1987.

McDonald, a native of Winnipeg, was the first captain of the Winnipeg Jets and scored the first goal of the team's World Hockey Association era. He died in September, at age 82, after a battle with cancer.