A 12-year-old boy has been arrested in connection with a fire that destroyed the only grocery store and the band office in Shamattawa, crippling some essential services in the remote northern Manitoba community.

A 12-year-old boy has been arrested in connection with a fire that destroyed the only grocery store and the band office in Shamattawa, crippling some essential services in the remote northern Manitoba community.

The boy was one of six children who RCMP believe were involved in setting the blaze on Thursday afternoon. The other five children are under 12 and cannot be charged.

A state of emergency was declared in Shamattawa after the fire razed the Northern Store and the band office and damaged the community's radio station and 911 service.

There is no road access to Shamattawa. All food and supplies must be flown into the isolated community, which is about 745 kilometres northeast of Winnipeg.

RCMP say officers from the Shamattawa detachment were called to a fire at the band office around 4 p.m. CT. By the time they arrived, the building — which housed both the band office and the store — was in flames.

Police officers and firefighters battled the blaze as it burned through the night, causing extensive damage to the building, police said in a release Friday.

Napaokesik said people were out of the band office to attend a funeral in the community when the fire was started.

"I suppose a kid slipped into the office, and we're told that [the child] set one of the sofa chairs on fire," he said.

"By the time anyone knew, there was smoke in the building and everybody evacuated." 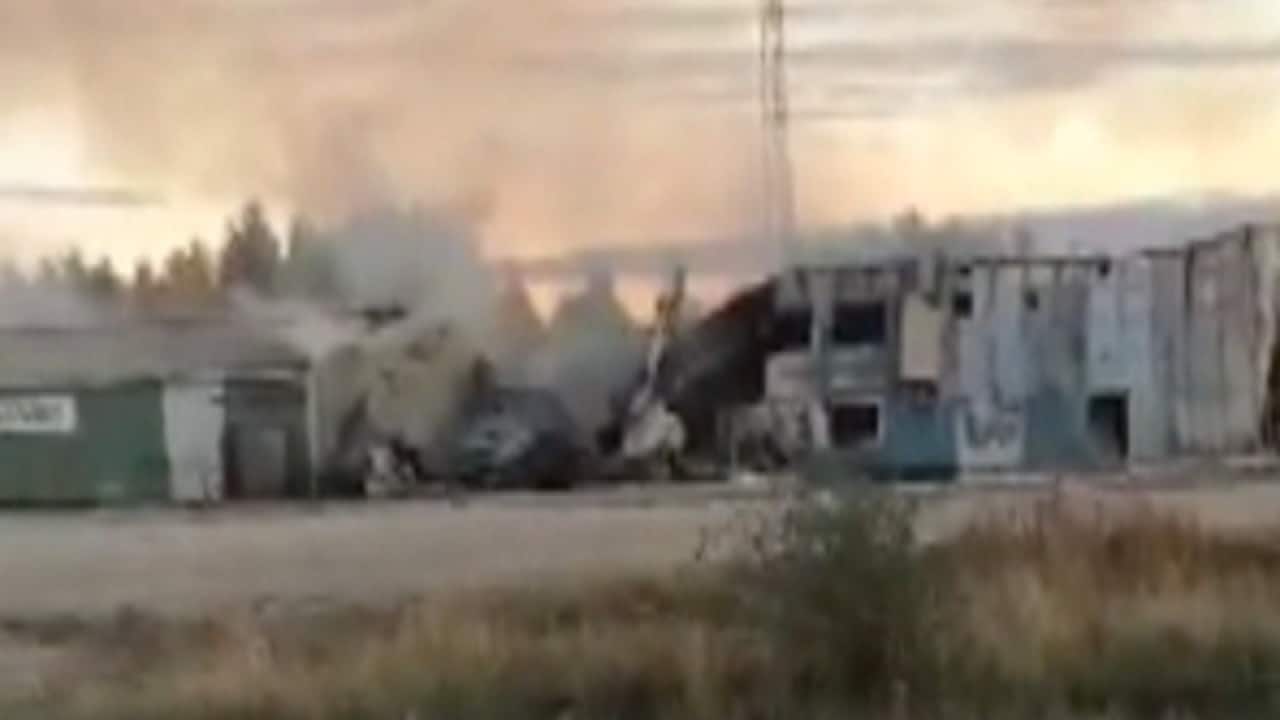 4 years agoVideo
0:20
A remote Manitoba First Nation has declared a state of emergency after a fire destroyed the community's only grocery store along with its band office Thursday. 0:20

The 12-year-old has been released on a promise to appear in court. An RCMP spokesperson said the boy will be charged when he makes his first court appearance.

RCMP say the other five children who they believe were involved in starting the fire cannot be charged because the Youth Criminal Justice Act sets 12 as the minimum age of criminal responsibility. Police could not say how old the children were, except they were all under the age of 12.

Investigators with Manitoba's Office of the Fire Commissioner are heading to the community Friday.

Napaokesik said there have been a number of fires in Shamattawa in recent months, and he's searching for answers about what happened in this case.

"I don't have an answer for that one. We can only blame ourselves for not keeping things safe and, you know, patrolling the area and things of that nature," he said.

Essentials being flown up

The Canadian Red Cross, which is providing assistance to Shamattawa on behalf of the federal government, loaded the following items onto a Perimeter Aviation flight bound for the community on Friday afternoon:

"We're working with the leadership and they have a team within the community that will take it to the central location and distribute it to the people based on need," said Shawn Feely, the Red Cross's vice-president for Manitoba and Nunavut.

Feely said the government asked the organization to identify the community's immediate needs.

"People are rather concerned. They're a little bit shaken," he said, adding that the fire has also affected telephone service in Shamattawa.

"The chief and the leadership of the community are working hard to communicate with us. We do have some phone lines available every once in a while, but it's a little bit spotty and I'm sure that they're working to get those up and running."

Meanwhile, the Winnipeg-based North West Company, which owns the Northern Store, says it is sending pallets of food to Shamattawa, working with the Red Cross to co-ordinate flights.

"We'll be delivering a shipment by air into the community that should arrive this afternoon and that will include staple food products … water, infant formula, some fruit and vegetables," Derek Reimer, the North West Company's director of business development, said Friday morning.

"We are looking at about six to eight pallets of food. I believe the aircraft can hold about 12,000 pounds, so it's quite substantial," he added. "Hopefully, it will be sufficient to meet the emergency needs of the community."

Christine Reimer, vice-president of sales, added that the company is grateful no one was injured in the fire.

"We are committed to the residents of Shamattawa and are grateful that the fire was contained and everyone is safe," she added.

Feely said the Red Cross is working in conjunction with the North West Company to ensure there is no duplication of supplies or services being sent to Shamattawa.

The North West Company says a temporary Northern Store will be set up in the community within the next few days, although officials have not yet decided on its location.

The fire hit close to home for Michael Redhead Champagne, founder of the Winnipeg community group Aboriginal Youth Opportunities and an organizer of the weekly Meet Me at the Bell Tower gatherings.

"I was horrified," said Redhead Champagne, whose home community is Shamattawa.

"It just makes me feel frustrated that those types of challenges continue to happen on First Nations, in our community, in our country."

Redhead Champagne encouraged people to bring donations to Friday's Meet Me at the Bell Tower meet-up on Selkirk Avenue at 6 p.m.

"What we're really looking for is food, water, but especially we want to get diapers and baby formula because there's a lot of little kids up there right now that need it," he said. 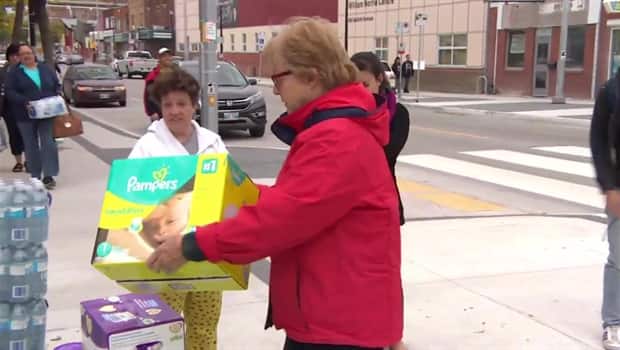 4 years agoVideo
0:47
Winnipeggers dropped of food and other donations for the First Nation community of Shamattawa on Selkirk Avenue Friday at the weekly Meet Me at the Bell Tower event. The only store in the remote northern Manitoba community was destroyed in a fire Thursday. 0:47

Dozens arrived and dropped off an assortment of items for the First Nation.

"Right now we're in conversation with some of the airlines to see what we can do about getting everything transported up there," Champagne added.

Perimeter Aviation, which flies to communities throughout Manitoba and northwestern Ontario, is also collecting donations of food and baby supplies.