A teen who pleaded guilty to second-degree murder in the death of Serena McKay has been sentenced to 40 months in custody followed by 23 months of community supervision.

A teen who pleaded guilty to second-degree murder in the death of Serena McKay has been sentenced to 40 months in custody followed by 23 months of community supervision.

McKay's body was found outside of a home on Sagkeeng First Nation, 100 kilometres northeast of Winnipeg, in April 2017.

The 19-year-old high school student was beaten and left to die by two of her peers. Two graphic videos of the violent attack were later shared widely on social media.

The two teens, who were 16 and 17 at the time of the attack and cannot be named under the Youth Criminal Justice Act, pleaded guilty in connection with McKay's death.

Judge Rocky Pollack delivered his sentencing decision for the older teen in a Winnipeg courtroom on Monday, following a two-day sentencing hearing for the girl in April. She has already served 20½ months in youth custody.

Pollack told the girl after watching the "brutal" videos of the attack he said he was ready to send the teen off to serve the maximum time behind bars "and challenged anyone who questioned that to watch the videos themselves."

In the end, Pollack said he factored in the teen's traumatic past and risk factors including her family's history of residential school, the loss of her father and her own battle with substance abuse. He also noted she had no prior criminal record and was never in trouble at school.

Under the Youth Criminal Justice Act, the judge could have imposed a maximum of four years in custody but he said he felt the teen needed more time in the community to ensure a more successful transition back into society.

The judge also took into consideration roughly two dozen victim impact statements from family and friends of McKay's who said they felt deeply affected by teen's death and videos of the attack.

McKay's mother, Delores Daniels, previously told the court she has struggled with depression and difficulty sleeping since losing her only daughter, whom she described as her best friend.

"I long to hear her voice, to hold her and to tell her that I love her," Daniels told the court in April. "My daughter did not deserve to die." 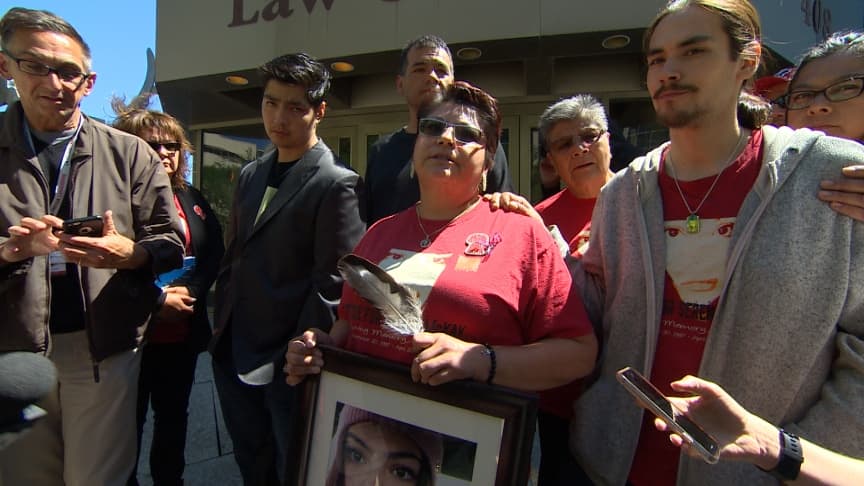 3 years ago
0:48
Delores Daniels reacts after the sentencing hearing of the teen who pleaded guilty to second-degree murder of her daughter Serena McKay. 0:48

Following the hearing on Monday, Daniels said she was "relatively pleased" with the Judge's decision, which was in line with the Crown's recommendation.

"We had hoped that it would be an adult sentence. Unfortunately that didn't happen. But there's nothing that we as a family can do anything about," she said.

The defence had asked the teen serve one year in custody and the balance of the seven year term served in a supervised community setting.

Defence lawyer Greg Brodsky argued his client participated in the attack but was not responsible for McKay's death because an autopsy found the young woman died of hypothermia.

He also told the judge she has been a model inmate who expresses remorse for the attack.

"[The girl] may have expressed remorse in her pre-sentence report but she did not express remorse that night," Crown attorney Jennifer Comack told the judge in April. "She recorded the video on her phone — she pressed record, she shared it.… It's been shared so many times, the RCMP cannot keep it off the Internet."

The younger teen, who pleaded guilty to manslaughter in January, has yet to be sentenced.