They are haunted by flashbacks of bloodshed, racism and despair. They are Manitoba's Sayisi Dene, survivors of a devastating government-forced relocation in 1956. And this summer, the federal government will compensate them for their ordeal.

They are haunted by flashbacks of bloodshed, racism and despair.

They are Manitoba's Sayisi Dene, survivors of a devastating government-forced relocation in 1956. And this summer, they will be compensated for their ordeal. The federal government is finalizing a $33-million package.

The compensation will be the federal government's first formal acknowledgement of the wrongs committed exactly 60 years ago this August. In March, members of the Sayisi Dene voted in favour of the government offer, which, as per the agreement, will include an apology.

Back in 1956, Yassie was just a toddler living with her parents on Little Duck Lake in the northernmost region of Manitoba. Like the Sayisi Dene before them, they lived off the land, following and hunting caribou herds.

But the province decided there was a shortage of caribou and that the Sayisi Dene were to blame. (One newspaper of the day referred to it as a "wanton and unnecessary destruction.")

They were wrong. But that didn't matter.

The federal government relocated the 250 members far away from the caribou, about 200 kilometres east near Hudson Bay, on barren arctic tundra squeezed between the Arctic Ocean and the Churchill cemetery.

"They chose the animals over the humans," Yassie said. "They sacrificed us to save the caribou."

The government promised them housing and jobs. Neither materialized. Instead, the stunned community built makeshift shacks with remnants they found from the nearby town dump. They ate scraps of food, also from the dump. They had no heat, electricity or protection from the elements.

"It was freezing all the time," Jeannie Tom said. "I remember trying to wash the floors but the water would freeze as soon as it touched the ground."

A few years later, the government moved them again, this time to Dene Village, a small thatch of black spruce trees a few kilometres away. The houses there weren't much better; still no heat, electricity or running water.

Starving, culture-shocked and in poverty, residents turned to alcohol. And that was the game-changer. Survivors describe how the once strong Sayisi Dene descended into a hell of atrocities.

Violence was rampant. Rapes were commonplace. 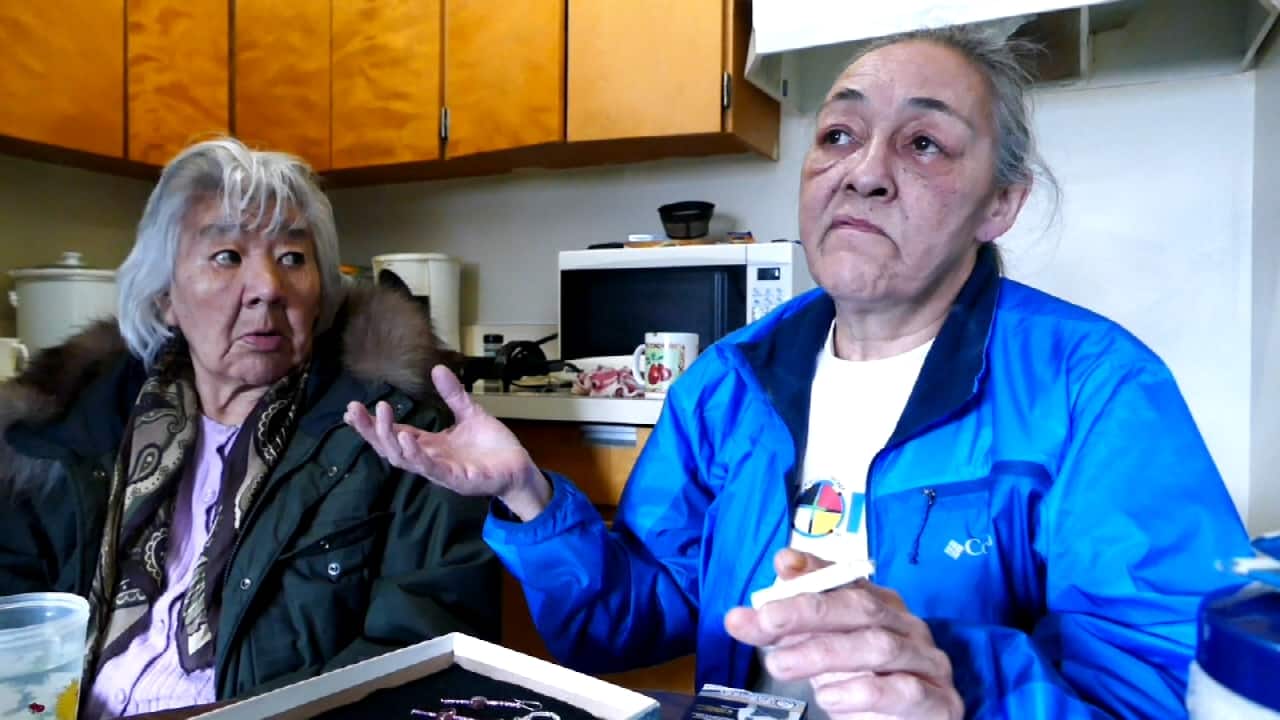 4 years ago
0:34
They are Manitoba's Sayisi Dene, survivors of a devastating government-forced relocation in 1956. And this summer, they will be compensated for their ordeal. The federal government is finalizing a $33-million package. 0:34

"We used to hide under the foundation of the houses to hide from the men coming from [Churchill]," Yassie said, adding sometimes it saved them, but most often it didn't.

"I was under the house holding my friend's hands trying to pull her in with me," Yassie recalled. "But the men grabbed her feet and pulled her out. They raped her right there."

Asked if she was ever caught and assaulted, her answer is short: "Many times."

Some people froze to death.

Others died in house fires.

"My brother Clifford could hear my (other) brother crying inside the house for his mom and dad," Michael Yassie said of a fire in 1971 that killed three of his siblings.

The cause of the blaze was never investigated, never determined. Clifford Yassie later committed suicide.

Then there were the hit and runs.

"That is how my father died," said Jeannie Tom, who lived in Dene Village. "The impact was so hard, his teeth were embedded in the windshield of the car that hit him."

Phil Dickman remembers the racism. Dickman, now retired, was a case worker in 1970 and sent to Churchill to help the Dene youth.

"I remember I was stopped by the RCMP who warned me to stay away from 'those people,'" Dickman said. "I thought, 'Ohhhhh, I see. That's how it is here.'"

Caroline Bjorklund also learned that ugly truth. She was a child in residential school when her single mother was relocated.

Of the 250 people who were forced from Little Duck Lake, former chiefs during that time say 117 died as a result of the relocation. Most of them within just 15 years. Most of them violently.

In 1973, a handful of community members, including Michael Yassie's father, travelled on foot to find better land. With the federal government's permission, they moved to Tadoule Lake, in north central Manitoba, about 250 kilometres west of Churchill. They remain there today.

In 2010, the province of Manitoba formally apologized for its role in the original relocation.

An adjudicator involved in negotiating the compensation package told CBC News that the federal government is in the process of ratifying it. Of the $33 million, $5.7 million will be set aside for survivors (or their estates). They will receive between $14,000 and $20,000 per person, depending on how long they lived in the relocated settlements. The band will invest the remainder of the money into programs for the community.

Today, some survivors like Bjorklund are strong, sober and finding their lost pride.

But Eva Yassie says most can't forget the toll the forced relocation took on their bodies and souls.

"Perish. A lot of people perished from here."