Manitoba's newest millionaires are a couple from the Sagkeeng First Nation who won $1 million in a Western Max lottery draw. 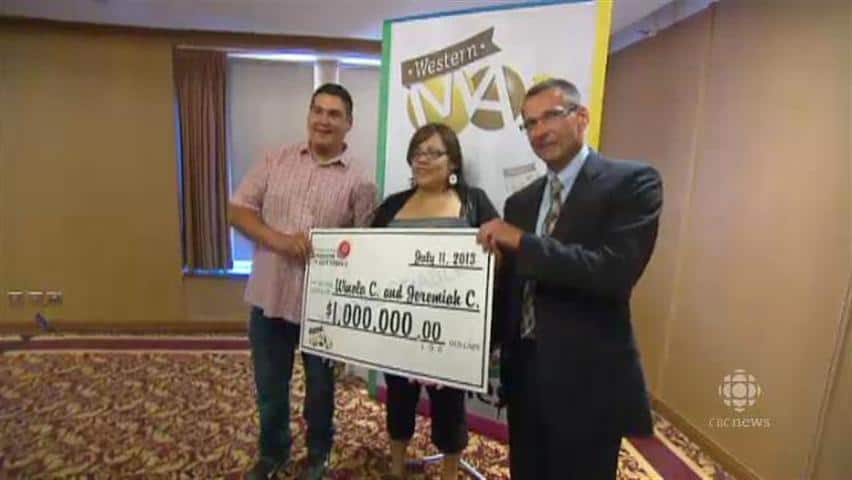 7 years agoVideo
1:47
Manitoba's newest millionaires are a couple from the Sagkeeng First Nation who won $1 million in a Western Max lottery draw. 1:47

Manitoba's newest millionaires are a couple from the Sagkeeng First Nation who won $1 million in a Western Max lottery draw.

Winola Canard and Jeremiah Courchene were all smiles when they were handed their cheque in Winnipeg on Thursday afternoon.

They become the first Manitobans to win $1 million in Western Max, a regional lottery game that launched in March.

Canard told reporters she had never bought a lottery ticket before, but she decided to buy some tickets for the June 21 draw at the Wal-Mart Good to Go on Empress Street.

She bought a $9 Max Pack that included a $9 Lotto Max ticket and a $3 Western Max ticket. Each ticket had three Quick Pick selections and had the Extra entered.

When another lottery retailer checked the tickets a couple days after the draw, Canard said it initially sounded like they had won $1,000, but the clerk said it might have been $1 million.

Canard and Courchene said they plan to build a home, start a cooking business, and maybe help out some community members in Sagkeeng.

As well, their young nephew wants to go to Disneyland, they added.

The couple is not the first from Sagkeeng to win big in a lottery. In fact, there have been three wins of more than $10,000 in less than five years.

Kirby and Marie Fontaine won $50 million in a Lotto Max draw in November 2009. As well, there was another Lotto Max win in October 2011 for over $13,000, according to the Western Canada Lottery Corp.

The publicity-shy Fontaines have donated to a number of good causes around Manitoba — often with little or no fanfare — since they won the $50-million prize.

In December, they gave $50,000 to the Winnipeg Christmas Cheer Board, virtually eliminating the organization's debt.

They have also sponsored a baseball tournament and donated to local causes on the Sagkeeng First Nation, located about 100 kilometres northeast of Winnipeg.