There is "extreme urgency" for a facility that offers round-the-clock refuge for sexually exploited women in Winnipeg, say organizers of a rally taking place Friday afternoon.

There is "extreme urgency" for a facility that offers round-the-clock refuge for sexually-exploited women in Winnipeg, organizers of a rally taking place Friday afternoon say.

"It's time the government realizes that if we don't heal our women, this has a direct effect on all of those kids that are in care. These women are somebody's mother, they're somebody's daughter, they're somebody's sister," said Isabel Daniels, one of the planners behind the march to the legislative building from the Oodena circle at The Forks.

"We need to save them from further violence."

The rally for the "extreme urgency for a safe space for sexually exploited adults" takes place from 1-4 p.m. The march will also stop at the Fort Garry Hotel where the national inquiry into missing and murdered indigenous women and girls (MMIWG) is taking place.

Daniels has lost people close to her due to violence, including her sister and her best friend. The death of her cousin, Nicole Daniels, made headlines after the 16-year-old girl's body was found face-down in snow behind a car rental agency in Transcona in 2009.

"We've actually been calling for a safe space for the last 30 years … but there's absolutely no services after 5 p.m.," Daniels said.

We've actually been calling for a safe space for the last 30 years … but there's absolutely no services after 5 p.m.- Isabel Daniels

Sage House is a daytime program only, while women who are victims of sexual exploitation do not qualify for domestic violence shelters so they're not accepted at Willow Place or Ikwe-Widdjiitiwin, Daniels says.

Daniels, who worked at Sage House for 2½ years, saw people sleeping under the facility's deck, under the wheelchair ramp or in the yard while waiting for help.

She wants to see a 24-hour facility that also offers services for addiction and counselling, life skills and living skills, and help clients to get solidly back on their feet with transitional housing .

Daniels says there are many young people aging out of the provincial child welfare system ill-prepared to live on their own, so they turn to the streets or gangs, leaving them vulnerable.

Young women are routinely attacked by rival gang members as part of initiation processes, she says.

The spike in methamphetamine use is also leading to more people being exploited as they look for ways to make money or make bad decisions while under the drug's influence, she says. They also become victims to others on meth, as the psychosis it causes prompts unpredictable and often violent behaviour.

"We have over 2,000 people — and that's a low-ball number — suffering with meth addiction," Daniels said, "but there's only 10 beds at detox. If people are never able to access services, how are they ever going to get off the street?

"So we're hoping to kind of have a universal approach when it comes to this 24/7 safe place."

Rally organizers intend to push the government for support, but will also look at other funding avenues or collaborating with existing agencies, Daniels says. 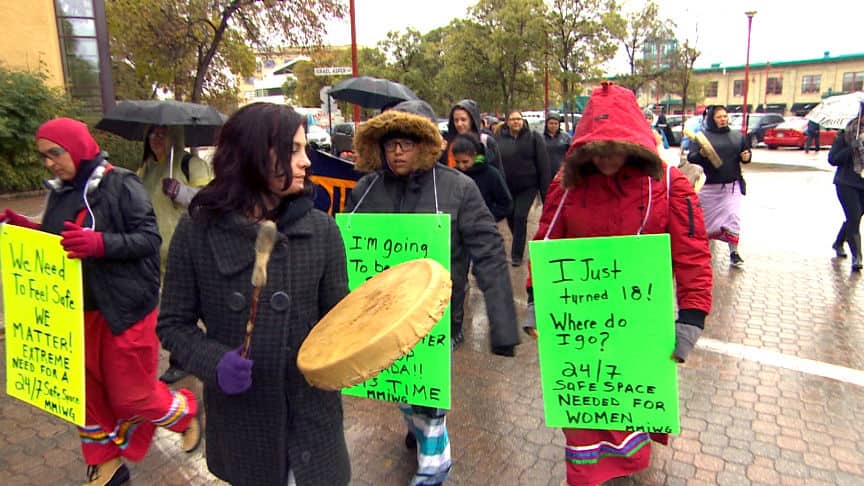 2 years ago
1:51
A group of survivors of sexual exploitation and human trafficking took to the streets today to raise awareness about the dangers women face everyday in Winnipeg. 1:51
CBC's Journalistic Standards and Practices|About CBC News