Winnipeg city council is set to vote on a new plan that will put millions into roadside safety measures, including collecting data on intersections that might pose safety issues.

Motion would use gas tax money for pedestrian, bicycle safety in city

Winnipeg city council is set to vote on a new plan that will put millions into roadside safety measures — but those still reeling from recent pedestrian deaths hope that turns into action soon.

"We have come to accept fatalities as a cost to the convenience of vehicle transportation. And I think that that is unacceptable," said Dorota Blumczynska, the executive director of the Immigrant and Refugee Community Organization of Manitoba (IRCOM).

Last month a four-year-old girl, named Galila, was hit and killed at a crosswalk on Isabel Street at Alexander Avenue, which is right near the IRCOM centre, where she was living.

Today a city committee unanimously voted in favour of a motion that would put $2.5 million from gas tax funding into proactive measures to protect the city's pedestrians and cyclists.

That motion now heads to council for vote April 25.

Some of the suggested measures include pushing Manitoba Public Insurance to provide the city with traffic data faster, and using existing traffic cameras throughout the city to better predict where potential accidents will occur.

"If [the city engineers] have access to the cameras, and are seeing incidents occur at intersections which are monitored by cameras, if there is proactive measures we can take before there's an injury or worse yet a fatality, let's see how we can better use those cameras to that end," Mayor Brian Bowman said.

The funding would be part of a total $40 million the city is expecting to spend on street renewal projects in 2019.

Winnipeg has had a string of pedestrian deaths in recent months across the city.

A week ago, a woman was run over by a construction truck while walking through a mall parking lot. Last month, a man was hit and killed while crossing Osborne Street. In January, a woman was killed when she was hit by a car near Polo Park shopping centre.

Then there is Galila, the four-year-old girl whose family had recently immigrated to Canada. She and her mother were using the crosswalk on Isabel Street when they were both hit.

Blumczynska, who has been advocating for more safety measures at the crosswalk since the incident, said drivers are still blowing through the flashing amber lights, even while the memorial for the little girl is still there.

Despite calls for action, Blumczynska said say nothing has been done to improve the crosswalk since her death.

"We have already heard in the last three weeks since the accident, repeated reports from our community members... that the vehicles are not slowing down, that the crosswalks are being activated and are being ignored," Blumczynska said.

"The pedestrian will make it only halfway through one part of the crosswalk… before a vehicle speeds behind them. That is completely unacceptable, and I know that there continues to be enormous fear."

The recent pedestrian deaths — like Galila's at the intersection on Isabel Street —-are a warning that something needs to be done right now, she said.

"I would encourage the city to move fast, and consider anything and everything they can do in the interim."

Earlier in the week, a different city committee voted to study the specific intersection over the next three months to see if something should be changed.

Blumczynska said she wants action soon, as many of the new immigrant families she works with are now scared to use the crosswalk where the little girl died. 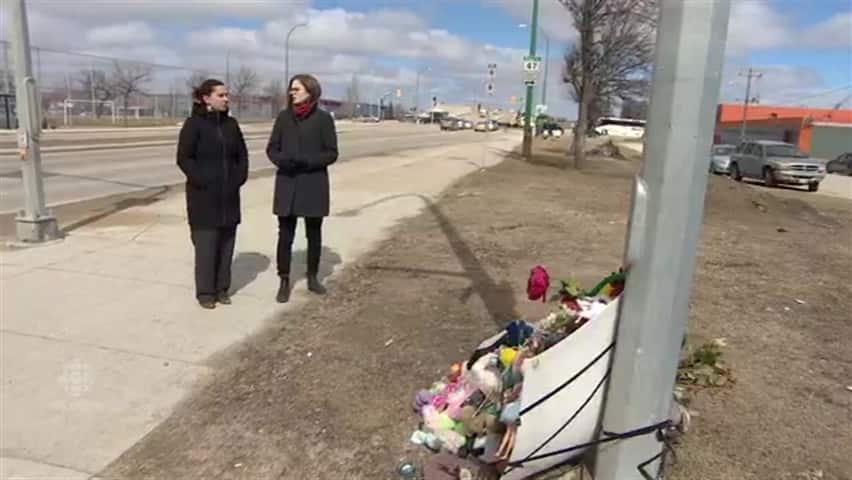 2 years ago
2:09
Winnipeg city council is set to vote on a new plan that will put millions into roadside safety measures — but those still reeling from recent pedestrian deaths hope that turns into action soon. 2:09