Manitoba New Democrats are promising to create 50,000 new jobs and spend more than $6.6 billion in strategic infrastructure projects during their first term in office if elected next month. 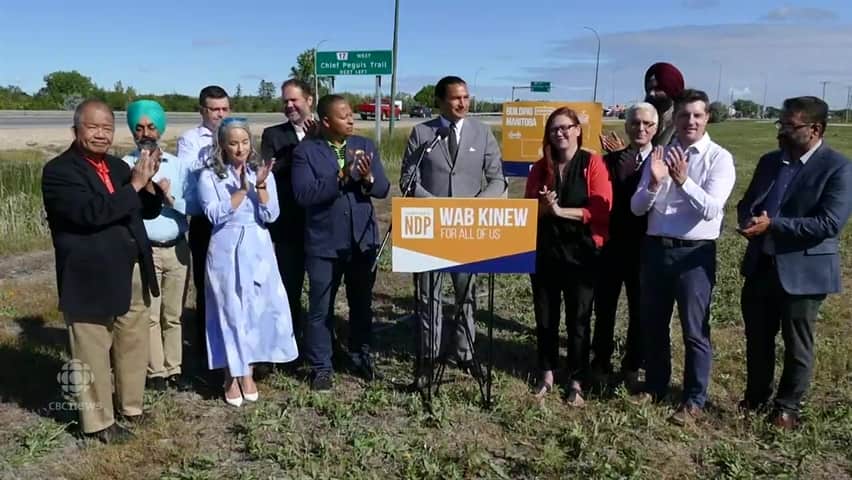 Manitoba New Democrats are promising to create 50,000 new jobs and spend more than $6.6 billion in strategic infrastructure projects during their first term in office if elected next month.

NDP Leader Wab Kinew made the promise Wednesday morning in Winnipeg near the Chief Peguis Trail, which he said New Democrats would make a priority to expand while working with city hall.

Kinew said the $6.6 billion figure is $690 million more than the Pallister government has allocated toward strategic infrastructure, which would pay for new roads, hospitals and child-care centres, for example.

The NDP said the money will be split in three ways: 37.5 per cent will go toward roads, highways, bridges and water-related infrastructure and transportation projects.

'It is an excellent number'

The NDP said the jobs will be divided among these projects, and Kinew said the 50,000 new jobs that he's promising to create isn't an exaggeration.

"I studied economics. That was my first degree, and I can tell you that there is a standard formula that every public accounts department uses when they calculate the job creation rate per dollar invested on infrastructure."

The Manitoba Heavy Construction Association is happy infrastructure is becoming an election issue, saying it's an important pillar in building the economy.

But association president Chris Lorenc said what's really needed is a commitment from party leaders to establish a working group that reviews how Manitoba funds infrastructure.

"We need a long-term plan. Throwing numbers is fine for political purposes but what the system needs is a plan," he said.

"I don't expect and don't read really anything into news releases because I'm not certain that the news releases are tied to any demonstrated or committed plan."

Company lays off workers due to cuts

Lorenc said the Pallister government's cuts to his industry have hurt construction companies.

"I don't think it's a secret that bids for work this year are the lowest that certainly I've seen in my years with the association. That companies are bidding cash flow to stay afloat in the hope that the current levels of investment in our provincial programs and by extension municipal programs are a blip and not the norm," he said.

"If it remains the norm, you're going to see more companies doing what we have just seen done."

Lorenc pointed to Hugh Munro Construction as an example — the company, which has been in business for 60 years, said it put close to 1,400 pieces of equipment up for auction last week as it continues to downsize due to budget cuts.

"The budget cuts have very much affected a company like ourselves," owner Colleen Munro told Radio-Canada.

She said her company used to employ more than 350 people, and now that number is less than 100 due to cuts. She understands the need to balance a budget but has had to lay off people due to the lack of work for them on road projects and is now switching gears to work on other business ventures.

After Wednesday's announcement, the Progressive Conservatives said in a release the New Democrats "can't be trusted when it comes to infrastructure."

"I can tell you the NDP's platform is like Swiss cheese. There is enough holes in it to drive a truck through it, to be quite frank with you," said PC candidate Scott Fielding, who was a little less eager to talk about construction job losses at Munro.

"My message to Manitobans is that we want more affordability, and we want to grow the economy by over 40,00 people," Fielding said, when pressed twice on his message to the company.

The PCs say during its last term in government, the NDP under spent its infrastructure budget by an average of 28 per cent each year — except the year before the 2016 election.

The Tories say they've invested more than $1 billion annually in strategic infrastructure, and "we will continue to make meaningful investments to improve Manitoba's roads, schools and hospitals."

"They are playing the same game with numbers that the Pallister PCs have been doing — they are padding their budget by adding stuff that is necessary, but is not at all strategic. They will not make Manitoba greener, add to the economy, or save money. Many of these are projects that were already in the works, and there is nothing new about them," he said in a statement.

The Liberals said they will be releasing their plan on strategic infrastructure shortly and pointed out they have already committed to $500 million to save Lake Winnipeg and will fund a study into rail relocation for Winnipeg.