In River Heights-Fort Garry, a former councillor with a colourful past tries to wander out from the wilderness

River Heights-Fort Garry is the only Winnipeg ward where the election contenders include both a current and former councillor, each of them possessing nine years of experience at city hall.

Fourteen years ago, Garth Steek wandered into the political wilderness, his reputation tattered by a series of missteps at city hall.

The former River Heights-Fort Garry councillor was kicked off executive policy committee by former mayor Glen Murray and criticized for his role in the events examined by an audit City of Winnipeg real-estate transactions.

He was forced to repay the city thousands of dollars for credit-card expenses he initially claimed were incurred on city business.

And he became the first municipal election candidate ever convicted in Winnipeg for failing to file audited campaign expenses.

"I think all of us learn from our mistakes," said the 69-year-old former councillor, who's hoping to knock off incumbent John Orlikow in the municipal election slated for Oct. 24.

River Heights-Fort Garry is the only Winnipeg ward where the election contenders include both a current and former councillor, each of them possessing nine years of experience at city hall.

It's also a proxy battle between incumbent mayor Brian Bowman, who counts Orlikow as an ally, and rival mayoral candidate Jenny Motkaluk, who has a Garth Steek sign on the lawn of her Wellington Crescent neighbourhood home and shares policy positions with the council candidate.

Steek, who went to work for the Manitoba Home Builders Association after leaving council and has more recently appeared at city council meetings as a delegate opposed to Bowman policies, said one of his motivations to return to politics was council's decision to fast-track the approval of growth fees in 2016.

The fumbled plan to extend Sterling Lyon Parkway through a semi-rural neighbourhood south of Wilkes Avenue also played a role in his desire to return to 510 Main St.

Steek, however, said crime is the No. 1 issue in River Heights-Fort Garry. He said the Winnipeg Police Service needs to be granted more resources and blames Orlikow for inaction on the file.

"I like John personally, but I don't think he's been effectual. I think that what happened is, crime and safety has not been a prominent consideration of his," Steek said in an interview at a Crescentwood street corner during a short break in his campaigning.

Orlikow said crime is being addressed both through police efforts to analyze break-in data and community efforts to compile that data.

He said he does not believe his constituents should replace him with Steek but only offered oblique criticism of his predecessor's record.

"My personal opinion is this would be a step backwards for Winnipeg. We need to be moving forward with people that are dedicated to the public service and the idea of serving," Orlikow said in an interview in his Crescentwood home.

In 1999, former Winnipeg mayor Murray kicked Steek off EPC and removed him from the chair of council's property committee while city auditor Shannon Hunt was examining his role in a series of contentious Winnipeg real-estate deals.

The audit also concluded Steek's committee tried to play property owners off each other to spark a bidding war for another property.

At the time, Steek defended his actions vociferously, arguing city staff were inefficient. He still maintains he was not a subject of Hunt's audit.

"I don't think I ever came under any criticism there, but I think what's most important of all is if you want to look at an audit, the real audit the people want to talk about today, 14 years later, is the Sterling Lyon Parkway," he said, referring to a project audit that was released earlier this year.

Steek said his troubles with Murray — and former mayor Susan Thompson before that — stemmed from his independence.

"I wouldn't vote the way I was told to vote. I want to make it abundantly clear that I'm not anybody's yes man. It's a case of I don't believe in the strong mayor model that we have here, because it relegates half of council to the backbenches."

Steek takes no issue, however, with published accounts of the spending and campaign-finance issues that dogged him shortly after he left city hall.

In 2004, he charged up about $16,000 on his city credit card during 20 weeks in office, including $3,132 during the final two weeks before he resigned to make an unsuccessful run for mayor.

When Steek's expenses were made public in 2005, the city demanded he repay about $9,000 worth of expenses. Steek eventually agreed to repay the city for $2,115 as part of a deal struck with a city lawyer in 2006.

The same year, Steek pleaded guilty for failing to file audited campaign expenses for his 2004 mayoral run and paid a $1,155 fine. As the first person convicted in Winnipeg for the offence, he complained he had been singled out.

"When you start abusing your position like, you know, the credit card fiasco, for instance, then you lose the public's trust, period. And there's no way you can get that back," Lenko, 61, said in an interview in his home in Fort Garry's Maybank neighbourhood.

Lenko, who used to run a dance studio and has spent decades renovating houses, said he was motivated to run for office because he says Orlikow has failed to hear constituents' concerns about the subdivision of city lots.

"We weren't getting the action from the councillor we have right now and I figured I would step in, so there would be a voice for the people," said Lenko.

Lenko has a lengthy record as the subject and object of civil litigation, including a fight with Manitoba Hydro, a suit over a residential home-improvement program and one of the first challenges of the city's use of red-light cameras.

"I learned a long time ago, if you have a problem, take it to court. That's what they're there for," he said.

Orlikow said his No. 1 priority in the next council term is the widening of Kenaston Boulevard and said he's proud of his own record as council's property chair, claiming council has taken "control from more of a developer-driven agenda, to more of a city agenda" over the past four years.

Orlikow's ability to campaign for re-election and serve as councillor has been hampered in recent weeks. His brother died in September, after a short illness.

"People want service regardless of what you're going through internally so you just have to have that fortitude inside to compartmentalize and do the job that's in front of me and then also have time to grieve with my family on the side," he said.

"I have good days and bad days. Sometimes my campaign team sees me and says 'You're not going out of the door today.'" 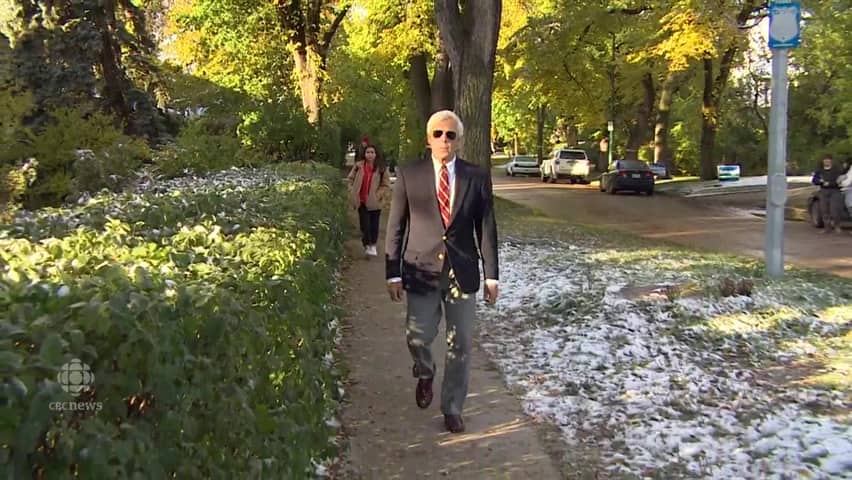 2 years ago
2:23
The election race pits incumbent John Orlikow, who has served for nine years against Garth Steek, who served nine years in the same ward two decades ago. 2:23