Canada's Man in Motion, Rick Hansen, says more should be done to make the Manitoba Legislative Building truly accessible to everyone, including visitors, staff and politicians with disabilities.

'It's not about just getting in the building,' Hansen says after tour with MLA Steven Fletcher 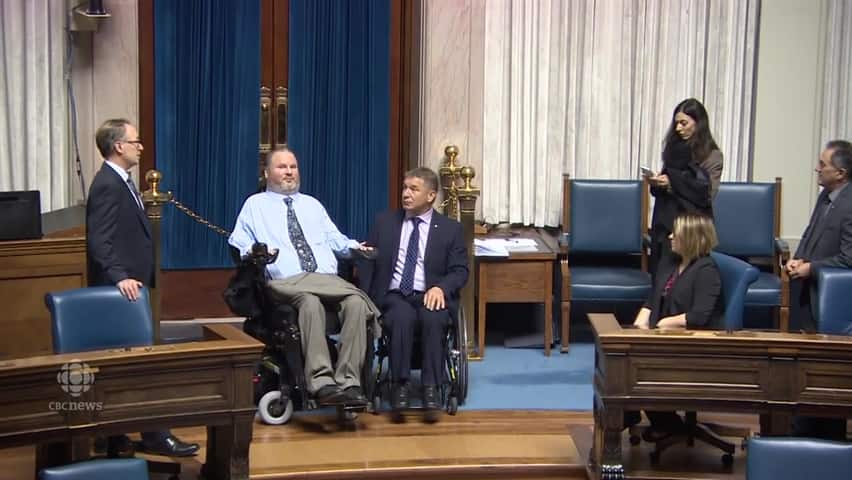 Rick Hansen on improving accessibility at the Manitoba Legislative Building

4 years agoVideo
1:19
Canada's Man in Motion tours the Manitoba Legislative Building with MLA Steven Fletcher, who has voiced concerns about a lack of true accessibility in the building. 1:19

Canada's Man in Motion, Rick Hansen, says more should be done to make the Manitoba Legislative Building truly accessible to everyone, including visitors, staff and politicians with disabilities.

The well-known Canadian wheelchair athlete and CEO of the Rick Hansen Foundation met on Wednesday with Progressive Conservative MLA Steven Fletcher (Assiniboia), who gave him a tour of his office and the chamber.

Fletcher, who is quadriplegic and uses a wheelchair, has been frustrated with the lack of wheelchair access inside the legislative building — especially in the chamber, where MLAs gather for question period.

Wheelchairs cannot access the centre of the chamber, a sunken area often called "the pit" where the clerks and the front benches are located, because it has stairs.

Hansen said the legislative building has seen improvements over the years, specifically noting the front entrance ramp that was added by then-premier Gary Doer's government.

"It's 2017, and our expectations have changed," Hansen said.

Hansen said having a program for certifying accessible buildings, similar to the LEED program for green building certification, would encourage building designers to create spaces that are more inclusive.