MTYP's Charlie Brown double bill, which brings together You’re a Good Man, Charlie Brown and the stage adaptation of the 1965 TV classic A Charlie Brown Christmas, is a lot like Chuck himself — it’s not flashy and it doesn’t always hit a home run, but it’s awfully likable all the same.

Poor Charlie Brown — he can't pitch a winning game, get his kite to stay in the air or kick a football.

Still, everyone seems to agree he's a good guy.

And Manitoba Theatre for Young People's Charlie Brown double bill, which brings together the 1967 musical You're a Good Man, Charlie Brown and the stage adaptation of the 1965 TV classic A Charlie Brown Christmas, is a lot like that, too. It's not flashy and it doesn't always hit a home run, but it's awfully likable all the same.

You're a Good Man… is a perennial high school and community theatre group favourite, and for pretty good reason — it's not too challenging for either audience or theatres, and director Pablo Felices-Luna keeps it pretty simple.

He does, though, smartly stage it in the round — with the audience surrounding the stage on four sides — giving the unassuming show a pleasant intimacy.

And it is unassuming — there's not a lot of story to You're a Good Man…, really. Rather, it's a series of vignettes and tunes that show us a day in the life of lovable loser Charlie Brown (Peter Fernandes, great at capturing the decency that makes everyone love a sad sack like Chuck).

Whether you grew up with the Peanuts comics or not, the characters will feel familiar; they're really just a bunch of kids with their own quirks, and they're easy to connect with here.

They all get their moments to shine through Clark Gesner's tunes — again, likable, if not terribly memorable.

And that sums up much of You're a Good Man…. It's a slight musical (clocking in at just over an hour) and frankly, it's not the greatest piece of musical theatre. But it's delivered with energy by a strong cast, and its ending note — that there's happiness to be found all around, even for good ol' Charlie Brown — is a positive message for kids.

It's also a good set-up for the much shorter part of the double bill, but in many ways the main draw: A Charlie Brown Christmas. This stage version, like the animated TV special it's based on, runs under a half hour, and again, isn't heavy on plot.

It follows Charlie Brown, depressed by the commercialization of the Christmas holiday, in his efforts to find the Christmas spirit, which he does as he takes on directing the school Christmas pageant — and once again, gets a little help from his friends.

Much of the appeal of A Charlie Brown Christmas for many is Vince Guaraldi's music, and the cast do a fine job delivering it, as does a trio of excellent musicians including music director Paul De Gurse (who also plays the Beethoven-loving Schroeder here), bassist Marie-Josee Dandeneau and percussionist Ryan Voth. They deliver Guaraldi's jazzy takes on traditional tunes and originals like the bittersweet Christmas Time is Here with gusto and style.

Again, the musical itself is pretty slight, but it ends on a up note for Chuck and the Peanuts gang that beautifully captures the spirit of togetherness and finding happiness in simplicity that really seems to be at the heart of why Charlie Brown and his pals have endured for so many decades.

In all, it makes for a satisfyingly charming double bill. It does come, though, with a not-terribly-kid-friendly running time of around 90 minutes. There's a short stretch break between shows, along with some smartly placed opportunities to join in the dancing during A Charlie Brown Christmas and a few opportunities for kids in the audience to get up and help the gang. 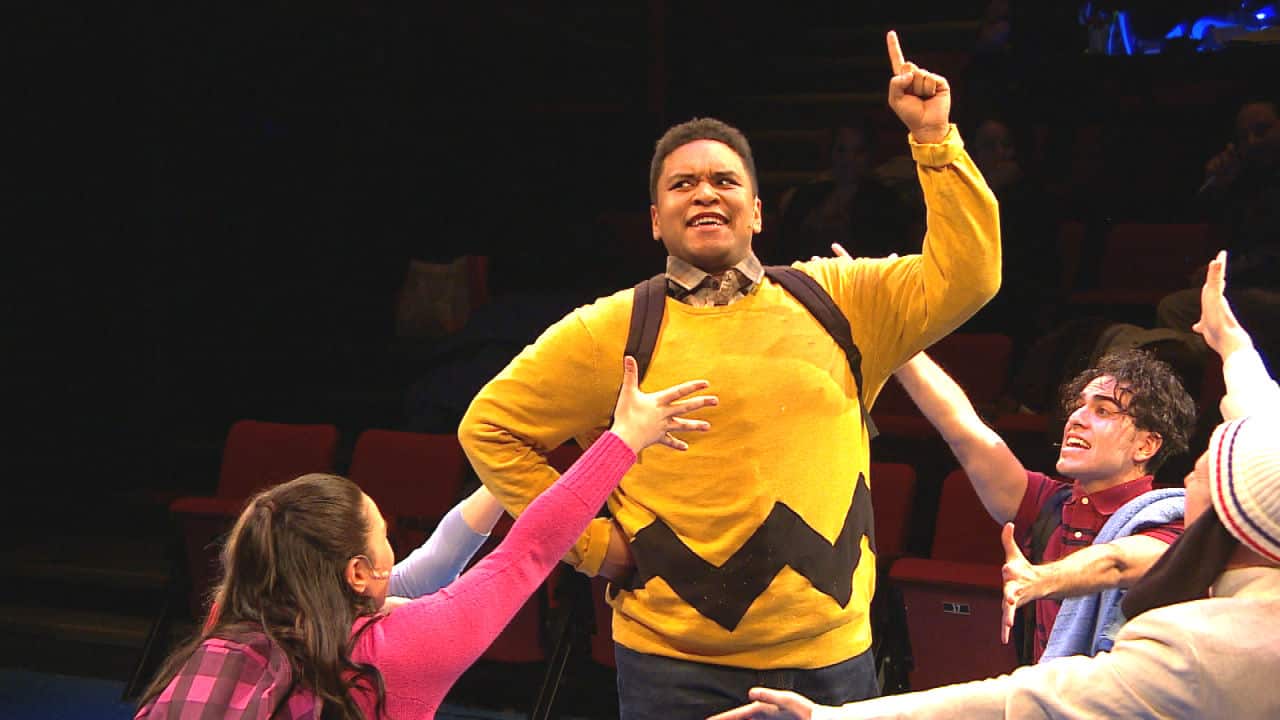 But the running time — and a few sometimes talky scenes, like Charlie Brown's check-ins with resident psychiatrist Lucy — may be deal-breakers for very young kids. Though MTYP is recommending it for ages three and up, I'd say it'll probably play best for the elementary school-aged crowd.

And really, this show is very much for them, being as it is a story about finding happiness in the sometimes confusing and challenging world of being a kid.

Charlie Brown is indeed a good man — and in his own Charlie Brown-y way, a pretty good role model, it turns out.