'No one chooses to be a refugee': Manitoba refugees share stories, tackle misconceptions

Refugees who now call Manitoba home came together to share their stories in Winnipeg on Tuesday night.

People who now call Manitoba home but came to Canada as refugees shared their stories in Winnipeg on Tuesday night to expand the conversation around the recent increase in refugee claimants and asylum seekers.

Louise Simbandumwe, a volunteer with Amnesty International, said the event was held to "talk about the need to ensure that we have a compassionate and human rights-based response."

Refugee Claimants: The stories behind the headlines was an event put on by Amnesty International Winnipeg at the Immigrant and Refugee Community Organization of Manitoba offices on Isabel Street.

Simbandumwe said it's important to share the stories of people who have gone through hardship to find safety and security in Canada.

She became a refugee in 1972 after family members were killed in massacres in Burundi, a country in East Africa bordered by Rwanda, Tanzania and the Democratic Republic of Congo. She was with her parents in India at the time, and they learned they wouldn't be able to return home because their lives were at risk.

Wearing a black shirt with clear white text that said "human rights extremist," Simbandumwe​ spoke about how an increase in refugee claimants and asylum seekers has generated a lot of discussion and debate.

"But there's also a lot of information that is floating around that's simply false or incorrect, and some people are responding with fear and hostility," she said.

"A lot of people are responding with compassion and kindness."

In the first four months of this year, the RCMP intercepted 2,719 asylum seekers, federal government figures state. Throughout all of 2016, 2,464 were apprehended.

The snow-covered fields around the Emerson, Man., border have become a pathway for many of the asylum seekers hoping to make a refugee claim in Canada.

"Being a refugee is not a choice. No one chooses to be a refugee. It is imposed by different tyranny governments and people are escaping their own governments," he said.

Originally from Ethiopia, Saeed came to Winnipeg as a refugee nearly 33 years ago.

He said refugees are not a burden on society; they are an integral part to a good economy.

It was only in April that Hazim Ismail found out his refugee claim was accepted. He came to Winnipeg as an international student four years ago but, as a gay man, his life was put at risk when he was outed back home in Malaysia.

"Experiences differ from person to person but I know it is very anxiety inducing to not be certain of your future," he said.

"I hope for the best for the people whose claims are going through because I know it can be months of waiting, months of uncertainty and you don't know how to plan for the future."

Beyond sharing stories, the Winnipeg event was also to talk about the Safe Third Country agreement.

Under the agreement, Canada generally does not accept refugee claimants coming in from the U.S., but there are exceptions. Canada is also a signatory to the United Nations Refugee Convention, so those who irregularly cross into the country — meaning they enter somewhere other than a border crossing — can be given permission to make a claim here.

"If Canada was to rescind the Safe Third Country agreement that would solve a lot of the issues. That's part of what we are advocating for," Simbandumwe​ said. 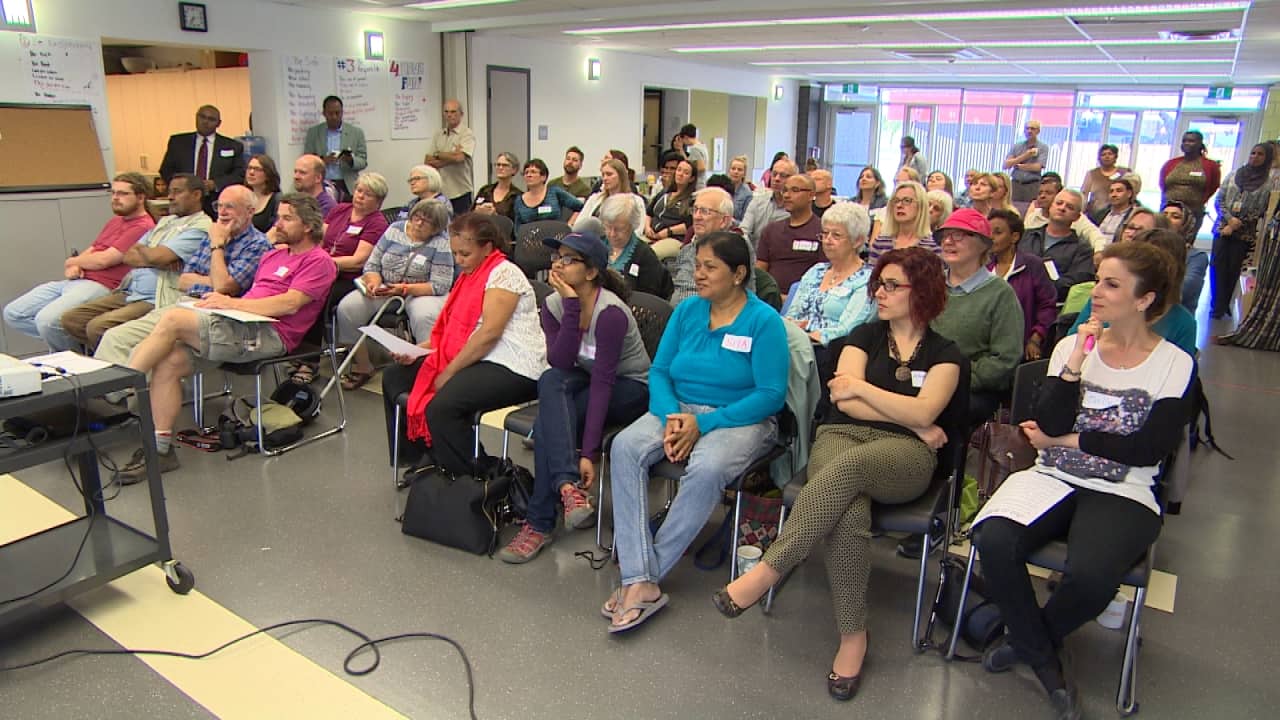 3 years ago
0:32
People who now call Manitoba home but came to Canada as refugees shared their stories in Winnipeg on Tuesday night to expand the conversation around the recent increase in refugee claimants and asylum seekers. 0:32

with files from Erin Brohman