The hot, dry weather over the summer has taken a toll on the city's tree population, making it more vulnerable to disease and insects, the city says.

Winnipeg's embattled tree population faced-off against yet another foe this past summer that has left it more susceptible to disease: the record-setting dry heat.

With heat levels not seen in the last 40 years and precipitation levels at nearly half of what we would normally expect during the summer months, trees are under significant stress, says the city's forester.

"If there are trees that are water-sensitive or that require a little bit more moisture in general, then those are the trees that are going to be showing the signs of stress," said Martha Barwinsky.

Similar to a depressed immune system in humans, when trees struggle to thrive they are most vulnerable to disease and infestation like Dutch Elm disease, the emerald ash borer and the cottony ash psyllid, also known as jumping tree lice.

First spotted in city trees last year, the tree lice was considered low risk at the time. But with a year's worth of surveying, Barwinsky said about 700 black ash trees — the preferred host of the insect — are now dead or in severe decline.

"This is the trend we're seeing. We're experiencing dryer conditions and that places the ash trees under more stress, and at the same time, those kinds of conditions are also very favourable to the development of the cottony ash psyllid," she said.

Those trees are now tagged and slated to be cut down, with the main concentration being found in the neighbourhoods of Riverview and River Heights.

It's been nearly a year since the city found its first confirmed case of emerald ash borer beetles in Manitoba, in a boulevard tree on Cote Street, in Winnipeg's St. Boniface neighbourhood, last November.

Barwinsky's team has since removed 13 infected trees from that immediate area and has found another infested tree along nearby Marion Street. 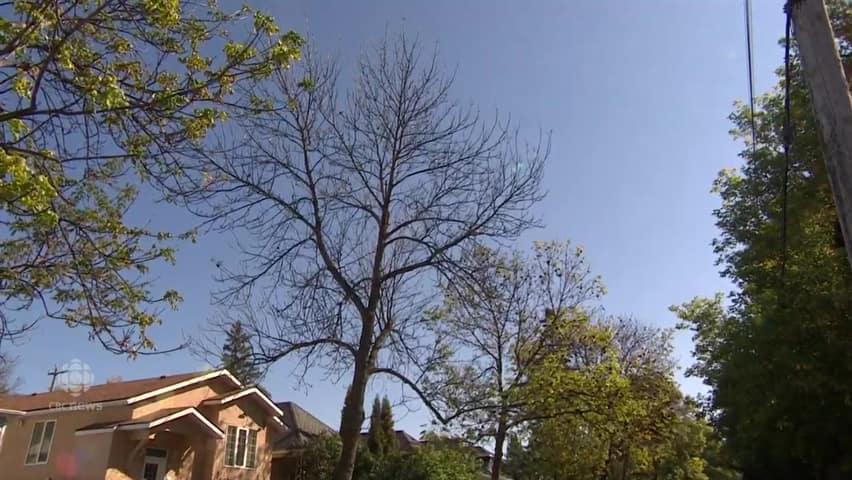 2 years ago
2:13
Winnipeg's embattled tree population faced-off against yet another foe this past summer that has left it more vulnerable to disease: the extreme dry heat 2:13

The city's insect control branch assisted with the installation of 200 traps throughout the city this past year and found two borer beetles: one near the existing ground-zero location and another in neighbouring Windsor Park.

"We know it's in other neighbourhoods … but it just reinforces the fact that [the emerald ash borer] is a difficult pest to detect," she said.

As part of their proactive plan to tackle the beetle's spread, certain ash trees are being strategically removed to create buffers and more than 1,000 have received a vaccine-like injectable insecticide treatment.

With the city's multi-front battle against threats to its leaf canopy, keeping up with the removal of diseased trees is not an easy task.

At this time last year, 8,700 trees were tagged for removal. Today, about 500 of those trees have yet to be cut down, in addition to the 6,000 new dying trees added to the list over the past nine months.

The city's receding tree canopy: every removed tree between 2013 and 2017

"In the past three years in particular, we've actually seen a significant backlog build up. We were really grateful this year, we actually received a large influx of funding through the capital budget from council to address that backlog," said Barwinsky

The goal for the next three years is to eliminate the backlog and shift the focus to slowing down the spread.

Homeowners can help alleviate the stress trees are under by ensuring they are kept well-hydrated during droughts, Barwinsky said. However, many people may not realise how to properly water their mature trees.

"Its important to understand where the roots that take up the water are located. It's not at the trunk," she said.

The fine fibrous roots that efficiently absorb moisture are found around the radius of the trunk, at or even beyond the footprint of the tree's canopy.

Jacques Marcoux is a former CBC News investigative reporter specializing in data analysis. He continues to contribute to CBC News.