The RCMP's Underwater Recovery Team has come up empty after completing an exhaustive search of the Nelson River in northern Manitoba for signs of two fugitives wanted in connection with three homicides in northern British Columbia.

The RCMP's Underwater Recovery Team has come up empty after finishing an exhaustive search of the Nelson River in northern Manitoba for signs of two fugitives wanted in connection with three homicides in northern British Columbia.

The dive team joined the search Sunday, but finished its work and won't be conducting any further dives, RCMP said in an email statement on Monday morning.

Police said there have been no other significant developments overnight in the hunt for Kam McLeod and Bryer Schmegelsky.

The Underwater Recovery Team has completed their work following the discovery of a boat on the shore of the Nelson River. They will not be conducting any additional dives. A police roadblock has been put in place today in the Sundance, MB, area for ongoing search efforts. <a href="https://twitter.com/hashtag/rcmpmb?src=hash&amp;ref_src=twsrc%5Etfw">#rcmpmb</a> <a href="https://t.co/mKSR7xieVh">pic.twitter.com/mKSR7xieVh</a>

The decision to enlist underwater divers came just days after the Mounties began winding down their search for McLeod, 19, and Schmegelsky, whose 19th birthday was Sunday, in the bush and swamp around Gillam, Man., where the last confirmed sighting occurred on July 22.

The two are wanted in connection with the deaths of Lucas Fowler and Chynna Deese, two tourists shot down near Liard Hot Springs, B.C. Police have also charged them with second-degree murder in the case of Leonard Dyck, a professor found dead near Dease Lake, B.C.

Searchers scouting the area from a helicopter discovered the rudimentary, flat-bottomed silver boat on the shore of the Nelson River on Friday, which prompted the dive.

Early Sunday afternoon, divers set off from a sloped patch of forested terrain hugging the Nelson River, hauling scuba tanks and settling into a boat before they departed. Meanwhile, a helicopter scoured the river from overhead.

The rapid river, which flows quickly and powers several hydroelectric dams vital to the province, is hundreds of metres wide.

Divers spent hours Sunday afternoon searching the northern Manitoba river near the spot where the damaged aluminum boat washed up in hopes there may be clues to the men's whereabouts.

The underwater team wrapped up its search Sunday at about 5 p.m. CT.

An interim roadblock was set up near Sundance Creek, a community originally built to house workers at one of three major hydroelectric projects in the area, to allow officers to conduct additional searches in the area. The blockade was removed by mid-afternoon Monday.

Sundance Creek is located about 48 kilometres northeast of Gillam, the northern town at the centre of the hunt for the two fugitives.

The deputy mayor of Gillam spoke about the focus on the town, about 740 kilometres north of Winnipeg along the Hudson Bay railway between Thompson and Churchill. The town is only accessible by VIA Rail passenger trains and Provincial Road 280 year-round, as well as by boat and trap lines in the area.

John McDonald said, "It shone a spotlight on the town of Gillam that we really didn't need."

A large proportion of First Nations living in the area were set on edge with the influx of media, military and police, McDonald said. Military aircraft, drones and sniffer dogs circling the area led to elevated levels of anxiety among community members, many of whom had already experienced trauma from a difficult past and a history of strained relations with the RCMP.

"I don't think the community needed more pressure that got brought on them," McDonald said.

While the military has pulled out and the RCMP has scaled back search efforts, the community remains on high alert.

"The word went out quite rapidly to keep your eyes open, start locking your doors, be more conscious of who's in the neighbourhood, who's around your house, strangers and things like that," McDonald said.

The roads in town have been quiet and isolated since residents received warning that the fugitives could be hiding in someone's home, shed or back alley. Community members are a little more cognizant of their safety as the local government mulls the possibilities of increasing its own security measures.

McDonald said some high-security communities in other places have installed cameras on "every corner," which he considers a catch-22.

"It would have to get fired up right away," McDonald said, about the neighbourhood watch group. Council has not met to discuss it yet. McDonald assumes it and other safety proposals will come up at the next council meeting this month.

"There's actually nothing that's going to be totally foolproof but you do the best you can do," he said. 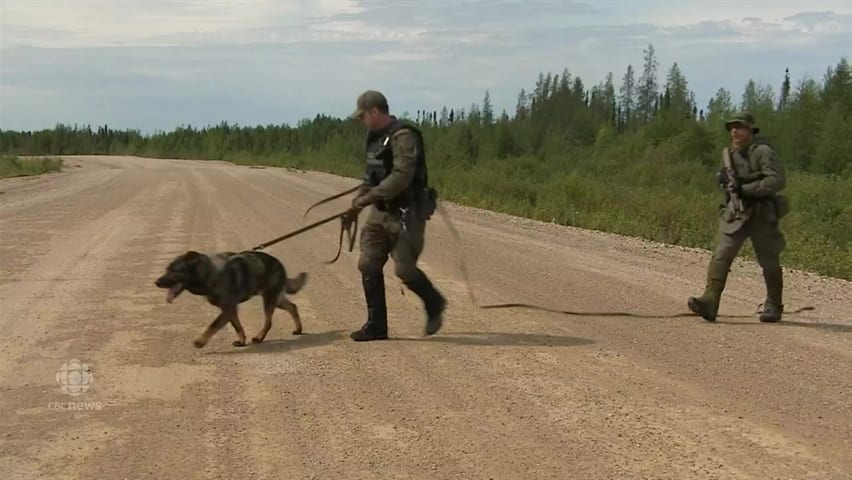 Normalcy returns to Gillam but a smaller search continues

1 year ago
1:54
For 10 days, all eyes have been trained on the small northern town of Gillam, Man., where RCMP have concentrated their search for two suspects in three killings in B.C. Now, as the force begins to reduce its presence in the area, the community is split between a desire for continued security, and hopes life can soon get back to normal. 1:54

With no recent sightings and a lack of new leads, residents remain tense.

"Maybe this is our new norm, you know, until it's determined that they've actually left the area, or they're no longer a threat. This could be it. Who knows."

With files from Angela Johnston, Ian Froese and Samuel Rancourt