A police identification expert testified in a Winnipeg courtroom that there is no forensic evidence linking Raymond Cormier to Tina Fontaine, a 15-year-old Indigenous girl whose body was pulled from the Red River in Winnipeg in 2014.

Read our live coverage of the trial here.

A police identification expert testified in a Winnipeg courtroom on Wednesday that there is no forensic evidence linking Raymond Cormier to Tina Fontaine, a 15-year-old Indigenous girl whose body was pulled from the Red River in Winnipeg in 2014.

Const. Susan Roy-Haegeman told Court of Queen's Bench the case was "very different than any of our investigations" and that police were starting from zero because the location where Fontaine's death took place hadn't been identified.

All investigators had to work with was "Tina herself" and a water-soaked duvet cover, Roy-Haegeman told the courtroom.

Cormier, 55, has pleaded not guilty to second-degree murder in the death of Fontaine, whose body was found on Aug. 17, 2014, near the riverbank north of the Alexander Docks. The trial is being heard by a jury of eight women and four men before Court of Queen's Bench Chief Justice Glenn Joyal in Winnipeg.

Fontaine's death sparked community-level movements aimed at solving missing persons cases, including the Bear Clan Patrol citizen group, and ignited calls across the country for a national inquiry into missing and murdered Indigenous women and girls.

On Wednesday, the third day in what's expected to be a five week-long trial, the Winnipeg police identification expert explained how she and her colleagues tried to find DNA evidence on the duvet that was wrapped around Fontaine and filled with rocks — weighing 25.5 pounds — when her body was located.

She said water and decomposition can affect the ability to collect DNA evidence.

Four foreign fibres were found on the duvet and sent to an RCMP lab in Edmonton for testing, Roy-Haegeman said. Other areas of the duvet, which lit up under a fluorescent light used to find bodily fluids, were also removed and sent to a different RCMP forensic lab.

On Monday, court heard Fontaine was wrapped in a type of duvet cover that investigators later learned was sold only at Costco, and the Crown believes one such cover was owned by Cormier.

Fibres from those blankets were sent to an RCMP lab to be compared to the fibres found on the duvet, Roy-Haegeman said.

Identification experts also took DNA samples from a truck that the Crown says was reported stolen by Fontaine two days before she disappeared, court heard. On Monday, the 911 call reporting the theft was played for the jury. Ross said it was Fontaine's voice reporting a truck that was stolen by her friend, "Sebastian" — an alias the Crown attorney said Cormier used.

The identification expert also testified about a tent seized from Alexander Avenue, near Sherbrook Street, on Aug. 29, 2014, which police believed Cormier had lived in. She said police investigators learned it had been some time since Cormier lived in the tent behind the Alexander Avenue home, but a cigarette butt and fibres from a rug were sent to be analyzed.

During cross-examination, defence lawyer Andrew Synyshyn asked the police officer whether she knew Cormier was a suspect when the tent was seized. She couldn't say whether she knew at the time.

He also asked whether police felt pressure to close the case because Fontaine's death had attracted so much attention. He pointed to a form from Roy-Haegeman's supervisor to an RCMP lab that said Winnipeg police needed results expedited because the death had garnered international headlines in newspapers and spurred calls for an inquiry into missing and murdered Indigenous women.

Roy-Haegeman said police want to solve every case and the comments were likely intended to get the lab, which is always busy, to accept more exhibits and provide results faster.

Synyshyn asked the witness if it was correct that after all of those resources were used, police still didn't find a DNA link between Cormier and Fontaine.

Court also learned that Cormier was arrested by police on Oct. 1, 2014 but was not charged and was released.

Cause of death unknown, pathologist says

Earlier in the day, jurors held their hands in front of their faces and one wiped away tears as they looked at photos of Fontaine after the Indigenous girl's body was pulled from the Red River.

Pathologist Dennis Rhee told court Fontaine was wearing a skirt, shirt and running shoes when she was found wrapped in the duvet filled with rocks. But because her body was so decomposed, Rhee, who performed the autopsy on the teenager's body, said he couldn't find a cause of death. He also estimated she died between three and seven days before her body was found.

Rhee described the state of decomposition of the body, which created challenges during the autopsy, but said there was no indication Fontaine had been stabbed or strangled. There didn't seem to be any health reasons for her death, he also said.

While he described Fontaine's body, her family members in the courtroom started to quietly cry and pass around a box of Kleenex. Cormier, sitting in the witness box, leaned forward slightly to hear the testimony.

The questioning then turned to gabapentin, a drug designed to treat epilepsy, which is sometimes used recreationally to get a slight euphoric high. 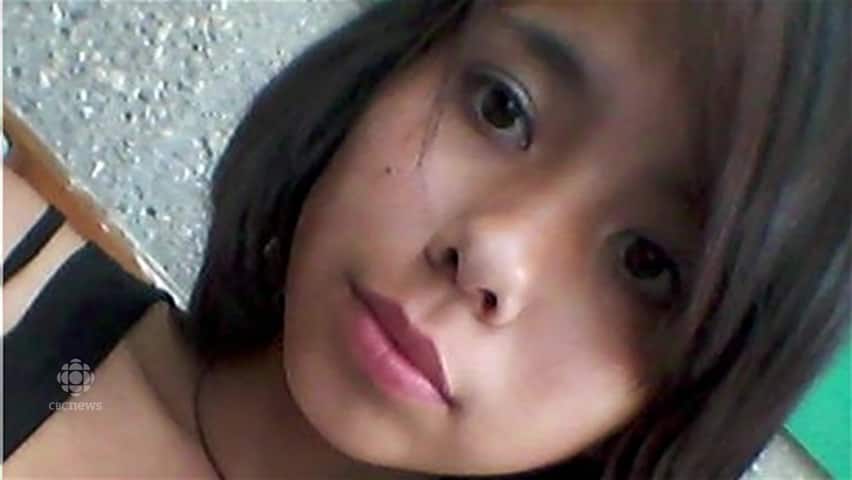 Tina Fontaine's body had no obvious injuries and cause of death unknown, pathologist says

3 years agoVideo
1:17
Pathologist Dennis Rhee told the Court of Queen's Bench jury that the 15-year-old was wearing a skirt, shirt and running shoes when she was found wrapped in a duvet, which was filled with rocks. But because her body was so decomposed, Rhee, who performed the autopsy on the teenager's body, said he couldn't find a cause of death. 1:17

A toxicologist who testified on Tuesday said there were no signs the drug was in Fontaine's body when she died, but gabapentin wouldn't be picked up by tests done at the RCMP lab where he works. It would have to be present in high and "potentially toxic" levels in order to be detected.

Court previously heard that on Aug. 8, 2014, Fontaine had gone to the Health Sciences Centre and told a nurse she had taken gabapentin, also known as gabby.

Questioning Tuesday by defence lawyer Andrew Synyshyn suggested it would be argued the drug was connected to Fontaine's death.

But on Wednesday, Rhee said he ruled out drug toxins or poisons as the cause of death.

Kavanagh: “the end of the day you don’t know how Ms. Fontaine died.” Rhee: “That is correct”. Rhee said there was no sign of severe intoxication that could indicate the teen smothered herself. He also didn’t find any food in her airway to suggest she choked on her own vomit.

He said the autopsy indicated the death was suspicious and likely not suicide because she "came wrapped up in bedding material."

"There were rocks inside."

During cross-examination, defence attorney Anthony Kavanagh pointed to notes on the autopsy report by Rhee that said Fontaine admitted to consuming alcohol, marijuana and gabapentin.

He asked about aspiration or whether someone could die because of taking the drugs.

"At the end of the day, you don't know how Ms. Fontaine died," Kavanagh said to Rhee.

"No," the pathologist responded.

Testimony from the RCMP lab that tested fibres and a DNA expert is expected as the trial continues on Thursday.

With files from Caroline Barghout