All but one of the city's QuickCare clinics will close as the Winnipeg Regional Health Authority makes provincially mandated budget cuts.

Access centres will extend hours, taking on staff and resources of QuickCare clinics

All but one of the city's QuickCare clinics will close as the Winnipeg Regional Health Authority makes provincially mandated budget cuts.

At the same time, the health authority will extend clinic hours at the city's Access centres to accommodate patients who can't wait for an appointment with their family doctor.

The QuickCare clinics on Vermillion Road, Portage Avenue, Jefferson Avenue and Dakota Street will close, and their services will be redirected to other primary care options in the surrounding areas by the end of January 2018, the health authority announced Tuesday.

Staff and resources will be moved to existing Access centres, the announcement said.

"We have a responsibility as leaders in health care to become more efficient and at least maintain the quality and safety of what we do. We have to make tough decisions," said interim WRHA president Réal Cloutier.

QuickCare clinics are staffed with registered nurses and nurse practitioners to diagnose and treat minor health issues when most other clinics are closed. Access centres provide primary care and family services, along with a variety of social services.

The QuickCare Clinic on McGregor Street will stay open to address the needs of vulnerable members of the community, health authority officials said.

Cloutier said the QuickCare clinics were "well-utilized," but after examining the use of its rented space, the health authority decided it could make better use of its real estate by incorporating QuickCare staff into existing clinics and Access centres, and through partnerships with family physicians.

"So it basically means we can change our hours, we can better utilize our facilities. So from our perspective, we're trying to use our infrastructure differently and that is about driving efficiency."

The health authority will sublet the QuickCare clinic spaces.

The closures are expected to save the Winnipeg Regional Health Authority $900,000. The cuts come as the health authority works to cut $83 million in an effort to balance its budget for the 2017-18 year.

The health authority also said it is adjusting patient-to-staff ratios and changing staffing rotations at various units across the region.

The WRHA is also increasing fees for a number of services for seniors.

The daily fee for the adult day program, which provides seniors with social opportunities, will double from $8.85 to $17.70.

Optional transportation fees for geriatric day hospital will cost $15, up from $10.

"Accommodations will be made using an existing income-assessment tool for patients challenged by fee increases," the WRHA said in a news release.

The health region will also shift many services provided by the Mature Women's Centre at Victoria Hospital to general obstetricians and gynecologists by Oct. 1. Patients needing specialized care will be treated at Health Sciences Centre.

Adult out-patient physiotherapy and occupational therapy will be moved out of hospitals and transferred to private providers by mid-October. The province said people needing specialized rehabilitation services and people who cannot afford private insurance will be treated at HSC.

Primary-care services at the clinic at 1001 Corydon Ave. will be transferred to Access Fort Garry.

Cloutier said the WRHA has met with the health-care unions to give them notice about the closures.

The president of the Manitoba Government and General Employees' Union was quick to condemn the changes.

"Reducing staffing levels, closing QuickCare clinics and jacking up fees hurts families and doesn't improve patient care. As well, implementing so many changes in health care, all at once, is risky and confusing to both patients and staff," said Michelle Gawronsky in a statement released to media. 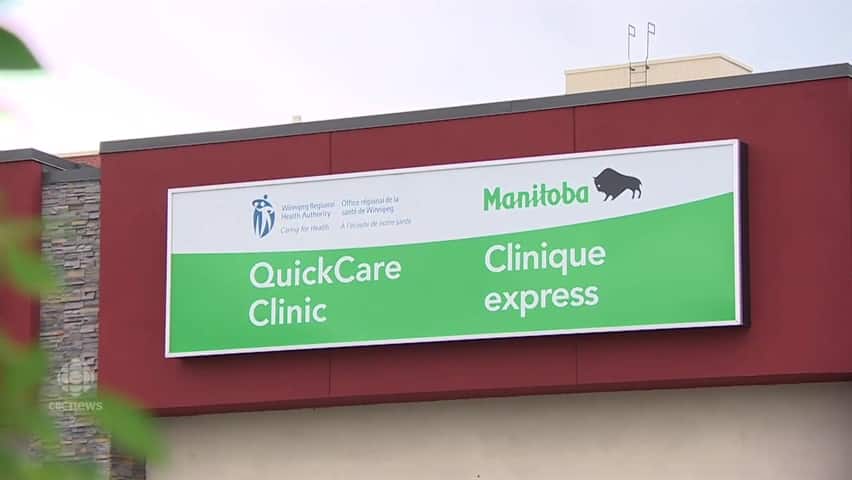 4 years ago
2:15
All but one of the city's QuickCare clinics will close as the Winnipeg Regional Health Authority makes provincially mandated budget cuts. 2:15

"Brian Pallister's promise to protect front-line health services is in tatters because of his uncompromising austerity plan," he said in a news release.

"This is the ugly face of austerity in Brian Pallister's Manitoba," added Fort Garry-Riverview NDP MLA James Allum in an interview with CBC Radio's Up to Speed.

He said in 2016, over 30,000 people used QuickCare clinics and getting rid of them isn't worth the financial savings.

"At this point, we can safely say that health care in Manitoba is in distress," Boissonneault said. "This government is going too far, too fast, and someone is going to get hurt."

The NDP introduced QuickCare clinics in 2012 and touted them as a cost-effective alternative to crowded emergency rooms.

Cloutier denied that the WRHA is pulling back from community health care, arguing the health authority has invested more in the community now than in the past. He pointed to investments in home care, primary-care clinics and Access centres.

He also pointed to the development of My Health Teams, made up of doctors, nurse practitioners, physiotherapists and other specialists that help co-ordinate health services in a specific geographic area or community.

Health Minister Kelvin Goertzen released a statement arguing the changes are necessary to make sure the province's health system is sustainable.

"Manitoba has spent more per capita on health care than nearly every other province, yet wait times for emergency health care, diagnostic testing and necessary surgeries consistently rank worst in the country," Goertzen's statement said.

"While any change can be difficult, no one with experience in our health-care system will argue that change is not necessary."

with files from Up to Speed