How do you respond to a mental health emergency? New course teaches psychological first aid

Christian Clavelle, president of Canadian First-Aid Training, helped launch a psychological first aid program that teaches people how to respond in a mental health crisis, and how to take care of themselves in order to be there for others.

Many Manitobans struggle with mental health over the holidays, but Christian Clavelle hopes the new Red Cross program he helped develop will prepare people to deal with a crisis.

The dark side of the season hits close to home for Clavelle, who lost his two siblings in the past three years. One of his sisters died by suicide in 2015. An overdose took the life of his other sister last year.

"I went through every conceivable stage of trauma, guilt … But where I'm at now, I'm in a good space," Clavelle said, though he still feels some days are tougher than others.

Clavelle works to honour his sisters through his dedication to a new psychological first aid training program approved by the Red Cross.

As president of the Canadian First-Aid Training Ltd. based in Winnipeg, Clavelle joined Don Marentette, the director of first-aid programs with the Red Cross and the driving force behind creating the mental health program, which launched this fall in Manitoba.

The first batch of new educators completed the initial instructors course in the province on Wednesday.

What is psychological first aid?

Course participants will learn about the Red Cross's "look, listen, link, live" model, which aims to build resilience through teaching about how help people cope with various types of stress.

The course, which is open to anyone from school counsellors to volunteers, "equips learners in developing a personal understanding of the effects of stress, loss, trauma and grief on others, with emphasis on self-care and personal protection," according to the online course description.

For those who want training but cannot afford the $177.45 price tag, the Red Cross offers other courses related to psychological first aid, which can be found online.

"If you're there for somebody, and they're in crisis, it's invariably going to impact you. It's going to affect you," Clavelle said.

Being there for somebody who's in a crisis requires some things from you.- Christian Clavelle

Friday was the anniversary of the death of one of his sisters, which hits hard for Clavelle, but also gives him the strength to spread the support.

"Being there for somebody who's in a crisis requires some things from you," Clavelle said. It's not about giving advice or trying to diagnose, he added. "It's making yourself available and listening."

He emphasized the course does not replace counselling, medication or fact-finding, but learners will gain an idea of self-care and how to aid vulnerable people dealing with trauma.

Trauma is the long-lasting, deep-rooted response that often results from living through a distressing event. It can trigger physical ramifications in addition to intense issues related to emotional, mental and social well-being.

"Experiencing a traumatic event can harm a person's sense of safety, sense of self, and ability to regulate emotions and navigate relationships," the Centre for Addiction and Mental Health says on its website.

Susan Chief, the North End co-ordinator of the Bear Clan Patrol, took the course with other Bear Clan members earlier in December to bolster their ability to bring compassion and care to the inner-city community.

She deals with vulnerable youth living in difficult situations — primarily young females in high-stress mode or the throes of suicide crisis — who are "crying for help" on a daily basis.

"I used to be in their situation … I used to be one of these people that I work with," Chief said. Growing up, she was swept up by the streets, the sex trade and drugs.

The mental health first aid training "didn't seem like a classroom environment like most [certifiable training sessions] are. It was very relaxing and fun," Chief said. "It's an eyeopener, definitely, for a lot of people."

Some people stress about gifts and material things that are out of their control, particularly around this time of year, which can add to the burden, Chief suggested.

"That's all money. That's just an item. That stuff is eventually replaceable," Chief reminds them.

The community organizer hopes to help people focus on coping, staying healthy and helping others.

"If I could help change one person, that would mean the world to me," Chief said. "It's worth more than money can buy." 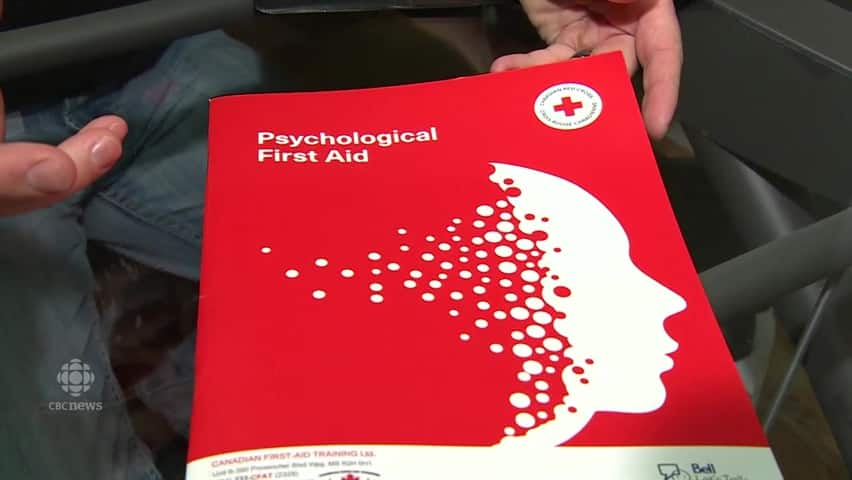