The provincial government has announced two new measures to mitigate flood dangers in the province and usher water out of Lake Manitoba more quickly. 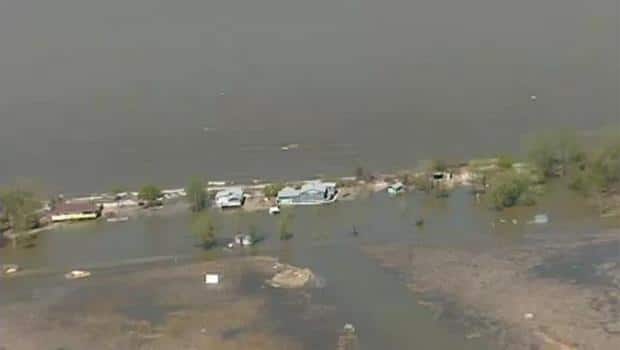 The provincial government has announced two new measures to mitigate flood dangers in the province and usher water out of Lake Manitoba more quickly.

On Wednesday, officials announced they planned to spend $250 million on making an emergency flood channel that runs from Lake St. Martin permanent and creating a new outlet for Lake Manitoba.

Lake St. Martin was inundated with flood waters in 2011, forcing thousands of evacuees from the community, located about 280 kilometres north of Winnipeg.

During the spring and into the summer of 2011, the province struggled to contain the swollen Assiniboine River by operating the Portage Diversion well over its capacity.

The 29-kilometre channel starts at an inlet near Portage la Prairie and moves water from the river into Lake Manitoba.

The amount of water it fed into Lake Manitoba caused a surge in the lake's levels and resulted in considerable damage when spring storms whipped up waves that slammed into homes and cottages in many communities and flooded farmland that is still trying to recover.

In August 2011, the province spent $100 million to carve out a 6½-kilometre-long channel to bring down the levels on Lake Manitoba and Lake St. Martin.

The channel, which opened in November 2011, redirected water from Lake St. Martin to Big Buffalo Lake, where it flowed naturally into the Dauphin River and eventually into Lake Winnipeg, but the channel is currently only temporary, so officials can’t operate it at all times.

In the fall of 2012, the channel was closed, and it remains closed today.

Under new provisions, the channel could be opened and closed at the province’s discretion.

Before they can make the channel permanent, an environmental assessment and infrastructure changes will need to take place.

Officials said they hope the channel will help control water levels on both Lake St. Martin and Lake Manitoba.

The nearby Lake St. Martin First Nation recently met a major milestone in securing new land for their community.

Provincial officials estimated making the channel permanent would take about eight years, and once it was completed a new outlet for Lake Manitoba would be created.