A Winnipeg woman who paid thousands of dollars for a prearranged funeral has learned the company she signed with is no longer in business, and she doesn’t know how to get her money back.

‘We have no idea where this money has gone,' says daughter of woman who prepaid more than $4K for funeral

A Winnipeg woman who paid thousands of dollars for a prearranged funeral has learned the company she signed with is no longer in business, and she doesn't know how to get her money back.

"I thought to myself, gosh, if I've got to pay for my funeral all over again, it's a lot of money," said Rosemarie Markewich.

"We trust these people and they make the arrangements," said her daughter, Maggie Berthelette, "and now we find out that the money's gone and there's no arrangements."

Markewich paid Knysh Funeral Chapel $3,500 in 2009 for a prearranged funeral.

"My husband's funeral was there. We had been friends with Knyshes for over 50 years," said Markewich. 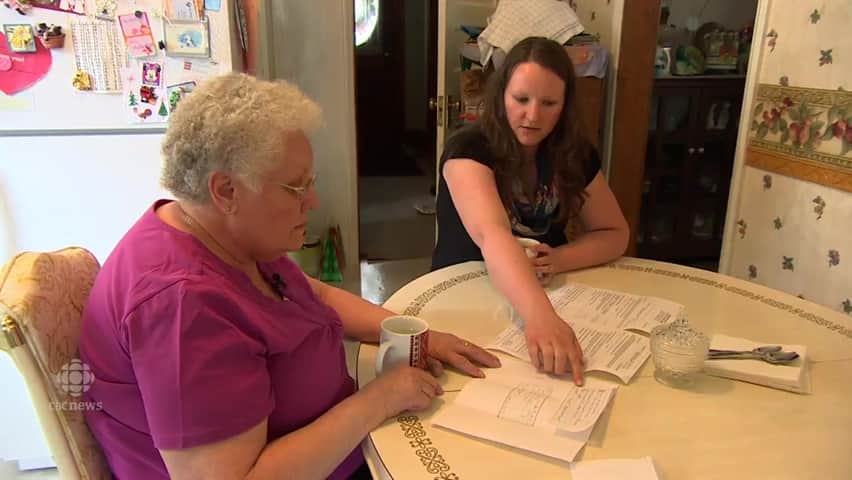 Prearranged funeral money in limbo after company goes out of business

4 years agoVideo
3:53
A Winnipeg woman who paid thousands of dollars for a prearranged funeral has learned the company she signed with is no longer in business, and she doesn't know how to get her money back. 3:53

At the time, she had no idea that four months earlier — in March of that year — a lawyer had filed a letter with the Manitoba Companies Office saying the numbered company was "no longer carrying on business in the province of Manitoba."

The letter asked the companies registry to "place this corporation on the next cancellation list."

In 2016, Markewich contacted Knysh to add some services to her prearranged funeral and paid another $550, making her total payment $4,050.

Soon after that, Markewich started to question what was going on.

"A friend of mine kind of said to me, 'You know, I have my funeral arrangements with Knyshes too, and it seems that they're out of business,'" Markewich said.

Under Manitoba's Prearranged Funeral Services Act, money paid for a prearranged funeral must be kept in a trust fund until it is needed.

The law also says anyone selling prearranged funeral plans needs a licence from the Public Utilities Board. The PUB told CBC News that Knysh Funeral Chapel's licence for prearranged funeral services had expired in 2004 — five years before Markewich signed her agreement.

"I'm reluctant to comment on the specifics of an open investigation," said Darren Christle, the PUB's secretary and executive director. "I am aware of this particular complaint.

"Your heart goes out to them and you want to help," Christle said.

He said an important point to resolving the case is that Markewich was able to provide the receipts for her purchase.

The trust accounts of all licensed funeral homes are audited by the PUB annually, Christle said, but if the company selling the prearranged funeral isn't licensed, it won't be scrutinized.

"The first thing we would always recommend to the public is, if you're considering buying a prepaid funeral service, is to go to the Public Utilities Board website, and make sure that the funeral home or funeral director has been issued a current licence," he said. "And that's on our website."

Some 12,000 Manitobans have purchased prearranged funerals from licensed operators, worth more than $43 million held in trust accounts as of March 2016, according to the PUB.

Markewich said when she signed her agreement with Knysh Funeral Chapel in 2009 she dealt with Nick Knysh. He currently works at a different funeral home in Winnipeg, Eternal Grace Funerals.

"My brother owned that other company and I just worked for him," Knysh told CBC News. "I never owned the company."

Companies office documents show at different points over the years, Nick Knysh was a director and shareholder of 3684009 Manitoba Ltd.

He said he did recall writing up Markewich's agreement years earlier. But he said his brother, Mike Knysh, was in charge of what happened afterwards.

"I'm being honest with you. Like, I worked for him, he owned the company. He'd be the person to talk to."

Nick Knysh said he has not spoken with his brother in years and was unaware of where he is working now.

Mike Knysh relocated to Alberta and is currently a licensed funeral director at Connelly-McKinley Funeral Home in Edmonton.

Reached at his workplace in Alberta on May 23, Mike Knysh said he too remembered Rose Markewich.

When asked what had happened to the money Markewich paid for her prearranged funeral, he said, "I'd have to look into that."

Asked why companies office records would have shown the numbered company operating as Knysh Funeral Chapel was dissolved months before Markewich signed her agreement, Mike Knysh said, "No, the company was still registered, so I'm not sure what the oversight was there.

"That's odd, but you know, we'd have to get our lawyer to look into it because I know we were still operating at that time," said Mike Knysh.

CBC has not had a further reply from Mike Knysh, despite repeated requests over the last week.

Markewich said when she decided to add more services to her prearranged funeral, it was Mike Knysh who came to her home in April 2016 to collect the additional money.

When Markewich signed her agreement, it was at Knysh Funeral Chapel in Winnipeg. Subsequently, the company operated in Beausejour, Man. — about 50 kilometres northeast of Winnipeg — but the Beausejour location was destroyed by fire in 2013.

Markewich and Berthelette said the PUB advised them to file a complaint with Winnipeg police, which they did.

A spokesperson for the Winnipeg Police Service confirmed investigators are working on it.

Markewich said Mike Knysh told her earlier this year that Korban Funeral Chapel in Winnipeg would take care of her arrangements and that her money would be transferred to Korban for that purpose.

As for where the money went after Markewich purchased the plan in 2009, "Your guess is as good as mine," she said.

"We have no idea where this money has gone. It was supposed to be held in trust to be used at the time of the funeral," said Berthelette.

At the PUB, Christle said Markewich's is the only complaint he's received about Knysh Funeral Chapel.

But Markewich and Berthelette fear others might be in the same situation and not yet realize it.

"I hope that anybody [who] hears about this goes and checks their papers and makes sure everything is in order," Markewich said.

"Check them out real good, and don't get in a mess like I was."