A peregrine falcon by the name of Porter was found dead in downtown Winnipeg on Tuesday, just blocks from the hotel where he was born in a rooftop ledge nesting box in 2017.

A peregrine falcon by the name of Porter was found dead in downtown Winnipeg on Tuesday, just blocks from the hotel where he was born in a rooftop ledge nesting box in 2017.

Mark Olson was driving near a parkade on Donald Street  when he saw the peregrine lying in the middle of the road.

Peregrine falcons, which are about the size of a crow and can dive while hunting at speeds of up to 290 km/hr, are among the fastest birds in the world. They are also a valued and endangered species in Manitoba.

"I got out of the car, sort of ran out into traffic. I picked the bird up and he was clearly dead and he had two bands [on his legs] and I put him in my truck," said Olson, who posted a close-up photo of the bird's feet and bands to Facebook.

Within minutes of Olson's post, friends connected him with merlin expert Justine Josephson-Laidlaw, who in turn put him in touch with Manitoba's Peregrine Falcon Recovery Project, a three-member volunteer team dedicated to tracking and preserving the province's peregrines.

"When I saw the picture, D over 52, the band sounded familiar but I just couldn't place a name to it," said Dennis Swayze,  a Manitoba Peregrine Recovery Project member and wildlife photographer who met Olson on Tuesday to retrieve the bird.

Knowing the black lettering and format was unique to Manitoba, he checked the digits in his database.

"There it is. I knew exactly who it was," he said.

The peregrine was Porter, a male born to parents Pip and Princess, alongside two female siblings atop the Radisson.

Since then it has banded about 300, she said.  Members of the group also set up the nesting box on the Radisson's 30th floor.

Porter was seen briefly in 2018 but not again until now, Maconachie said. Both of his sisters migrated, as prairie peregrines do, to Texas or Mexico, but never returned. Maconachie believes Porter's death was accidental — either a hunting accident (peregrines take their prey, namely pigeons and ducks, out of mid-air) or a territorial dispute.

"There are tall buildings there. It's very easy to misjudge hunting for something to eat. He could've been trying to avoid the resident pair," she said.

"This is only a block away from the Radisson Hotel and even though it's his dad who is the male at the Radisson Hotel [right now], dad doesn't really care. You're in his territory, he has eggs to protect right now. You need to get out of the territory."

Porter did not have a mate, had no eggs of his own and wasn't guarding any territory — factors the group looks at when investigating the deaths of peregrines. So the overall impact on the population will be low, said Maconachie.

But he had potential, she added. 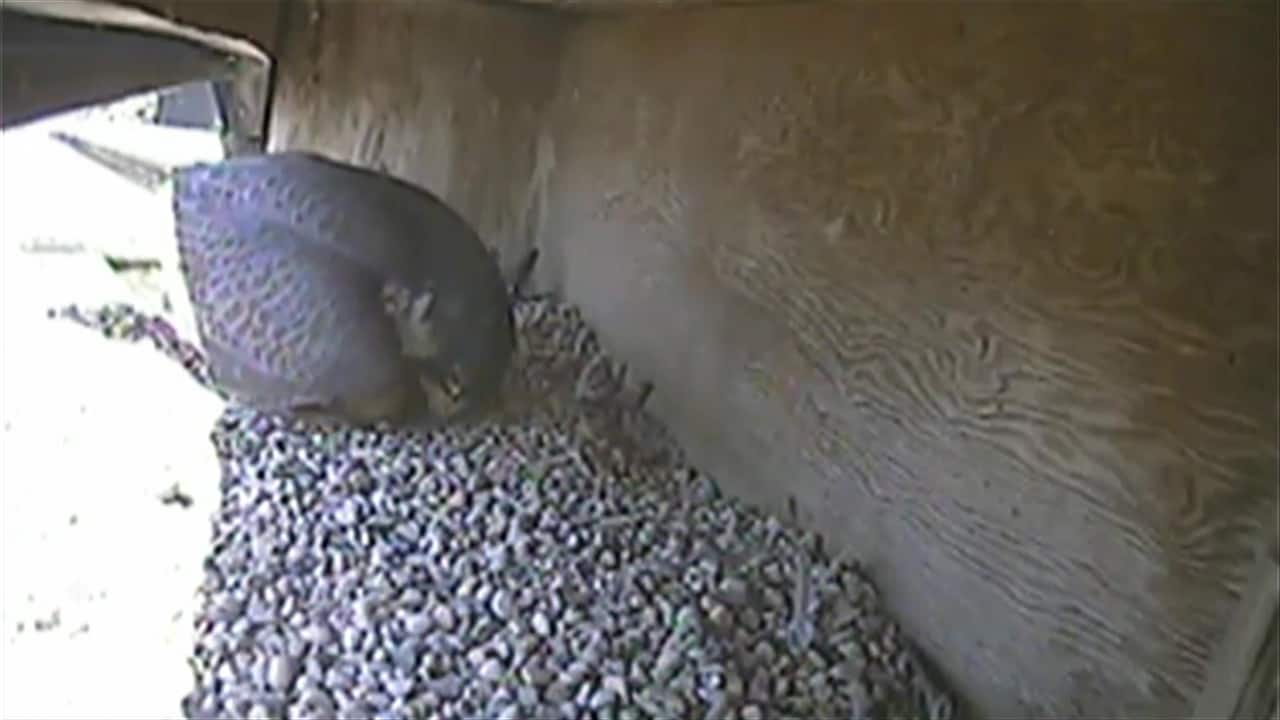 "It's unfortunate because he was the right age. He's only three so this was a good time for him to start nesting and would've been a good continuation of the genetic line and of the family."

The Radisson peregrines are the only nesting pair the group is aware of, so far, in Winnipeg, and the annual falcon cam will go live closer to when the eggs hatch.

There are only two other known pairs in the province right now. One pair has returned to nest in Brandon and a new  pair have staked out a building outside of Winnipeg, said Maconachie.

But she's not saying where.

"It's a little bit like when you're pregnant — you don't tell anyone in the first trimester. Then you're not contributing to any problems they're going to have," she said.

A couple of years ago, her group knew of nine nesting pairs in the province. That number dropped by a few last year.

There's still time, as birds are still returning from migration, she said, and she's hoping this year brings five. It's difficult to predict the total number of peregrine falcons in the province, as many are perennial, making their way north to nest in the tundra or coming in unbanded from the United States.

But the best measure of the population's health is how the fledglings do, she said.

Peregrines were nearly wiped out completely in North America in the mid-1970s, and their reintroduction to Manitoba was led by the Manitoba Peregrine Falcon Project with the release of each captivated fledgling. Eventually, some started returning to Winnipeg after migration each year.

"It's a long way from here to Mexico and birds die every year, I'm afraid," said Maconachie, who has been personally involved in the effort since the early 1990s.

"The ones that we do know about, we do like to make sure that we don't leave them out there. We don't just want them tossed in the trash bin."

Her group will investigate and record Porter's cause of death before turning him over to the province, to whom he belongs because of his endangered status. He might eventually be used in a museum or for research, she said.

She encourages people to take photos of the peregrines and get in touch or support them so that they can keep monitoring them, though she says it's best not to distribute photos of live birds on social media, as that draws crowds that disrupt them.

Both she and Swayze say they're thankful for people like Olson, who not only watch out for these beautiful birds, but understand that their existence is still precarious.

"We're always very glad when people are able to contact us and say, 'We think we have a peregrine,'" said Maconachie.

We're always happy to come out and look, and if it is, we're very grateful to be able to get them back and close the circle."

WATCH | The re-establishment of peregrine falcons in Canada: 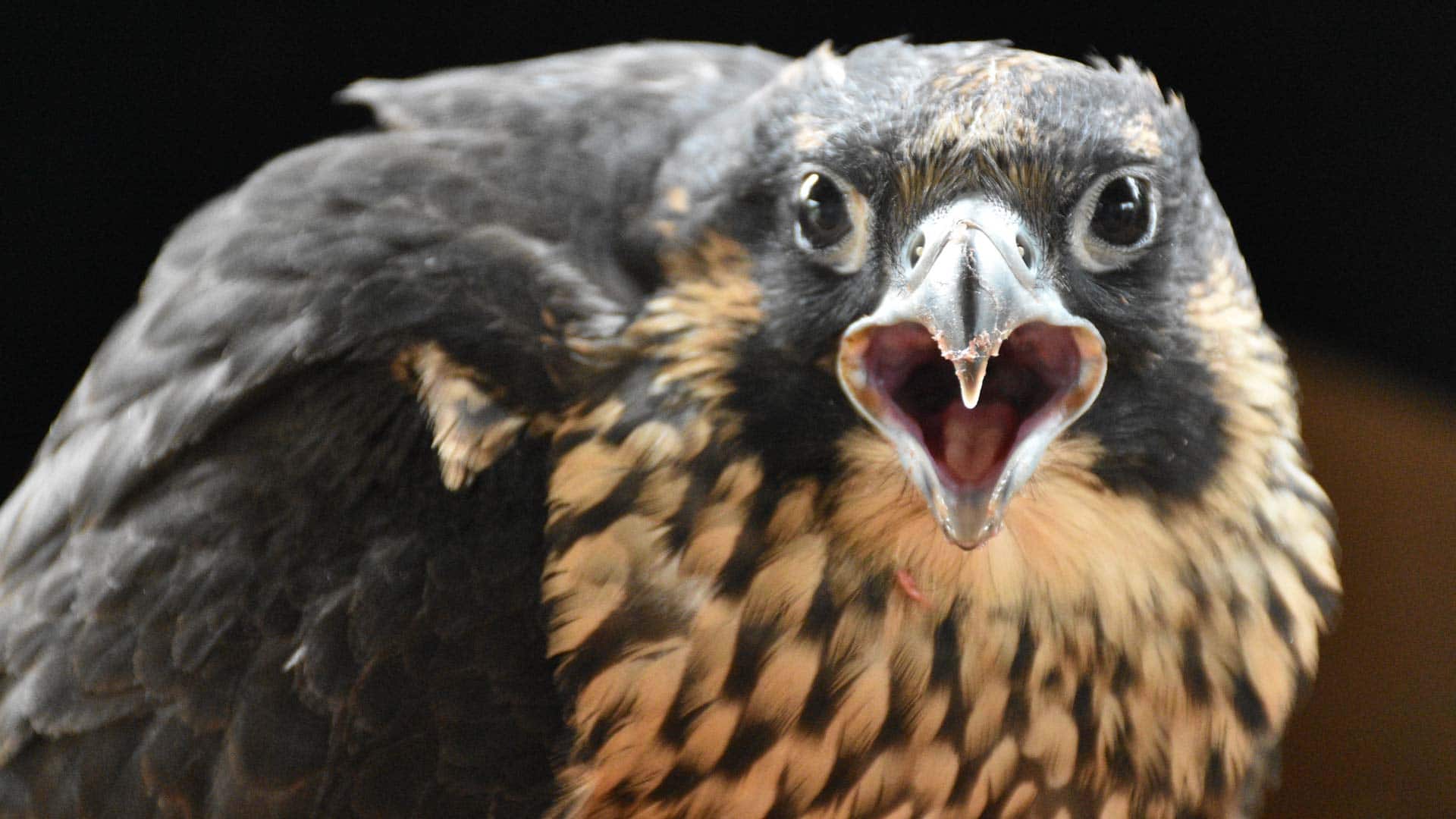 Canada's falcon population back from brink of extinction

2 years agoVideo
2:30
The peregrine falcon was once on the brink of extinction. Now, the bird is actually making a comeback thanks in large part to one Alberta man who not only helped the species recover, but has bred an industry in the process. 2:30
CBC's Journalistic Standards and Practices|About CBC News