Eleven days after city council approved a plebiscite on reopening Portage and Main this fall, a group has formed to convince Winnipeggers of the benefits of voting yes.

'We want to move beyond the discussions of traffic and cost,' spokesperson Brent Bellamy says

Eleven days after city council approved a plebiscite on reopening Portage and Main this fall, a group has formed to convince Winnipeggers of the benefits of voting yes.

The Downtown Winnipeg Business Improvement Zone, a handful of marketing firms, several Winnipeg creative professionals and political workers are working on a yes campaign, hoping to counter financial and traffic arguments against reopening the downtown Winnipeg intersection to pedestrians.

"We want to move beyond the discussions of traffic and cost, to talk about the opportunities of what happens when you bring people back to the centre of your city," said architect and CentreVenture board chair Brent Bellamy, a spokesperson for the Portage and Main yes side.

"What are the economic development opportunities? What are the safety repercussions of that?"

​On July 19, city council voted in favour of adding a non-binding Portage and Main referendum question to the municipal election ballot on Oct. 24.

Mayor Brian Bowman, who vowed to reopen the intersection to pedestrians during the 2014 election campaign, voted in favour of the plebiscite, which he has pledged to respect even though council is not compelled to heed the result.

Bowman said Monday he does not see his support for the referendum as a means of walking back his 2014 campaign pledge. The mayor said he recognizes the issue is divisive among Winnipeggers.

Bellamy, who was appointed to the CentreVenture board by Bowman, said the mayor played no role in convincing him to take up the cause. CentreVenture is an arm's-length city agency intended to provide leadership in downtown Winnipeg planning and development.

"The mayor is campaigning for all kinds of things for the city, as all candidates are. My focus is specifically on this one issue," said Bellamy, acknowledging the task ahead of him is considerable.

Bellamy said other members of the yes side include Ryan Palmquist, who works as executive assistant to St. Boniface Coun. Matt Allard, and marketing firm owner Adam Dooley.

There does not appear to be an organized no side. North Kildonan Coun. Jeff Browaty and South Winnipeg-St. Norbert Coun. Janice Lukes, who authored the council motion for the referendum, said they are not actively engaged in campaigning for the no side.

There are no rules governing how much money a yes or no side can raise or spend on the Portage and Main plebiscite.

Third-party advertising is allowed on any issue, provided the messaging does not mention any specific candidate, senior election official Marc Lemoine said.

"Materials would have to be strictly about the issue and not about a candidate," Lemoine said in a statement.​

The Portage Avenue and Main Street intersection was closed to pedestrians in 1979, with concrete barriers going up to funnel people into an underground tunnel to get across the intersection. 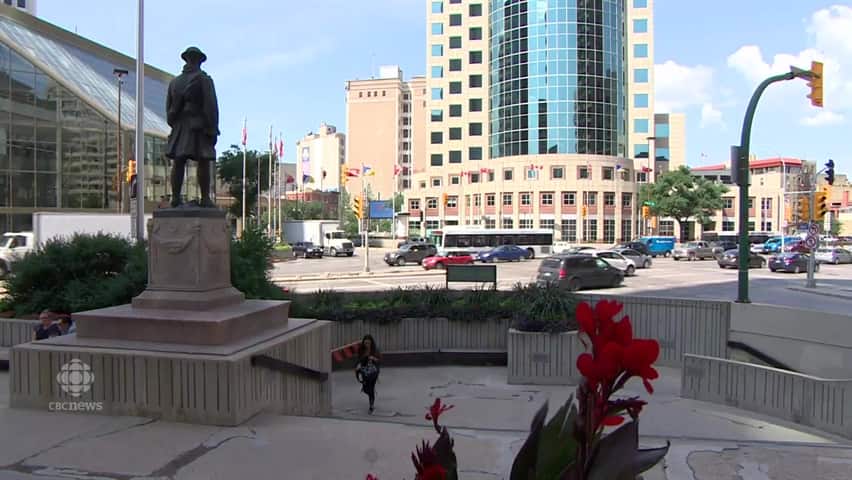 2 years ago
1:57
City council approved a plebiscite on reopening Portage and Main this fall, a group has formed to convince Winnipeggers of the benefits of voting yes. 1:57
CBC's Journalistic Standards and Practices|About CBC News