Council approves a $3.5M plan to improve intersection and prepare for 2019 reopening

The Amalgamated Transit Union, which has already expressed opposition to reopening the intersection on the grounds buses might strike pedestrians in turning lanes, now says changes to the central intersection also pose a safety risk to transit operators.

A city-commissioned traffic study concluded Winnipeg Transit travel times will increase if the intersection is amended to allow pedestrians to cross above ground.

Callahan made his comments at city hall before city council considered a plan to spend $3.5 million to make improvements to Portage and Main and plan for a reopening that could take place as soon as 2019.

The plan, approved Wednesday afternoon in a 10-5 vote, calls for the city to redirect $2 million in road repair funds to the project and use $1.5 million worth of other existing budget lines to pay for a three-pronged Portage and Main plan:

Browaty raised concerns about traffic snarls, Eadie said no one lives near Portage and Main and Lukes complained of a lack of consultation.

On Wednesday morning, about 20 members of the transit union and other labour unions protested the reopening outside city hall. Callahan said transit workers are frustrated by the slow progress on safety improvements, flat funding from the province for transit and the potential for transit cuts in 2018.

Inside city hall, Winnipeg Chamber of Commerce chair Johanna Hurme appeared before council to support reopening the intersection. So did Rosanne Hill Blaisdell, vice-president of Harvard Developments, which owns the 201 Portage office tower at the northwest corner of Portage and Main.

Hill Blaisdell said it's important for the city to invest in Portage and Main when neighbouring property owners such as her company are investing millions in their properties.

Harvard is spending millions on its underground concourse, plans are in place for Richardson plaza improvements on the northeast corner of Portage and Main and at the southwest corner, Artis intends to build a new tower on the south pad of Winnipeg Square. 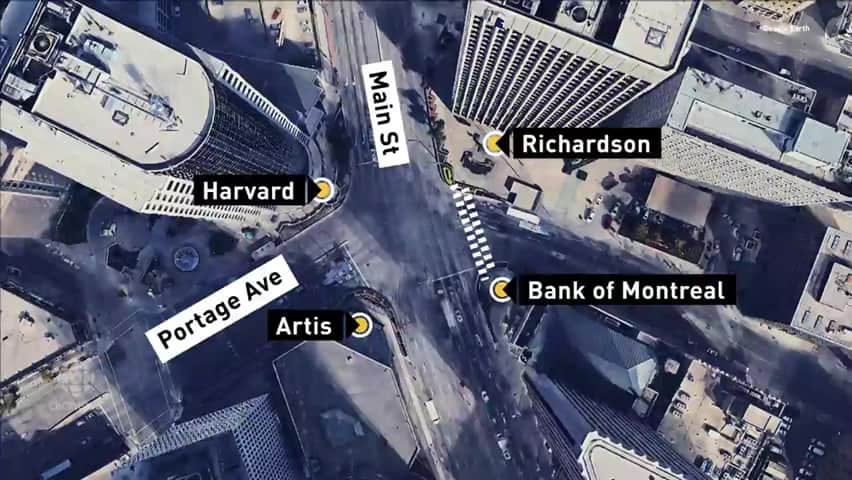 3 years agoVideo
2:11
The Amalgamated Transit Union, which has already expressed opposition to reopening the intersection on the grounds buses might strike pedestrians in turning lanes, now says changes to the central intersection also pose a safety risk to transit operators. 2:11