Canadians are more likely to blame cyclists for conflict with drivers on the road, but not in Winnipeg, according to a new Angus Reid poll.

Results show broad approval for separate bike lanes, belief the city doesn't have enough of them

Canadians are more likely to blame cyclists for conflict with drivers on the road, but not in Winnipeg.

A new Angus Reid Institute poll shows Winnipeg is the only Canadian city where the majority of people feel that drivers carry more of the blame when it comes to bad interactions between the two groups.

"Usually in cities where we see more drivers — and that's cities across the country — we're more likely to see drivers inclined to say, 'Well, it's not our fault," said Shachi Kurl, executive director of the Angus Reid Institute.

Nearly two-thirds of the 526 Winnipeggers surveyed said there was "quite a bit of conflict" between drivers and cyclist, and 52 per cent lay the blame with those on four wheels, not two.

The numbers aren't surprising to either side, it seems.

"I think we have a lot more impatient drivers," said 56-year-old Doug Foster, a longtime car and truck driver. He says the only time he's on two wheels is when he rides his motorcycle.

"It's tit for tat — I mean, basically a lot of people don't pay attention. That goes for cyclists and drivers," he said.

Brenda Saunders has been using her bike as her main mode of transportation for 20 years. She says drivers are usually in the wrong.

"I'd say more drivers for sure, and I mean it could go both ways as well, 'cause I've seen some cyclists making bad names for us, but I also agree that drivers, they just don't like cyclists," said Saunders.

She's been on the receiving end of a driver's rage more than once.

"I've been yelled at by a motorcyclist, he threatened to push me over, and also with a couple cars as well," she said.

Another area of the poll that sets Winnipeg apart from other cities is a desire for more separated bike lanes.

In Western Canadian cities, Kurl says there is generally a perception that there are either too many or the right number of bike lanes. The exception is Winnipeg.

Two-thirds of those polled here say there are too few bike lanes, and 76 per cent said separated bike lanes are a good thing, which was higher than the average of 65 per cent Canada-wide.

"I've biked in cities all across Canada that have had protected bike lanes, and it is a game changer," she said.

"And until we see more protected bike lanes, we're not going to see anywhere near the volume of cyclists that we could have." 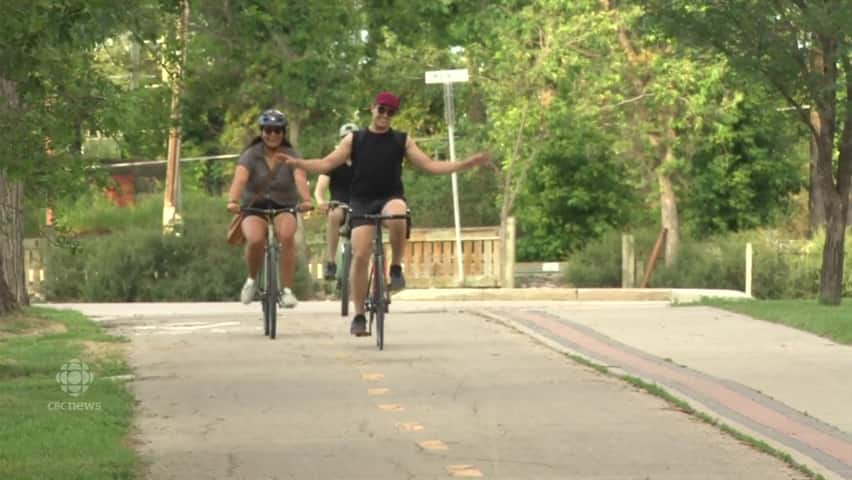 2 years agoVideo
2:03
Canadians are more likely to blame cyclists for conflict with drivers on the road, but not in Winnipeg, according to a new Angus Reid poll. 2:03

Kurl says the way we use our roads is changing, probably for the first time since the first automobiles began to share the road with horses and buggies.

"Cities in this country are undergoing as profound a change, in terms of how different modes of transportation share the road, as we've seen in a hundred years," said Kurl.

"Bikes are not newfangled, but the emphasis from city planners ... to consciously encourage more bicycle traffic on the road is a reasonably new thing. It requires a shift in mindset that I think will be generational."

Bike and cars can co-exist?

Bike Winnipeg executive director Mark Cohoe is not surprised by the perceptions of conflict on Winnipeg streets.

He says regardless of who's to blame, the conflict arises when those using the road feel like they have to fight for the same space.

"In some ways [the poll results are the same as] what we see from results from collision [reports] as well, it comes out 50-50 when people look at it and who is at fault," he said.

"It you're on a bike it's certainly a different situation from driving a vehicle, you're not taking that lane," he said.

"But [cyclists] do want to get to our spaces and I think people maybe perhaps aren't educated on both sides as well as they could be as to how to interact with each other, how to make sure we're communicating and cooperating," said Cohoe.

He says giving cyclists a dedicated space could help smooth the relationship.

"A lot of people out there … they want to get biking more but they're afraid of mixing with traffic, so in that sense, it's not that surprising that people want to see that protected infrastructure come in," said Cohoe.

He said having bike lanes designed in a way that intuitively tells drivers and cyclists what part of the road is theirs, like coloured paint or raised curbs, helps encourage them to share the road without problems.

Cohoe says he's encouraged by the results of the survey and thinks it shows both sides want to see improvements.

With files from Danielle Nerman and Bartley Kives