A Winnipeg writer and illustrator is reminding Canadians that the four people who want to lead our country were once curious children with big imaginations, with a new comic called Politikids.

We were all kids once — even Canada's political leaders.

A Winnipeg writer and illustrator is reminding Canadians that the four people who want to run our country were once curious children with big imaginations with a new comic called Politikids.

Kaj Hasselriis is the writer and illustrator of the comic book, which is aimed at young readers. It tells childhood stories from the lives of the major political parties' leaders — Green Party Leader Elizabeth May, NDP Leader Jagmeet Singh, Andrew Scheer of the Conservatives and Justin Trudeau of the Liberals  — in four stories over its 24 pages.

"I wanted to make Politikids for all the kids out there who, over the next six weeks, will be watching the news and listening to CBC Radio news, and they will be asking their parents and their teachers, 'Who are these people and what's their deal?'" he told CBC Radio's Ismaila Alfa on Up to Speed Friday.

Hasselriis is a former CBC Radio producer and reporter who has been involved in politics himself, running for Winnipeg mayor in 2006 and working on campaigns for other politicians. He read the leaders' memoirs and researched their histories to find key moments in their childhoods that motivated them to pursue a life in politics.

"I really wanted to zero in on the key moments for them that show the person they have eventually become, especially politically," he said.

For Green Leader Elizabeth May, for example, that involves looking at her childhood as an animal lover and budding environmentalist.

Politikids tells the story of how one Easter, she and her brother were given lambs. When the animals suddenly died, she investigated and found they had been exposed to harmful pesticides.

"That was Elizabeth May's call to action," Hasselriis said.

Jagmeet Singh grew up in Windsor, Ont., where Hasselriis​​​​​​'s book tells the story of how the future NDP leader was bullied for wearing a head covering and having immigrant parents.

"He was the kid who wanted to fight back and wanted to become stronger, so he went into taekwondo and wrestling," Hasselriis said.

His book looks at how Andrew Scheer's paper route inspired his future career as the Conservative Party leader.

Working a paper route while growing up in a middle-class family in a suburb in Ottawa, the young Scheer read headlines and started to have questions for his family about politics and democracy, Hasselriis says.

That's when his father told him, "if you want to change things, you have to stand up for things."

That started with the small stuff, Hasselriis says.

"One day in school, Andrew Scheer had that moment when the teacher wanted him to stop drinking pop," he said with a laugh.

In his look at future Liberal Leader Justin Trudeau, Hasselriis focuses on what it was like to grow up as the son of a prime minister.

"He had a bit of a big ego and had to get it tamped down a bit," Hasselriis said.

He tells the story of how that involved the young Trudeau learning to respect others and fight for human rights.

Politikids, which had its official launch last week, is available now through Hasselriis's website.

Canadians will get a chance to pick their own favourite "politikid" when they go to the polls on Oct. 21. 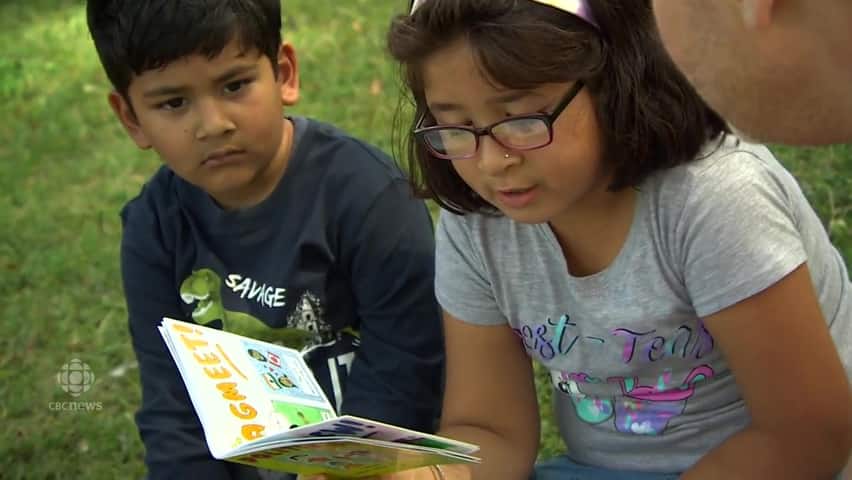 1 year ago
2:08
A Winnipeg writer and illustrator is reminding Canadians that the four people who want to run our country were once curious children with big imaginations with a new comic called Politikids. 2:08