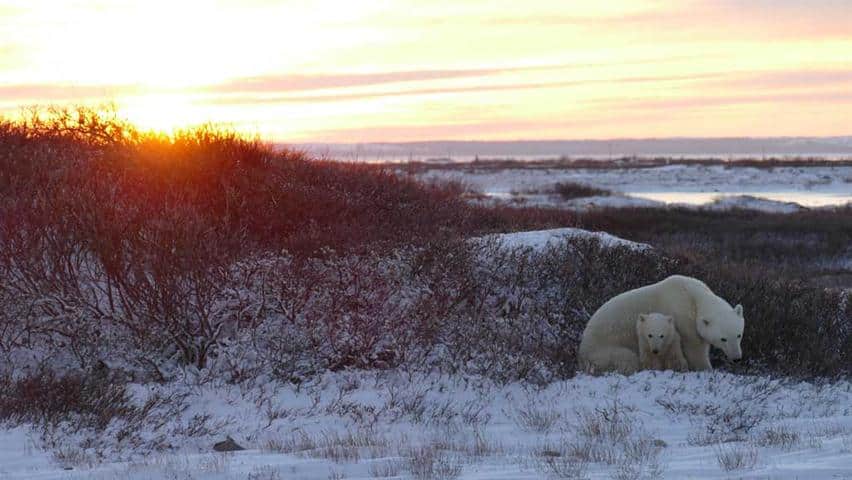 'These bears are worth more to me alive than dead'

As a biting wind whips off Hudson Bay, BJ Kirschhoffer is outside, in freezing temperatures, fiddling with the electronics inside an oddly shaped green orb.

"All we have to do is mount it and flip a switch," he says.

The orb is a Google Trekker camera. It's mounted to the roof a tundra buggy, a giant bus on permanent loan from one the local tour companies that brings tourists up close to the bears around Churchill, Man.

The Trekker is the same backpack-mounted camera Google puts on hikers and explorers to get a 360-degree view in remote locations for its Street View maps. Here it's being used to virtually capture images of bears in their habitat.

"We drive around and look for polar bears."

Along the western shore of Hudson Bay just east of Churchill there are plenty of bears, all waiting for Hudson Bay to freeze so they can get out onto the ice and hunt.

Kirschhoffer is part of a team of scientists with Polar Bears International using the Trekker and its imagery to draw attention to the issue of climate change in the region.

"A lot of people can't come here — it's expensive, it's remote," Kirschhoffer says.

"There is a series of cameras all the way around that orb that snap pictures every so often," explains Kirschhoffer as he hits 'start' on an app on his phone.

Those pictures get stitched together into interactive maps online, allowing people to get an appreciation for the landscape and its four-legged inhabitants.

But Kirschhoffer is hoping to do more than simply offer people a view of the tundra. Over time, he hopes the Trekker will be able to document changes in the landscape. His goal is not only to draw awareness to climate change, but also to provide scientists with a visual tool to go along with decades of climate data that show this region is warming.

On the sub-arctic plains around Churchill scientists have long been looking into the effects of climate change.

Studies have shown the surface temperature of Hudson Bay is rising. In some parts of the bay the ice is coming later and receding earlier, shortening the season where polar bears can go out and hunt on winter sea ice.

Scientists generally point to climate change, but there is debate about what exactly that warming is doing to polar bear movements and numbers.

For decades the primary way to track bears has been with radio collars that are both expensive and invasive. A picture of a bear injured by a collar appeared recently online, highlighting problems the tracking collars can pose.

The Trekker is one of several technologies scientists are experimenting with to try to get more information, more easily.

Researcher Randy Creaser is on a tundra buggy adjusting a stereo-vision 3D camera, which looks like two regular 35mm cameras banded together. Right now his research is focussing on the one thing seen in Churchill more often than bears: Tourists.

"Every single year there's a lot of people that come north to take pictures of bears," he says.

Creaser, based at Purdue University in West Lafayette, Ind., is working on a project that aims to make use of the photos all those tourists take. The idea, like the Trekker project, could help track changes in the environment over time, and possibly in individual bears themselves.

"We have a good database of photographs that we can go back in time and look at changes in body condition, body size of the bear over time," Creaser says.

There are also projects in the works that could track bears from space without a collar, using thermal imaging. In theory it would allow researchers to follow a bear year-round, tracking it through its body heat.

None of these ideas are intended to replace existing information-gathering methods, but they could help fill in some of the holes in the research data available to scientists without endangering bears or people.

"It's making things less expensive, and ultimately it's better for the bears and a bit safer for people."

Working out the bugs

Promising as these ideas are, there are issues to be worked out.

Back on the Trekker buggy, for example, this is the second time Krischhoffer has tried to make this idea work. Last year he managed to get a pretty good map of the region, but did not get many images of bears.

The Trekker was programmed to discard pictures taken while it wasn't in motion — precisely when the scientists stopped the buggy to look at a bear.

At one point on this year's trip there are 10 bears within site of the buggy. In fact, one crawls under the buggy before coming around the back and putting its paws up on the back bumper.

Inside, Krischhoffer's colleagues are doing a live webcast talking to students about what they are seeing, even more people will be able to see the same scene through Street View.

"To be able to share this experience all over the world is a big part of what we do."

This time he's confident the camera is rolling.
1 of 0
CBC's Journalistic Standards and Practices|About CBC News