A Manitoba First Nation has banished one of its own members in what chief and council hope is a strong message that illegal drugs won't be tolerated in the community.

A Manitoba First Nation has banished one of its own members in what its chief and council hope is a strong message that illegal drugs won't be tolerated in the community.

Karen Batson, chief of the Pine Creek First Nation — located north of Dauphin, Man., about 315 kilometres northwest of Winnipeg — says a man was served notice on Thursday and given 48 hours to leave the First Nation following a resolution passed by chief and council.

He was suspected of selling prescription drugs and marijuana, and was barred from the community for one year, Batson said.

"Maybe it'll be the wake-up call for other people to stop that kind of behaviour," Batson said by phone on Monday.

She says he's the first person to face banishment from the community itself, and the second to face sanctions for having a suspected role in the community's drug trade. She says another person was evicted from a band-owned home earlier this year, but was allowed to remain in the community.

Batson says there has been some pushback over the harsh stance Pine Creek is taking and there is even talk of a petition being started against chief and council.

"Some people aren't happy with our approach, but we have to look at what's the best interest for the whole community," she said.

The man hadn't been charged or convicted, but was evicted on grounds on "suspicion he was involved in criminal activity that was known to cause turmoil and disfunction," Batson said, adding he "was not pleased" with the decision.

As far as she is aware, Batson says, Pine Creek council's decision is legally binding and would likely hold up in court if challenged.

Batson says she and council have given priority to fighting the illicit drug trade in Pine Creek because prescription drug use and cocaine have become problems in recent years.

"A lot of concerns had been coming forward to chief and council," she said. "It was affecting the youth and various families in the community.

"They asked us to look at how we could tackle that."

Sandy Bay Chief Lance Roulette told CBC News in May that the new rules would see those caught trafficking drugs to youth would be barred from the reserve until they get rehabilitated.

Pine Creek's new regulations also come after leaders from seven Manitoba First Nations in the Dakota Ojibway Tribal Council declared a state of emergency over drug use and addictions.

The Assembly of Manitoba Chiefs says it doesn't have a formal position on the practice of banishing band members from reserves.

"However, the AMC is supportive of any First Nation that wishes to act as sovereign nations and puts measures in place to maintain the safety and well-being of their community and citizens," a spokesperson for Grand Chief Arlen Dumas said in an email to CBC News.

In May, Batson says, mandatory, random drug testing was enacted for chief and council. The protocol has since been expanded to include employees.

"We wanted to show the community that we're good role models," she said.

She hopes the eviction sends a strong message that illegal drugs and prescription drug abuse aren't welcome in Pine Creek.

"It is a big concern and we want to try to clean the community up as quickly as possible," Batson said. "We can't wait around … we are very concerned that there could be more potent drugs coming into the community.

"We don't want to lose anyone in the community, especially the youth." 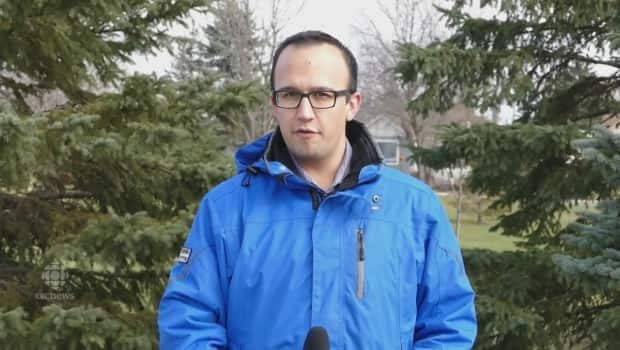 3 years ago
1:47
Pine Creek First Nation in Manitoba has decided to banish a man suspected of selling drugs to send a strong message about such activities 1:47