People in Gimli are marking the 30th anniversary of an event that made aviation history and became known as the Gimli Glider. 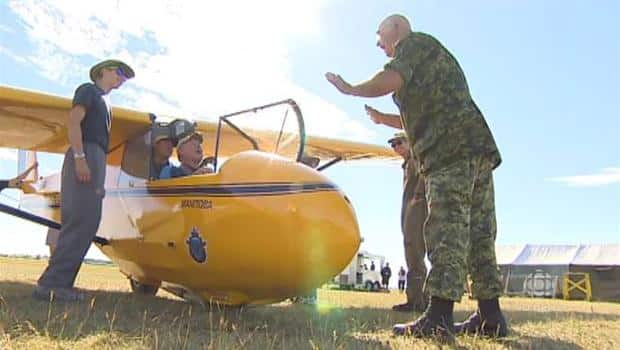 7 years agoVideo
2:07
Tuesday marked the 30th anniversary of the landing of the Gimli Glider -- an Air Canada flight with 69 people on board that ran out of gas while flying over Manitoba. CBC's Jillian Coubrough reports. 2:07

People in Gimli are marking the 30th anniversary of an event that made aviation history and became known as the Gimli Glider.

In July 1983, an Air Canada flight with 69 people on board out of gas while flying over northwestern Ontario.

The pilot who managed to land the plane safely on a defunct Gimli airstrip returned to the site Tuesday to relive the landing. Captain Bob Pearson said he couldn't believe 30 years had passed since the landing.

30 years ago Pearson was piloting a flight from Montreal to Edmonton when the plane’s engine failed and his cockpit controls went black. The plane had ran out of gas and was too far from Winnipeg to land there.

So Pearson managed to land the Boeing 767 by gliding it into the wind and onto an old air strip. Everyone on the flight survived.

A number of cadets at the Gimli Region Gliding School got an opportunity to meet Pearson on Tuesday and one even got to be his co-pilot.

Nico Bautista, 20, had Pearson talk him through his 1983 landing and even got a chance to play teacher.

"It was special because we always hear how the Gimli glider landed here, so to meet and fly with him was an honour," said Bautista. Who added he enjoyed giving the pilot a few tips, "I was critiquing his gliding a bit."

Pearson was also met on the air strip by passengers on the flight he managed to successfully land.

Pearl Dion and her son Chris were both on the flight.

"It's been an interesting adventure, and since we're still alive I'm enjoying it even more," she said. "It feels like yesterday. My memories are still vivid."

Dion’s husband was also on the flight with her that day but has since died. She said the visit to Gimli brought back memories of him and that flight.

"It really brought back memories of my husband. I spent yesterday alone because he was with me at that time," she said.

Dion said she was grateful she and her family survived the flight, but she declined to go up in a glider on Tuesday, saying, "I landed here in a glider 30 years ago, so I think that was enough."

Pearson, however, said he was happy to get a bird’s eye view of the strip again — though now he said it looks a little different.

"I was trying to see if our tire marks were still on the runway, but I guess after 30 years, the intervening rain and snow has washed them all off," said Pearson.

Tuesday night, the town of Gimli plans to name a street after Pearson, making him a permanent part of their history.