The Save Seven Oaks ER Coalition continues to hold out hope that the north Winnipeg emergency room will remain open, in spite of its scheduled conversion to an urgent care centre by September.

A Garden City senior personally collected 4,000 signatures to fight for her local ER to remain open

The Save Seven Oaks ER Coalition continues to hold out hope that the north Winnipeg emergency room will remain open, in spite of its scheduled conversion to an urgent care centre by September.

The group, along with supporters and health care workers from Seven Oaks Hospital, presented a petition with 7,720 signatures to NDP leader, Wab Kinew on Tuesday.

"This is my hospital," said Helen Zacharkiw who alone gathered 4,000 signatures for the petition.

Last July and August, Zacharkiw spent four to six hours a day, seven days a week, standing outside of the Garden City Sears during the liquidation sale with the petition.

Zacharkiw, who has been living in the area for 52 years, says she was personally motivated because she lives with lymphedema.

"In five minutes, my life changes," said the 78 year old. "I need a very strong antibiotic drip... my temperature soars up to 103 within three minutes."

The emergency room at Winnipeg's Concordia Hospital was officially converted to an urgent care centre on June 3.

The change is part of an overhaul of Manitoba's health-care system and means Concordia is now reserved for patients with urgent, same-day issues that are not life-threatening.

Last week, St. Boniface Hospital was forced to stop admitting some people who did not require immediate help for nearly 24 hours beginning Wednesday afternoon due to an overload of patients. Officials with the Winnipeg Regional Health Authority insisted the situation did not put patients in danger, but one St. Boniface Hospital doctor told CBC News hospital staff have legitimate concerns.

Kinew echoed that concern at the rally on Tuesday, saying closing another ER will put additional strain on the system.

"What will happen if they close Seven Oaks as well and all the patients who were coming here have to go to [Health Sciences Centre] and St. B. The situation has already gotten bad but it may get worse," he said.

Health Minister Cameron Friesen said the province is committed to the transition to an urgent care centre and the changes will improve wait times while enhancing patient care and outcomes.

"We acknowledge this change isn't easy for some staff and members of the community they serve, but it is ultimately necessary if we are to deliver better health care sooner," he said in an emailed statement.

He said throughout the changes, patient safety standards and the stability of the health system will be maintained.

Kinew said he will personally deliver the petition to Premier Brian Pallister. 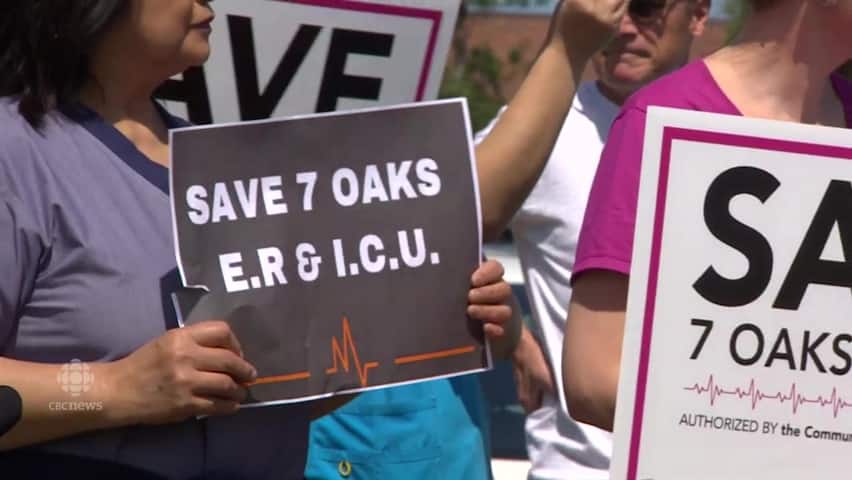 1 year ago
1:45
The Save Seven Oaks ER Coalition continues to hold out hope that the north Winnipeg emergency room will remain open, in spite of its scheduled conversion to an urgent care centre by September. 1:45

With files from Jillian Taylor and Cameron MacLean