Some organic produce in Canada contains pesticides, according to government inspection documents obtained by CBC News — including nearly 24 per cent of organic apples. 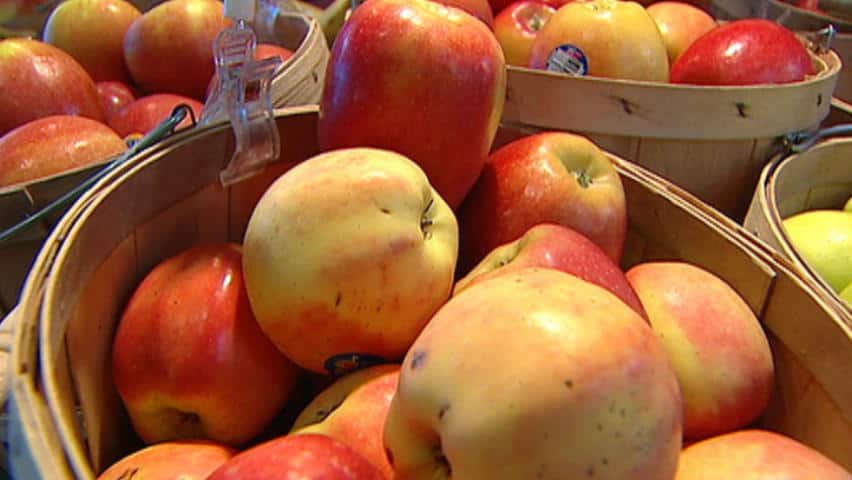 Some organic produce in Canada contains pesticides, according to government inspection documents obtained by CBC News — including nearly 24 per cent of organic apples.

Records released to CBC News by the Canadian Food Inspection Agency show 23.6 per cent of the 178 organic apples tested in 2009 and 2010 contained pesticide residue.

"Based on the limited data we have, we can also say that it appears that these pesticide residues are being found in 'organic' products less frequently and at somewhat lower levels than 'conventional' produce," CFIA officials told CBC News in an email.

Dr. Walter Krol, who tests produce for the State of Connecticut's Department of Consumer Protection, said he has found similar levels of pesticide residue on organic produce.

"Pesticides are ending up in produce somehow and it's not supposed to happen so there are flaws in the integrity," he said in an interview.

Krol noted that pesticides can come from several sources, including post-harvest processing, spray drift or the soil in which the produce was grown. However, he said, the CFIA's test results will not likely reassure consumers.

"If they are concerned about pesticide residues, I don't think it does a very good job of meeting those expectations," he said.

Do you buy organic? Take our survey.

Sara Neufeld, a dedicated organic consumer in Winnipeg, said she is disappointed with the test results.

"Whether they are a consumer of organics or not, an average consumer would think that there wouldn't be any chemicals on those products," said Neufeld, who added she does not mind paying extra for organic produce.

"A lot of what I need to do as a consumer is be able to trust where my stuff is coming from," she said. "Otherwise, I'm going to be tearing my hair out every time I pick up an apple."

More than one type of residue

Many of the 112 individual produce samples from 2010-11 contained more than one type of pesticide residue, according to CFIA documents obtained through Access to Information Act.

The agency's data showed that the organic apples that were found to have pesticide residue contained an average of 0.03 parts per million (ppm) of the fungicide thiabendazole. Conventional apples contain an average of 0.4 ppm of the substance, according to the U.S. Department of Agriculture's 2009 summary from its Pesticide Data Program.

The vast majority of the organic apples with thiabendazole fell within the range measured on conventional apples. Most of the samples were imported from other countries.

"It's a concern for us. From the organic perspective, we'd like people to keep their chemicals to themselves," Holmes said. "The organic sector doesn't want to see these sorts of pesticides, and that's why we're producing products using organic methods."

Only one of the 112 samples violated the maximum pesticide residue limit allowed for safety reasons that apply to all produce. The CFIA said it investigated this one case because it potentially posed a health risk.

The other samples were sold as organic.

CFIA does not certify organic products

The CFIA sets regulations on what can be called organic, but it does not directly certify products as organic. Instead, the agency relies on certification bodies outside of government to ensure producers are complying with the rules.

To be certified as organic in Canada, producers must prove that their crops were grown and processed according to the regulations. The mere presence of pesticides does not prove those organic processes were not followed.

The CFIA currently does not have enough information to track down specific certifying bodies to find out how the pesticide got on certain produce — an issue the agency is trying to address.

"Unfortunately, because there's information missing, that information at this time could not be used to link to a certification body at this time … It's not possible," said Michel Saumur, the national manager of the CFIA's Canada Organic Office.

CBC News has learned of at least one case in which an organic company faced enforcement action due to the deliberate use of a prohibited pesticide.

"We feel that most of this presence is based on non-intentional contamination," Saumur said, adding that work must be done to minimize such contamination through buffer zones and other options.

According to the CFIA's Organic Production Systems General Principles and Management Standards, "Organic practices and this standard cannot assure that organic products are entirely free of residues of substances prohibited by this standard."

The standards document notes that some of the pesticide exposure is beyond the farmer's control.

The USDA's National Organic Program (NOP) has proposed a rule that would require organic certifiers to test produce from five per cent of the farms it certifies before the products hit store shelves.

"Residue testing plays an important role in organic certification by providing a means for monitoring compliance with the NOP and by discouraging the mislabeling of agricultural products," according to the department.

The data CBC News has received is from a special dataset retrieved for the National Organic Program from the CFIA's National Chemical Residue Monitoring Program.

The CFIA says these statistics do not provide a complete picture of the organic sector because data collection is limited, CFIA testers do not need to indicate if a product is organic or not. As well, the CFIA's Canada Organic Office does not conduct its own routine testing as part of the certification process.

Holmes said he would like to see zero pesticides in organic produce, but he added that the CFIA test results are not cause for alarm.

"Data has shown consistently that organic produce has much lower incidence of pesticides than non-organic, and so we're not seeing any big red flags out there right now," Holmes said.

"We'd obviously like to see the system work as best as it can, and we'd like to see less and less chemicals on consumers' plates, so that's why we choose organic."