On the grounds of the Manitoba legislature you will find no shortage of bronze statues honouring the people who helped build the province. What you won't find anywhere is a statue of a First Nations person.

Committee hopes statue of Chief Peguis, a historic 'diplomat,' will be erected on front lawn

On the grounds of the Manitoba legislature you will find no shortage of bronze statues honouring the people who helped build the province.

What you won't find anywhere is a statue of a First Nations person.

A group of Indigenous and non-Indigenous volunteers has been working together for nearly four years to get a statue of Chief Peguis erected.

"It will fill a great void," said Bill Shead, a member of Peguis First Nation and co-chair of the organizing committee.

"Indigenous people of Manitoba played an important role in the establishment of the province and the city of Winnipeg, and I think that has to be recognized."

Indigenous peoples in Canada include First Nations, Inuit and Métis. A statue of Métis leader Louis Riel has sat on the legislative grounds since 1973, but there's never been a statue on the grounds recognizing Manitoba's First Nations leaders.

The new statue has been approved by the province, but now funding has to be finalized and a location has to be decided. Once the location gets approved, the committee will be putting out a call for artists to design and construct it.

Shead hopes the statue will be built on the front of the legislative lawn so every person driving toward the legislature will see it.

Designing the statue will also be a challenge for the artist who makes it, Shead said, since there are no known images of Peguis.

Peguis has been honoured in other locations in Manitoba. For example, a statue of Chief Peguis was erected in Kildonan Park in 1923, and a headstone for Peguis stands in the cemetery of St. Peter Dynevor Anglican Church in the R.M. of St. Clements.

Peguis, a Saulteaux chief, was a defender of First Nations rights, and is known for his role in bringing four other chiefs together to sign the Selkirk Treaty of 1817, which ceded land along the Red River to settlers.

"Peguis was a diplomat," Shead said. "His skill at bringing people together and keeping peace was probably his claim to fame."

"It's acknowledged by historians and by the descendants of the settlers today that without Chief Peguis' assistance, the settlement would not have succeeded," Perrin said.

"The settlers were faced with such hardship, lack of food and lack of proper preparation for their arrival."

Representing all treaties in Manitoba

The two men say the statue is an act of reconciliation, meant to represent all treaties in Manitoba. An accompanying plaque will acknowledge that complicated history, Perrin said.

"We're trying to really make amends in many ways to First Nations and the way they've been treated over the years," Perrin said.

"Treaties haven't really been honoured, certainly [the way] First Nations people had every right to expect them to be honoured," Perrin said.

A provincial spokesperson said the statue is meant to forge positive, respectful and inclusive relationships with Indigenous and northern communities.

"It is an important pillar of government's mandate to advance reconciliation with Indigenous communities," the spokesperson wrote.

With the province and the Assembly of Manitoba Chiefs supporting them, the two men still expect it will be another two to three years until a statue is unveiled.

Perrin and Shead said they hope once it's erected, the permanent statue will help both Indigenous and non-Indigenous Manitobans better understand the role First Nations people played in the province's history.

"Monuments have a life that span generations." 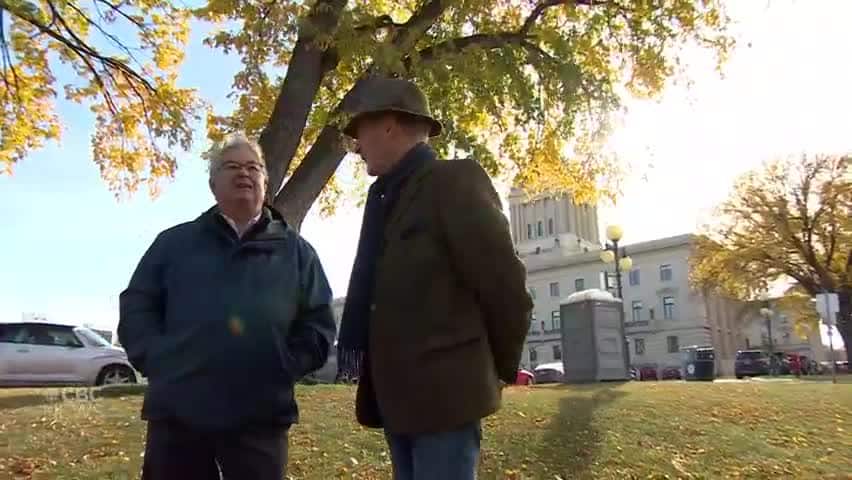 16 days ago
2:29
After years of work, a statue of Chief Peguis is going to be erected at the Manitoba Legislative grounds. 2:29