Patrik Laine heard the chants from Jets fans — "who wouldn't?" — and tried unsuccessfully to keep a poker face when prodded by reporters about his success against Maple Leafs sensation Auston Matthews.

Patrik Laine heard the chants from Jets fans — "who wouldn't?" — and tried unsuccessfully to keep a poker face when prodded by reporters about his success against Maple Leafs sensation Auston Matthews.

His smile betrayed him.

Sitting at his locker after scoring the game-winning overtime goal to complete a hat trick in the Winnipeg Jets' 5-4 win over the Toronto Maple Leafs on Wednesday, the 18-year-old Finnish hockey star had to look down and away from the cameras to release a pent up grin and chuckle.

"I think it was just a normal regular-season game," he said right before turning away.

It was a game that's been highly anticipated since Matthews was selected first overall in the NHL draft earlier this year and Laine was chosen second overall.

'He's a good player, so it's nice to play against him," Laine said. "People are comparing us to each other, I know that. But our team won."

Laine's OT winner came right after Matthews was stopped on a breakaway by Jets goalie Michael Hutchinson. Dustin Byfuglien picked up the rebound and fed a streaking Laine, who ripped the puck past Toronto goalie Frederik Andersen.

"I decided to shoot and it just went right where I wanted. Amazing feeling," Laine said. "It's always nice to score. It's the best thing in the world."

Long before that goal, even before Laine scored the game-tying goal with less than a minute to go in the game, Jets fans began chanting "Laine's better, Laine's better."

Matthews notched an assist in the game but was kept off the goal-scoring column of the stats sheet.

Asked if he heard the fans, Laine nodded.

"Yeah, who wouldn't hear them? It's just an amazing home crowd and they're supporting [us] all the time," he said, thanking the fans for sticking it out after the Jets were down 4-0 after a period and a half.

"It's just amazing to play here. It's good that they're going to support us no matter what." 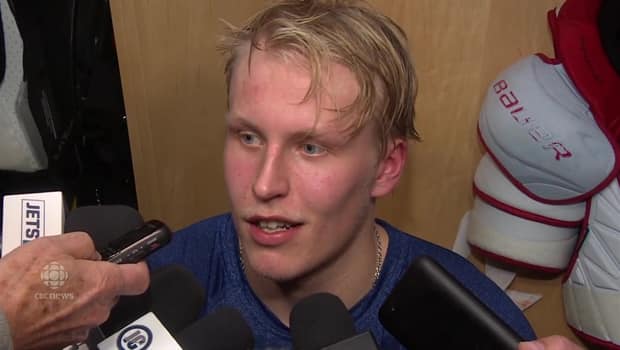 When Laine was pressed about whether he could actually hear what fans were saying, he again called on his poker face.

"Yeah, I heard something. That sounds pretty good," he said, but quickly added, "That's their opinion and I'm not going to say anything about that.

"The first two periods, I was not playing my game. I was, actually, pretty bad."

The performance earned Laine first star of the game as well as the nickname Hattrick Laine in the media. Both he and Matthews — who scored four times in his NHL debut — now have four goals and one assist on the season.

Even some high-profile fans got into the action, tweeting their delight for Laine.

Laine is pleased with the result but knows things weren't looking good early on.

"Those first two periods we were playing so bad, I don't know why, including me. You shouldn't let the other guy score four goals and then start to play," he said.

"It was just amazing to help my team to win with those goals. It was just so cool."

He hopes the big takeaway from the game is that the Jets have proven themselves to be a team that can find a way to win "and that I can score those important goals."

Asked if he and Matthews said anything to each other on the ice, Laine said no — it was all business out there.

"I don't like to speak with the opponents. I'm going to focus on playing hockey."