Manitoba's Progressive Conservatives say they will hire more health-care workers if the party is re-elected on Sept. 10.

Just as Brian Pallister finished standing in front of reporters and cameras, promising to hire 200 more nurses if re-elected as Manitoba premier next month, the NDP released new numbers that appear to show a reduction in the amount of nursing and health care aide positions at Winnipeg hospitals.

Pallister vowed Monday to hire 200 new nurses over the next four years and 80 more rural paramedics while taking a few swings at the NDP.

"The New Deception Party tells the people of Manitoba that there are cuts happening but that is untrue," Pallister said at the Minor Illness and Injury Clinic.

Just as Pallister's press conference concluded, the NDP released charts that list nursing and health care aide positions in the Winnipeg Regional Health Authority, vacancies, and the total number of positions throughout the WRHA.

The NDP got the information through freedom of Information requests it received in May and June. The party immediately claimed Pallister has "fired" 250 health care aides and nurses from Winnipeg hospitals since 2018 but the data the NDP received doesn't exactly support that claim.

The charts appear to show a reduction in 251 positions between the fiscal years of 2017-2018 and 2018-2019 but do not breakdown the changes by job type. The documents give no indication or reason for the reduction in job positions and the WRHA is not doing media interviews or willing to verify stats in response to election announcements.

There's also a warning above the charts that says the WRHA is using a new methodology to improve the accuracy of data from its human resources department.

"Therefore any type of comparison to prior periods should be done with caution," the warning says.

The Paramedics Association of Manitoba called Pallister's pledge exciting and said the PCs are the first party to approach the group. Administrative director Eric Glass had praise for changes the Tories have made since taking office.

"There's no doubt that there's been some learning curves and some growing pains with respect to ER closures and that type of thing but I think overall the system is working fairly well from a paramedic perspective."

Manitoba NDP Leader Wab Kinew disputed Pallister's assertion that cuts have only been made at the top and not on the front lines.

"We've all visited emergency rooms. We have loved ones who've told us their horror stories about wait times. You have a document that's been shared with you today that shows they cut 250 nurses and health care aides in Winnipeg alone over the last year."

"Mr. Pallister at election time has a habit of running around and saying that he won't cut health care but we know what his time in office shows. The only thing he does is cut services and that makes it worse for the average family in Manitoba."

Manitoba Nurses Union President Darlene Jackson said she'd welcome any addition to the workforce in health care but is skeptical of Pallister's promise.

"It's very difficult for me to believe that they're going to be able to hire 200 new nurses into new positions when we have so many vacancies in the system right now and those are positions that we have not been able to fill," she said.

Jackson said it's been hard for the union to find out how many nursing vacancies there are because the Winnipeg Regional Health Authority hasn't responded to the union's FIPPA request from July 8th.

Jackson said about a year ago the nursing vacancy number for just Winnipeg sat at about 1,000 and in April this year, the union got data from St. Boniface Hospital that showed 200 vacancies at the one hospital. The union believes there are several hundred vacancies in the Winnipeg region.

She questioned the timing of Pallister's promise to create a front-line idea fund in which he said the Tories would invest up to $40 million for innovative projects brought forward by health care staff that would reduce waste. Jackson said nurses have been asking for two and a half years for a seat at the table.

"It's almost a little insulting that now we're going into an election we're asked for input."

"The Pallister government promised to protect front-line workers and cut at the top. Instead, they have created an entirely new layer of bureaucracy — ignoring and laying off front-line workers all while making their work so hard people feel they have no choice but to quit," he said in a statement. 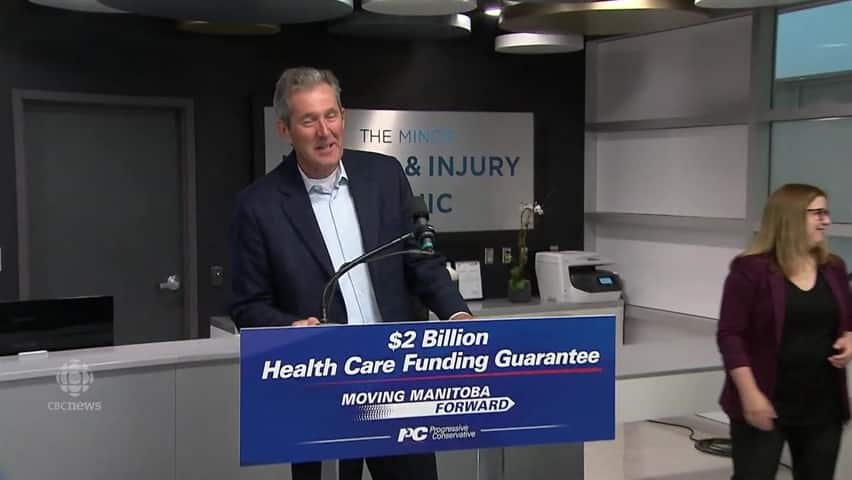 1 year agoVideo
2:18
The Progressive Conservatives are promising to hire new nurses and paramedics if re-elected next month. But as CBC's Austin Grabish reports, the promise comes as the NDP revealed new numbers and accused the Tories of cutting health care jobs. 2:18