Manitoba Premier Brian Pallister rejects the claim his government is stuck in an "ideological debate" over how to deal with a growing meth crisis.

Manitoba premier not willing to commit to safe consumption sites

Manitoba Premier Brian Pallister rejects the claim his government is stuck in an "ideological debate" over how to deal with a growing meth crisis.

Pallister was also cool to the idea of safe consumption sites as one measure to deal with the problem.

Last week Daphne Penrose, Manitoba's advocate for children and youth, said young people were dying from drug overdoses and suicide while the province remains mired in "ideological debate" about treatment.

"While other provinces move forward in addressing Canada's opioid crisis with … decriminalized public health approaches to substance misuse, Manitoba lags behind, seemingly stuck in an ideological debate, at the grave expense of too many children and youth," she said.

Meanwhile, the Manitoba Nurses Union is calling for heightened security in Winnipeg emergency departments to manage an increase in violence they say is related to a more than 1,200 per cent surge in meth-related visits in the past five years.

Pallister was at an announcement in La Broquerie for the expansion of mobile cellular services when he was asked if ideology played a role in his government's deliberations around the crisis of meth and opioid addiction and overdoses.

"The only ideology that is at work with me and my colleagues is better results for people, so that's what we're focused on. And if that's an ideology, I'm proud to have it," Pallister said.

"I'm not one to throw money around without a purpose," he told reporters.

Pallister said the growing issue of drug overdoses is top of mind for his Progressive Conservative government.

But the Manitoba premier was noncommittal to several calls for the opening of a safe consumption site in Winnipeg for drug users.

Community groups such as the Bear Clan report finding thousands of discarded needles while doing patrols in some neighbourhoods.

Pallister referred to a recent report done for the province on mental health and addictions which didn't include a call for safe consumption sites.

"The Virgo report didn't highlight safe injection sites as some of the key aspects that would address the issue," Pallister said.

A safe consumption site was mentioned in a draft of the report but didn't make it into the final version.

When pressed on a time frame for government action on the drug crisis, Pallister did say some initiatives would come "in the near future."

"There are things being discussed. I wouldn't give you a specific timeline. Frankly, I would say we all know the urgency," Pallister said.

Pallister said his government was working on improving access to treatment and was "looking for ideas, looking for partnerships" to address the issue. 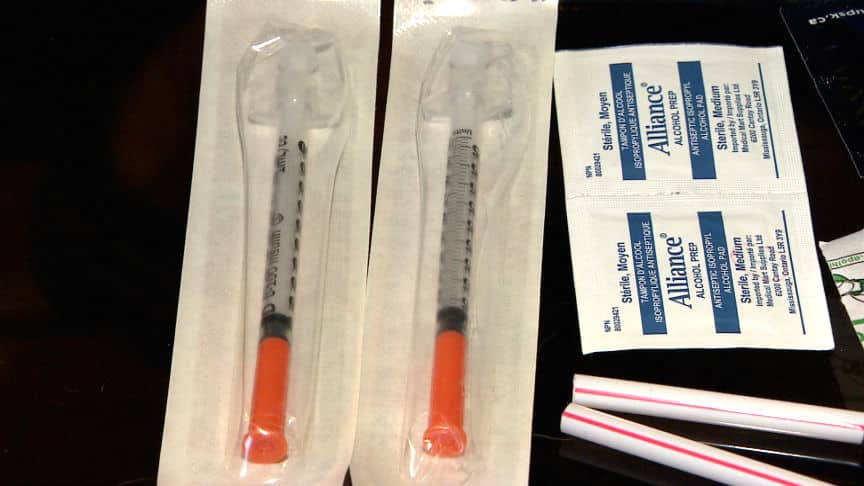 Manitoba premier not willing to commit to safe consumption sites

2 years ago
1:57
Manitoba Premier Brian Pallister rejects the claim his government is stuck in an "ideological debate" over how to deal with a growing meth crisis. 1:57

Pallister was also asked about the resolution passed Sunday at the Manitoba Metis Federation's annual general assembly, demanding an apology for calling the MMF's deal with Hydro "hush money."

"No, I don't regret that statement at all," Pallister said. "We're not in the business, as a government, of trying to buy favour by paying money to people so they like us. What we are in the business of is making sure people are compensated fully and fairly when a hydro project or any other government-led project is built."