Winnipeg's iconic Paddlewheel Restaurant has closed early on its last day of business, after an unexpected turnout left staff without enough food to serve to any more customers. 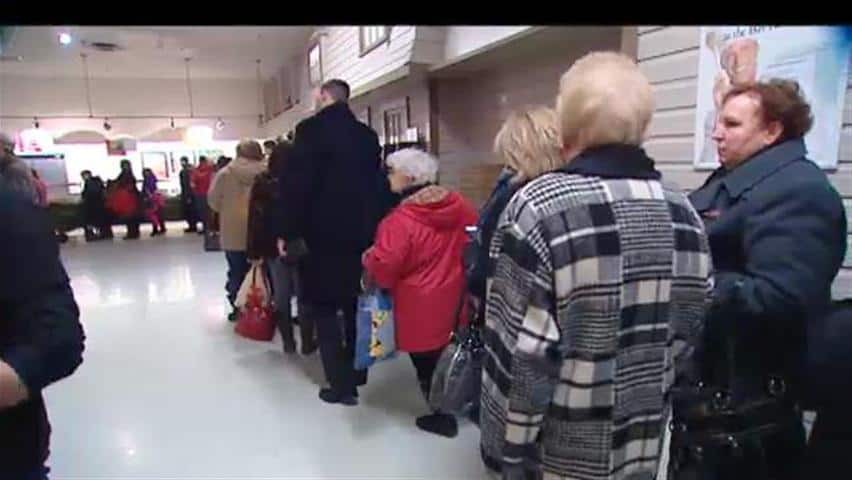 8 years ago
2:06
The Paddlewheel, an iconic restaurant on the top floor of The Bay in downtown Winnipeg, closes its doors for good, but not before a rush of customers arrive for a last meal there. 2:06

Winnipeg's iconic Paddlewheel Restaurant closed early on its last day of business Thursday, after an unexpected turnout left staff without enough food to serve to any more customers.

The cafeteria-style eatery on the sixth floor of The Bay at Portage Avenue and Memorial Boulevard opened in October 1954 and has served generations of Winnipeggers.

Known for its steamship facade that gave the illusion of being on a paddlewheel deck, complete with painted steam clouds on the ceiling, the restaurant was immensely popular at one time.

But in recent years, the expansive dining area has more resembled a ghost ship.

On Thursday, however, it was like old times with lineups and full tables.

Lynn Squair, who showed up for one last time, said losing the restaurant — and the grocery store in the basement at The Bay — is a big loss for people in the inner city.

"This is an institution. My sister and I have been coming here since we were little girls with our parents," she said.

"We used to come here for the Santa's Breakfast. I had to make the pilgrimage [to come one last time]."

The iconic restaurant was slated to get a major makeover as part of The Bay's move to rework itself as a high-end department store. In addition to the Paddlewheel, restaurants in Bay locations in Toronto, Montreal, Vancouver, Moncton, Regina, and Kelowna, were among those set for renovations.

Future of The Bay downtown

The closure of the Paddlewheel means the downtown Bay location will have much more empty space.

The Zellers store currently located in the building’s basement is slated for closure in March.

Stefano Grande of the Downtown Winnipeg BIZ said the province, the city and The Bay are looking at new ways to use the space.

Grande said a number of similar downtown buildings have been successfully converted into mixed-use developments that include offices and condos.

"Eight floors of retail is just too big in an era where most of the shopping occurs out in the suburbs," said Grande.

But earlier this month, officials with the Hudson's Bay Company and the Compass Group announced the Paddlewheel would shut down on Jan. 24. There is no word on what will take its place or whether restaurants in other Bay locations will still be redone.

The restaurant received such a high turnout on its final day that it had to close early. By 2 p.m., the restaurant had run out of food and was no longer serving customers.

Filmmaker Guy Maddin gave the restaurant a cameo in his 2008 film, My Winnipeg, as a place where the fictional Golden Boy "man pageants" were judged by Mayor Cornish.