Broose Tulloch's love of space took off when he was a kid in the 1970s but the idea of actually going into orbit seemed so distant.

'It was a very important part of my childhood. It's not just a garbage can. It's space'

Broose Tulloch's love of space took off when he was a kid in the 1970s, but the idea of actually going into orbit seemed so distant.

Now it's just a few steps from his front door.

On Father's Day this past June, Tulloch was surprised by his wife and three-year-old daughter with a blast from the past — a rare and original Orbit trash can.

He seemed destined to have it. Tulloch lives on Neptune Bay, in a part of Winnipeg known as the Planets, which includes Saturn Bay, Jupiter Bay, Mercury Bay, Mars Drive and the main road, Planet Street.

"I absolutely love that. The stars kept aligning, to continue with the astronomy theme," he said.

To many, the Orbit probably looks like a castoff prop from a 1960s space movie. For others, like Tulloch, it's a vessel full of nostalgia.

"When I was a kid, it was always space age, rocket age, jet age. Everything was the future. It got your imagination going and this [Orbit] just fuelled it even more," he said.

"It was a very important part of my childhood. It's not just a garbage can. It's space. You actually thought that the garbage went into space and that's how they got rid of it."

Tulloch believes his Orbit might actually be the only remaining unit from a program launched in 1965 by the Manitoba government, intended to combat the growing litter problem on highways.

The large, white, eye-catching spheres were mounted on black metal stands and resembled a Sputnik satellite, riffing off the space race theme that consumed much of the news of the day.

The Soviet Union's 1957 launch of Sputnik 1 — the first human-made object to orbit the Earth — rattled the U.S., which worried both that it was falling behind in technological superiority and that the Russians were testing their ability to send weapons into space.

Manitoba's little Sputnik, though, was just there to fight litter.

Made of Fibreglas with 16-inch openings that made it easy to reach through your vehicle's window to dump your garbage, each Orbit was set back from the shoulder so cars could safely pull over.

Highway signs would signal an upcoming opportunity to "Put your trash into Orbit," with a countdown sign every minute starting from 10, and then the final 10 seconds as well.

"Oh, my God, the countdown," said Tulloch, who would see the signs during rides in the family car to his grandparents' farm in MacGregor, about 100 kilometres west of the city. "You could almost hear that NASA voice saying '10 …9 … 8 …'"

The program began with 10 Orbits set along the TransCanada Highway, but it was an immediate hit and more were soon added to highways around the province.

"The success of the Orbit trash cans … has prompted the province to order 100 more of these unique garbage cans," The Rivers Banner newspaper reported Oct. 14, 1965.

"Parents relate how the children have developed new games from the idea of the project," the Steinbach Carillon reported on Aug. 31, 1967, quoting a dad who said, "How could I dare chuck litter from my car with my three boys giving the countdown whenever we approach an Orbit trash can?"

WATCH | The trash can full of nostalgia: 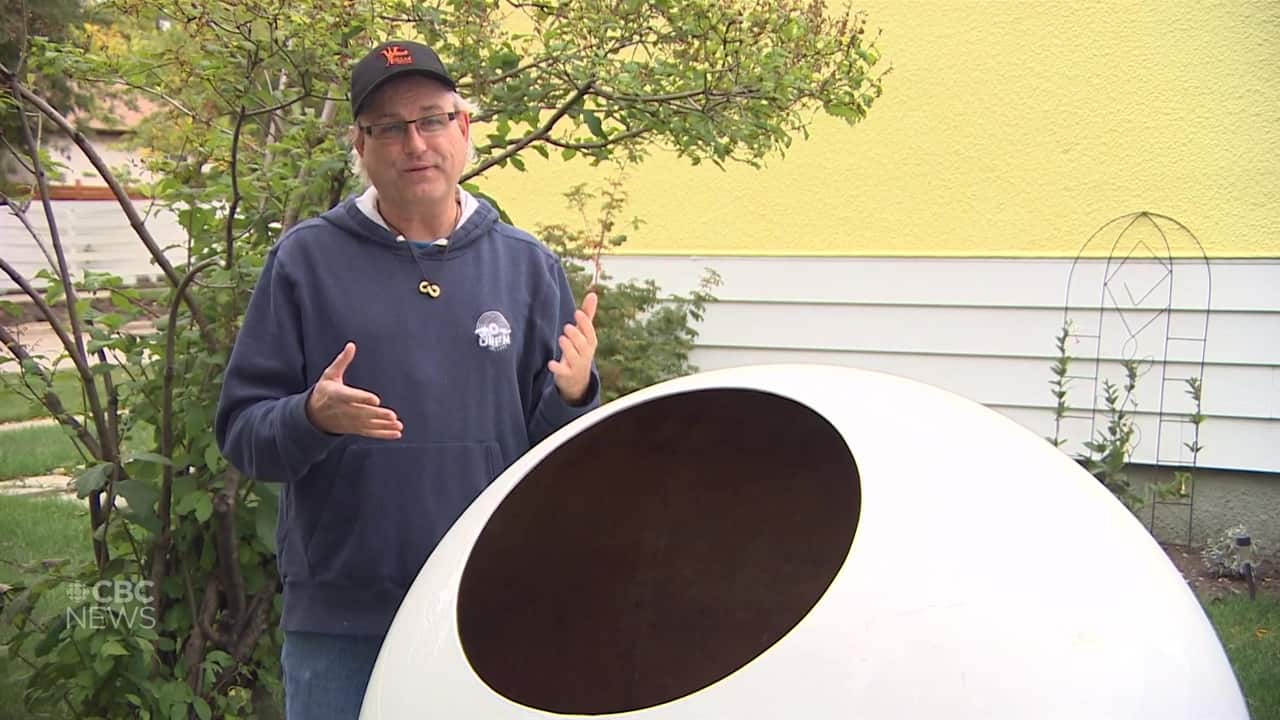 Put your trash into Orbit

2 months agoVideo
1:27
To many, the Orbit probably looks like a castoff prop from a 1960s space movie. For others who drove down the TransCanada Highway, this trash can is a vessel full of nostalgia. 1:27

Launch pads were also set up next to the Orbit, dispensing free plastic bags for people to take and load up until they needed to pull off again.

Peter Boychuk, a traffic sign technician with the highways department, was the man who came up with the design of the Orbits, which were constructed by Duraplex Products Ltd. of Winnipeg.

The minister of highways at the time had offered up a few ideas for a roadside trash can, but none appealed to Boychuk, who recalled in a 2015 interview with CBC that one proposal was a fish with its mouth open.

Boychuk, like Tulloch, was strongly influenced by the space theme of the day, "so I dingled around and came up with this sphere," he said.

Initially, it was called the Litter Sphere, before more brainstorming came up with Orbit.

The program's success prompted the City of Winnipeg to contract smaller ones for some downtown streets, which Boychuk nicknamed Little Orbit Annies.

Each unit was anchored to its heavy metal stand, which in turn was bolted into concrete buried into the ground.

"We didn't want people picking them out and taking them home," Boychuk said.

Instead, other things happened.

An Orbit on Highway 7 was turned into a flaming ball on Halloween night 1968 when its contents were set ablaze, according to the Stonewall Argus and Teulon Times, a combined newspaper. Based on the tone of the article, the damage wasn't too serious — there were flames but no lift off.

"It failed to compete with the orbital activities of the Soviets and U.S.," the newspaper reported.

A month later, on a cold and snowy morning, a highways department supervisor spotted smoke coming from an Orbit along the TransCanada Highway.

He was about to spray a fire extinguisher when he saw two men curled up inside the four-foot-wide bowl, according to the Steinbach Carillon. One was holding a rolled-up newspaper in his hand like a torch to stay warm.

Others tested the durability of the Orbits, filling them with bullet holes during drive-by target practice and in one case, a dynamite stick, according to a December 1969 Free Press story.

"It got out of hand," Boychuk recalled in the 2015 interview, noting people began using them as an alternative to the landfill.

Newspapers reported the cans being stuffed with oversized bags of household garbage, the occasional animal carcass, and even bags of sewage, which were blamed on commuters from cottage country. People began to leave old furniture and mattresses next to them as well.

By the late 1980s, there were only about 50 left, as the cost to replace damaged ones had grown to about $900 per unit. After 30 years, the Orbits fell from grace in June 1997 when the program was ended.

Tulloch believes his Orbit might be the only one left.

"My understanding is that [the province] was going to throw them out, and this artist grabbed them and it turned them into yard art — ladybugs and things," he said.

"This was the last one that hadn't been turned into that. That's my understanding, but you know, that could be urban legend."

His wife's uncle, James Rewucki, created a short documentary in 2013 called Where Have All The Orbits Gone?  Rewucki spent weeks searching until he located one last Orbit in a highways department storage yard in Brandon.

No one from the provincial government was able to find information about where the Orbits ended up after the program was decommissioned. "Several Orbit trash containers" were advertised for sale at an auction in Brandon in 2001.

There are also anecdotal stories about Orbits being turned into backyard fire pits and used as obstacles in miniature golf courses.

Tulloch's Orbit has a few cracks he intends to get repaired and then set it on display in his front yard, over the city's water main valve "so we never have to worry about running over it with the lawnmower again."

"And we're going to put a planter in it, maybe with some galaxy wave petunias or cosmos. We hope, with the flowers coming straight out of that opening, it will look somewhat like a comet — and that nobody misinterprets it for a garbage can."

In the meantime, the Orbit stands on the lawn near his driveway, inviting reactions and conversations.

"The reaction has been universally great. The people who know what it is, their eyes light up and they almost swoon because it's something from their past that they remember fondly," Tulloch said.

A few weeks ago, a city work crew was standing in the street and Tulloch went out to ask if he needed to move his car.

"The foreman goes, 'Oh no, no, I was just telling the young 'uns about what you got there.' So he was giving them a history of the Orbit because they had no idea what this thing was," Tulloch said.

"It's one of those things that everybody loves that it's in their neighborhood, but happy that it's not on their yard."