A league of their own: Organized online gaming gives students a chance to rep their school off the field

Winnipeg high school students have found a new way to compete with their rival schools, and they’re taking the battles off of the athletic field and into the online world. Esports, a form of competition using online video gaming, has come to Manitoba high schools with the launch of the Manitoba High School eSports League.

Winnipeg high school students have found a new way to compete with their rival schools, and they're taking the battles off of the athletic field and into the online world.

Esports, a form of competition using online video gaming, has come to Manitoba high schools with the launch of the Manitoba High School eSports League.

"High schools have taken this on as another extra curricular activity and now we have high schools competing against each other in esports," said Brian Cameron, principal at the Louis Riel Arts & Technology Centre (LRATC).

"It's really taken off, it's become another venue for kids to be able to compete in, and in a lot of cases, a venue for the kids who maybe don't play sports but now get to be a part of a school team," he said.

The idea for the league began after students within the school were challenging each other online, then eventually brought their friends from other schools into the fold. Over the last two years it's expanded to involve 11 high schools with 14 teams.

"We could see that this was growing, that it was an area of interest that kids were really connecting to," said Cameron.

The school decided on the game League of Legends, a multi-player online battle game that's popular with high school students and easy to play as team.

"It's fun, it's a cool after-school activity you get to do with some friends," said 16-year-old Kaiden Roach.

"I saw it as a chance to get to know people, because we're all students from different schools."

Students at the LRATC come from a variety of high schools to take vocational training while completing their high school diplomas.

There are no sporting programs offered out of the school, so for some of the students on the gaming team, the league is their chance to belong to something.

"I just wanted to have fun and meet new people and try to compete with everyone in the province," said Mikko Lopez, the LRATC team's unofficial captain.

"It kind of feels good to represent something while you're playing."

Teams are made up of five to 10 students from Grades 9 to 12. Schools can have up to two teams in the league, and any school in the province can join.

"One of the nicest things about esports is that kids don't have to physically be here to compete," said Cameron.

"We can have kids competing in Thompson against kids that are in Emerson."

The students enjoy having an opportunity to represent their school pride, without having to play traditional sports.

"We have kids coming from all backgrounds, all shapes, sizes, are all competing and playing together and getting along and having fun together in this new and fun format," said Cameron.

The teams began their season on March 6, and will play two games back-to-back each Wednesday until the end of April.

Playing online means students don't have to travel to other locations to play, keeping the costs of running the program at a minimum.

"There's no gymnasium to book. There's no refs to pay for. It's all just simply sit down at a computer, schedule a time and compete," said Cameron.

The gamers use computers within the school and students already own the necessities, like headphones and gaming keyboards.

Each team pays $75 to help with the cost of the championship round, which will be held in the LRATC gymnasium on April 27 and will be projected onto a screen for spectators to watch.

The winners will get some kind of trophy or banner to hang at their school, and the league is also planning to pay for a website.

"This gives them the opportunity to be together, to compete together, to play together in a venue that maybe isn't the norm," said Cameron.

Students practise as much as they want, and most are already playing the game several hours a day.

"I just want people to know that esports is a sport too. It's not just people sitting down and just playing," said Lopez, who admits to playing about five hours a day.

"We're actually competing with each other and earning titles and representing something," he said.

Parents have been on board with the league because it takes something their kids are doing anyway and adds a teamwork component, Cameron said.

"We haven't had a single parent say that my son or daughter can't play because they're already playing it enough or we don't believe in it," he said.

"It's the teamwork part of it."

The students also learn how to compete in a respectable way, build relationships and learn to work in groups, Cameron said.

Despite parents being on board with the league, 18-year-old Lopez said not all parents see the value in gaming.

"At first they said it might ruin me," laughed Lopez.

"Video games actually help us build our reflexes, improves our reaction times in real life," he said, adding he'd like to pursue a career in game design or computer technology.

Esports is a way for the whole school to get involved, Cameron said. Several students come out to watch the battles and also stream them online.

When the league first started, Cameron said there were more people watching the exhibition game online than a recent high school football game, which had also been streamed.

"The kids love watching each other compete in these games as much as they love playing," he said.

Watching esports online is a major trend worldwide, with many tournaments offering prizes of millions of dollars, and even post-secondary institutions are getting in on the games.

"Major colleges and universities across North America are actually recruiting esports athletes to compete with them," said Cameron.

Each of the LRATC players says they watch esports on sites like YouTube and Twitch, almost as much as they game, in order to better their skills.

"I do both at the same time a lot," said 16-year-old Colin MacPherson.

"There's a lot of money in playing professionally." 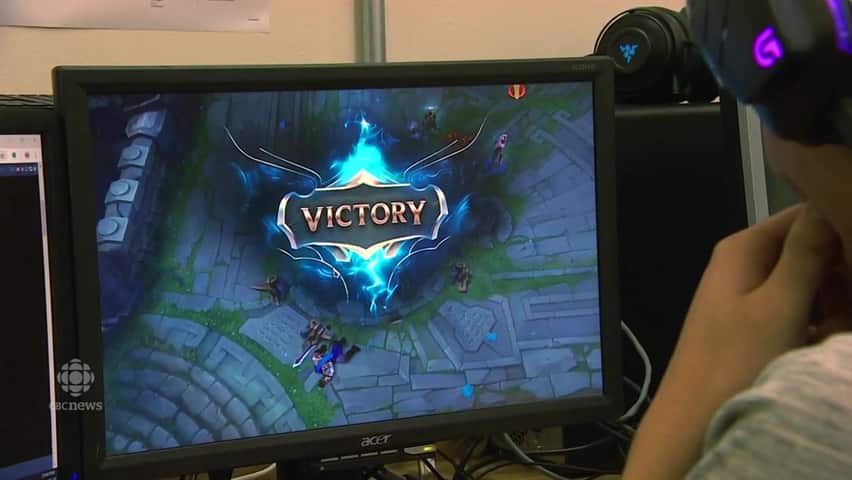 Battling it out online

2 years ago
2:10
Winnipeg high school students have found a new way to compete with their rival schools, and they're taking the battles off of the athletic field and into the online world. 2:10
CBC's Journalistic Standards and Practices|About CBC News