OmniTrax under fire in Churchill after company closes port

Residents met on Thursday to discuss OmniTrax's decision to close the Port of Churchill and reduce freight service to the northern Manitoba town. 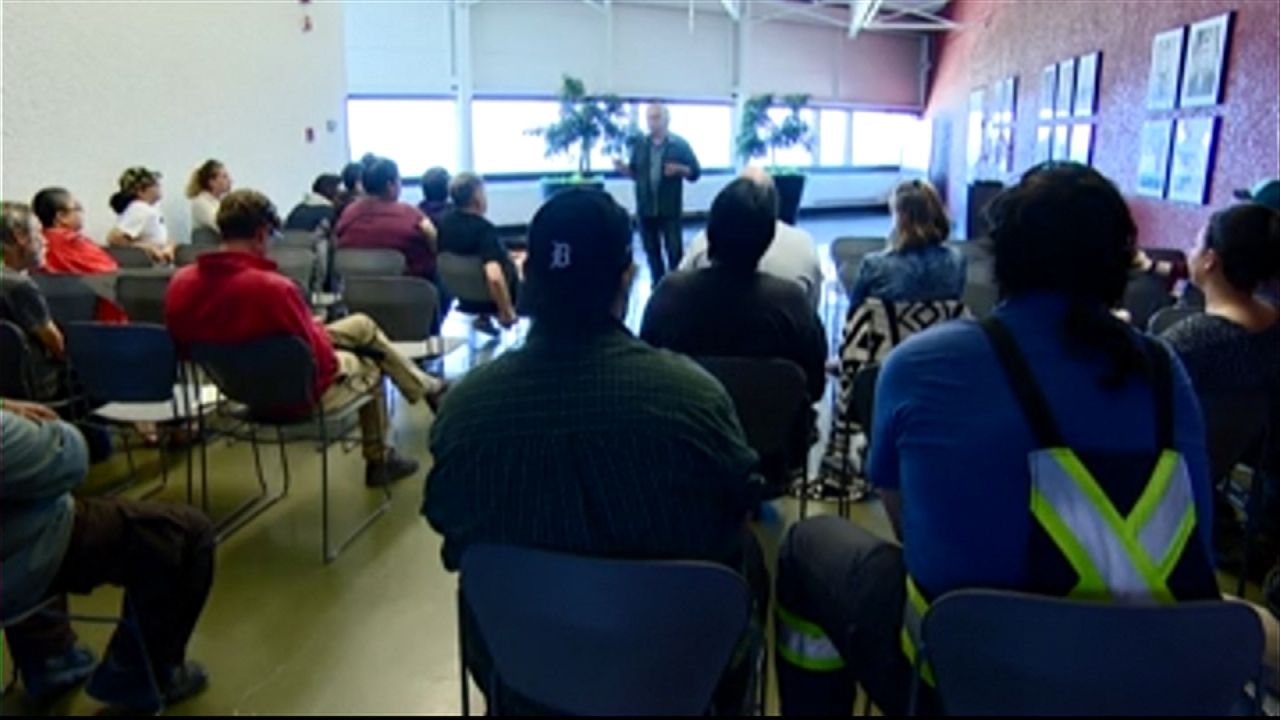 7 years ago
Duration 1:43
Churchill residents met with Flin Flon MLA Tom Lindsey on Thursday to discuss the closure of the Port of Churchill and how it will impact the local economy.

Churchill residents met with Flin Flon MLA Tom Lindsey on Thursday to discuss the closure of the Port of Churchill and how it will impact the local economy.

About one in 10 Churchill residents — a town with a population of about 750 — work at the port at some point through the year.

CBC is in Churchill Thursday to find out how the town is coping with the news.

Some at Thursday's meeting expressed anger at port owner OmniTrax saying the town is "screwed," others demanded to know where the company spent millions of dollars in government subsidies. NDP MLA Lindsey said the town has to "stick together."

"It was sad. It was almost like somebody died, you know? It was so disheartening," Palmer said.

She said she worries if Churchill can recover from that big a hit.

"There's not enough jobs for everyone in town. There just isn't," said Palmer.

OmniTrax's decision came after a dismal year for shipments in 2015 and a slow summer this year.

The manager of a general store in Churchill says the Denver-based company OmniTrax is not acting in the interest of northerners.

News this week that OmniTrax will close the port as well as reduce freight service was a "huge blow" to the town, said Erwin Borau, who manages Tamarack, which sells everything from parkas to groceries.

"It's union jobs. They pay good wages. In good years, the employees would get a lot of overtime," Borau said.

"When you lose that many good jobs all at once, it's definitely going to have an impact."

Along with the port layoffs, OmniTrax officials announced they are also cutting railway freight service to Churchill in half, a decision Borau called "unfair."

He worries the quality of food available in town will go down now that shipments to the community will be reduced from two to one shipment per week.

"It's tough enough to get fresh produce up here, good quality produce, because it takes three days to get here from Winnipeg," he said.

OmniTrax doesn't have a reason to care about Churchill, said Borau.

"It just seems to me to have an American corporation be responsible for northern residents just doesn't seem to add up," he said.

Borau hopes the government will step in to make sure Churchill continues to get regular rail shipments.

Manitoba Premier Brian Pallister said Thursday the province will not bailout OmniTrax in exchange for the company re-opening the Port of Churchill.

with files from Sean Kavanagh