The Winnipeg-based developers jokingly call it "the Ojibway Netflix." It's all part of a high-tech push to keep Canada's Indigenous languages from disappearing.

"This tool brings the exclusive Ojibway language into the classroom, into the living room, into the home with the young kids," said Darrick Baxter, founder and CEO of Ogoki Learning Inc. He's originally from the Sandy Bay Ojibway First Nation in Manitoba.

"The tech now, with Google Chrome, with set-top boxes, with smart TVs, with iPads in the home all the time, it's a perfect opportunity to start to teach and revitalize and reinvigorate the mind of young people to start to speak Ojibway."

Baxter and his team have already released about 130 smartphone and tablet apps to learn languages. But this is the first to stream Ojibway language TV programming – both teaching videos they've created and content from other sources.

They hope to get the platform into schools and homes as a learning tool, but also as an entertainment source.

For now the content is free, but Baxter may eventually move toward subscriptions, pay-per-view or advertising to help pay for content. His work isn't funded by any government grants.

The family with the largest number of people is Algonquian, which includes Cree, Ojibway, Innu/Montagnais and Oji-Cree.

According to the 2016 census, the number of Aboriginal people who could speak a native tongue has grown by 3.1 per cent since 2006. One in five First Nations people reported being able to conduct a conversation.

It also found more people — mostly young — are learning an Indigenous language as a second language.

It also found more people — mostly young — are learning an Indigenous language as a second language.

Ojibway, Cree and Dakota are some of the languages expected to survive at least another 50 years, but that doesn't mean they're not endangered, says Cary Miller, head of the Native Studies program at the University of Manitoba.

"There certainly have been pressures toward language loss, both the historical context of boarding schools and adoption outside of community, as well as the innundation of new media which has all been in predominantly French or English," she says.

As the Indigenous population grows in Canada, Miller believes healthcare workers, social workers, police and justice officials should also be exposed to their languages.

"The more we can encourage to see our Indigenous languages as normative, as part of Canadian culture, the better we are. Both in terms of bringing them into that language and crossing those communication barriers, but also preserving our language," she says, adding initiatives such as Ojibway TV could help.

"Having these kinds of accessible media opportunities for using the language is enormously important for keeping it. It not only gets reinforced in the classrooms with our exercises and speaking, but now there's fun media content that we can watch and listen to in our downtime. It extends the amount of time of day that you're spending on language. It extends the vocabulary that you're exposed to." 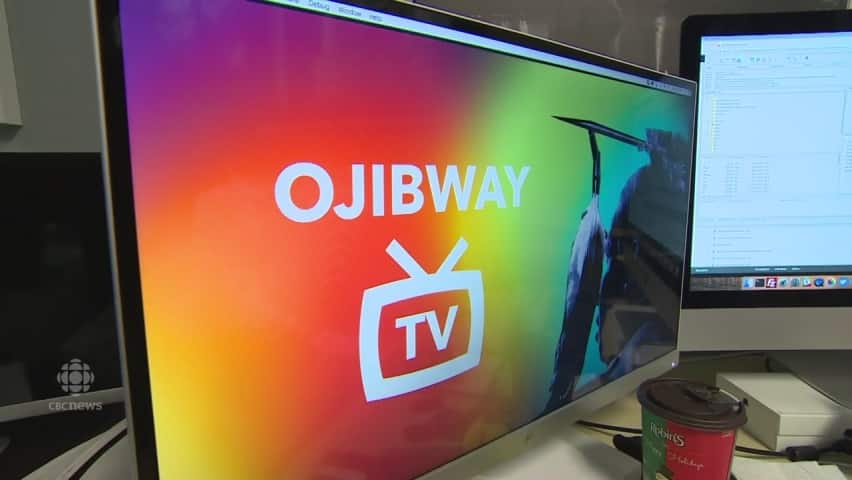 Darrick Baxter would love to see people create content for Ojibway TV like Netflix is doing — maybe an Indigenous version of  Stranger Things, Riverdale or 13 Reasons Why.

"My son puts on Youtube all the time and he watches videos on whatever it might be, so why not reach them with this cartoon video?" Baxter says.

"Each of us play an important role in saving the Ojibway language. If it's a parent teaching a young kid, if it's a grandparent just saying a few words each day. ... So right now our team, a tiny little team, is releasing this streaming app."

The federal government is developing an Indigenous language law on behalf of the Inuit Tapiriit Kanatami, the Assembly of First Nations and the Métis Nation.

It was initially announced in Prime Minister Justin Trudeau's 2015 mandate letter to the heritage minister.

The expected law will support the Truth and Reconciliation Commission's calls to action and the UN Declaration on the Rights of Indigenous Peoples.