'This isn't living, this is existing,' says Winnipeg man who hasn't been out of bed in 4 months

A Winnipeg man who is paralyzed on his left side after suffering a stroke seven years ago says he hasn't been out of bed in more than four months. He says it's because of his size.

Daniel Weger needs help of mechanical lift to get out of bed: care centre worried equipment can't support him

A Winnipeg man has been lying in a care home bed for four months because he says there is no equipment to lift him out and nowhere for him to sit.

Daniel Weger, 56, had a stroke seven years ago and is paralyzed on his left side. He's been in and out of hospitals and care homes and has been in the Charleswood Care Centre for three years.

Four months ago, staff said his wheelchair was falling apart and could no longer support his weight. They had concerns the mechanical lift to get him out of bed might not be able to support him either, Weger said.

It's left him with bed sores and feeling as though he's been forgotten about and discriminated against — all because of his size.

"There's a point when you say, 'This isn't living, this is existing,'" said Weger. "You wake up alive, that's the good thing, but there could be better."

The former truck driver estimates he weighs over 400 pounds, but admits he hasn't been on a scale in a while.

"They were concerned about my wheelchair not being able to hold my weight … it was looking like it was wearing down," he said.

"They decided, for the time being, to declare me bedridden."

He said that declaration came sometime in February and he hasn't been taken out of bed since then.

"To get out of this room, to be able to interact with people, it would be a world of difference," he said. "When you're in the same bed for four and a half months, you do a lot of looking toward the hallway when the door is open."

Weger, who is under the care of the Public Guardian and Trustee of Manitoba, said he's worried he may be gaining more weight by being bedridden. He said he receives good care from the nurses at the home, but feels the system has failed him when it comes to accessing the equipment he needs.

Patients to find and pay for wheelchairs

The Winnipeg Regional Health Authority can't comment on Weger's case but said when it comes to providing specialized care, it is up to the personal care home to meet an individual's needs.

"The primary responsibility is with the personal care home and that particular health-care team," said Gina Trinidad, chief operating officer of long-term care at the WRHA.

"If Charleswood Care Centre has requested a specific lift for this particular resident, that will certainly be provided," said Trinidad.

The WRHA later said no request for a specialized or modified lift had been made, and that the care home was already equipped with one.

The company that runs the Charleswood Care Centre, Revera Inc., also would not comment on Weger's situation. The company said every resident is involved in the development of their own personal care plan but it is up to the resident to follow it.

"We encourage each of our residents to be as active as possible which affords greater independence," said a spokesperson for Revera in an email.

Revera said that the staff at the care home are responsible for assessing the need for specialized equipment for residents and that wait times vary depending on the level of specialization of the equipment.

Weger said he's never had a conversation with anyone from the Public Guardian and Trustee of Manitoba about his care, only about his finances.

The Public Guardian and Trustee of Manitoba won't speak directly about Weger's case either, but said their role is to administer a person's finances when they have been appointed to do so, and that day-to-day care decisions can be delegated to the care facility or the regional health authority.

"When there is a request for equipment we work with the client and care providers to determine if the request is appropriate, whether the client can afford the request, and whether there might be some other source to provide the equipment or fund the cost," said Doug Brown with the Public Guardian and Trustee of Manitoba.

The WRHA is working to assess the situation and looking into the possibility of placing Weger in a long-term facility that can accommodate his needs.

Currently, there are two places within the health care region that can accommodate patients with similar needs. There are five people on a waiting list to get in. Trinidad said a timeline couldn't be given because it would depend on each individual's needs and when a vacancy might open up.

Weger says he's been waiting for too long.

"I been waiting for over two years," he said.

Weger reached out to Liberal MLA Jon Gerrard, after learning that Gerrard introduced a private member's bill to forbid discrimination based on people's physical size and weight.

"There's no mistaking this sort of situation shouldn't be happening. It's unacceptable," said Gerrard.

Cases like Weger's prompted Gerrard to introduce the bill in the first place.

"Our health-care system really isn't adequately able to deal with people who have a large body and make sure that they have the ability to be mobile in a wheelchair," said Gerrard.

"There first of all needs to be an acknowledgement that people who are of large body need slightly different accommodation than somebody who is just of regular weight and size."

Currently, discrimination based on someone's size is not specifically written into Manitoba's Human Rights Code.

Gerrard said physical size needs to be specified in the code just like gender, ethnicity and sexual orientation are.

"We all know that the number of people who are obese and overweight is increasing," he said.

With Gerrard's help, Weger sent a letter to the Manitoba Human Rights Commission about his situation. He has also written letters to the Winnipeg Regional Health Authority, the minister of health and his local MLA.

"I'm bitter. It almost gives you a feeling that there is a lack of concern when you're hearing from everybody, 'We're working on it as hard as we can,'" Weger said.

Isha Khan, executive director for the Human Rights Commission, said currently, complaints based on obesity can fall under the area of physical disability, which is specifically written in the code.

"Human rights agencies and tribunals across the country, including our commission, have applied a broad definition of disability which is focused on looking at whether or not a person is restricted in their day-to-day activities from interacting on an equal level with others," said Khan.

"In this way, we are able to look at situations where a person who may be obese and otherwise restricted from interacting on an equal level with others is discriminated against."

Weger said he is tired of waiting to get out of bed and wants someone to give him a concrete answer about what is being done. 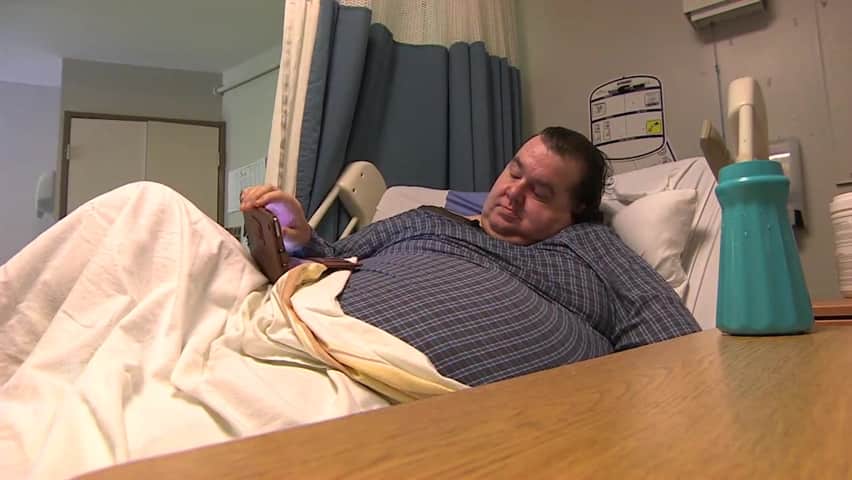 'This isn't living, this is existing.' Winnipeg man hasn't been out of bed in 4 months

4 years ago
2:23
A Winnipeg man is frustrated after he says he hasn't been out of bed in more than four months. Daniel Weger is paralyzed on his left side and needs help getting in and out of his bed at the Charleswood Care Centre. He says staff stopped moving him after concerns about his weight were raised. Weger says he's tried for weeks to get answers about special equipment he needs, like a wheelchair and a lift that can support him. 2:23
CBC's Journalistic Standards and Practices|About CBC News