Five employees and two top-level executives of Nygard International Partnership are accused of spending nearly $200,000 on corporate credit cards a week before the company went into receivership, according to a report filed from the receiver in court.

Five employees and two top-level executives of Nygard International Partnership are accused of spending nearly $200,000 on corporate credit cards a week before the company went into receivership, according to a receiver's report filed in a Winnipeg court.

Richter Advisory Group is reviewing numerous expenses on company credit cards totalling $186,000 "which appear to be personal in nature," says the receiver's first report to the Manitoba Court of Queen's Bench.

"Approximately $85,000 appears to have been charged by the identified employees on their respective corporate cards for cash advances or to purchase, among other things, prepaid cash cards, gift cards, consumer electronics, groceries and alcohol," Richter said in an April 20 report.

Richter said it was concerned the value of Nygard's inventory was deteriorating, in part because of a class action lawsuit filed in New York in February, which now includes allegations from 46 women who claim Peter Nygard sexually assaulted them.

Nygard denies the sexual assault claims and none have been proven in court.

The Nygard companies had a $900,000 credit limit with BMO that could be used by certain employees for work-related purposes, Richter said. The report alleges from March 10 to 19, seven employees, including two directors, increased their credit limits by a combined total of $83,000.

All but one of the employees provided explanations for the spending, saying they were "either legitimate business expenses and/or had the prior approval of Mr. Nygard or other senior management," the report says.

An employee who spent nearly $15,000 on prepaid cash cards said they were to be used for "bonuses and COVID" as per Peter Nygard and a director.

"The receiver notes that certain of the identified employees appear to rely on Mr. Nygard's approval for their expenses even though he had previously stated that he had resigned from all positions," the report said.

In a letter to Richter, one of the former directors said "the Nygard company led by Mr. Nygard personally has been aggressive in its response to the COVID-19 crisis and these purchases were in direct reaction. While Mr. Nygard agreed with this plan, the decision was mine."

The seven former employees have been told they must pay back what they owe, Richter said. The matter is still under review and could end up in court if necessary, the report says.

Jay Prober, Peter Nygard's lawyer, said in a written statement the receiver's report was preliminary and not based on "full and accurate knowledge," and lawyers are contesting the validity of certain statements.

As far as the employees' expenses, Prober said the transactions were "either legitimate business expenses and/or were approved long before Richter was appointed as receiver."

"There was nothing out of the ordinary here."

The report also alleges a Canadian Utilities Card was used to pay more than $100,000 in utility expenses for residential properties in Marina Del Ray, Calif., owned by Edson's Investment Inc., a Nygard company that's not in receivership.

Prober said there are no "unauthorized payments for utility expenses" and the amounts in the receiver's report are "wildly inaccurate, greatly exaggerated."

In an April 27 supplementary report, Richter said it discovered thousands of documents and data were deleted after Nygard Inc. was served with a grand jury subpoena from the United States district court for the southern district of New York on February 25.

A copy of the subpoena attached to the receiver's report says Nygard Inc. was ordered to produce documents dating back to Jan. 1, 2008, for a criminal investigation.

Among other things, the court ordered the company to hand over "all documents, records, and communications concerning or reflecting allegations of sexual misconduct, harassment or assault by Peter Nygard" and "every date in the last five years in which the company purged any data."

No criminal charges have been filed against Peter Nygard in Canada or the U.S.

Richter said its review of the Nygard companies revealed 10,488 files had been deleted by three users; two of them were believed to be IT performing maintenance activities, but the third user was identified as a former Nygard director. 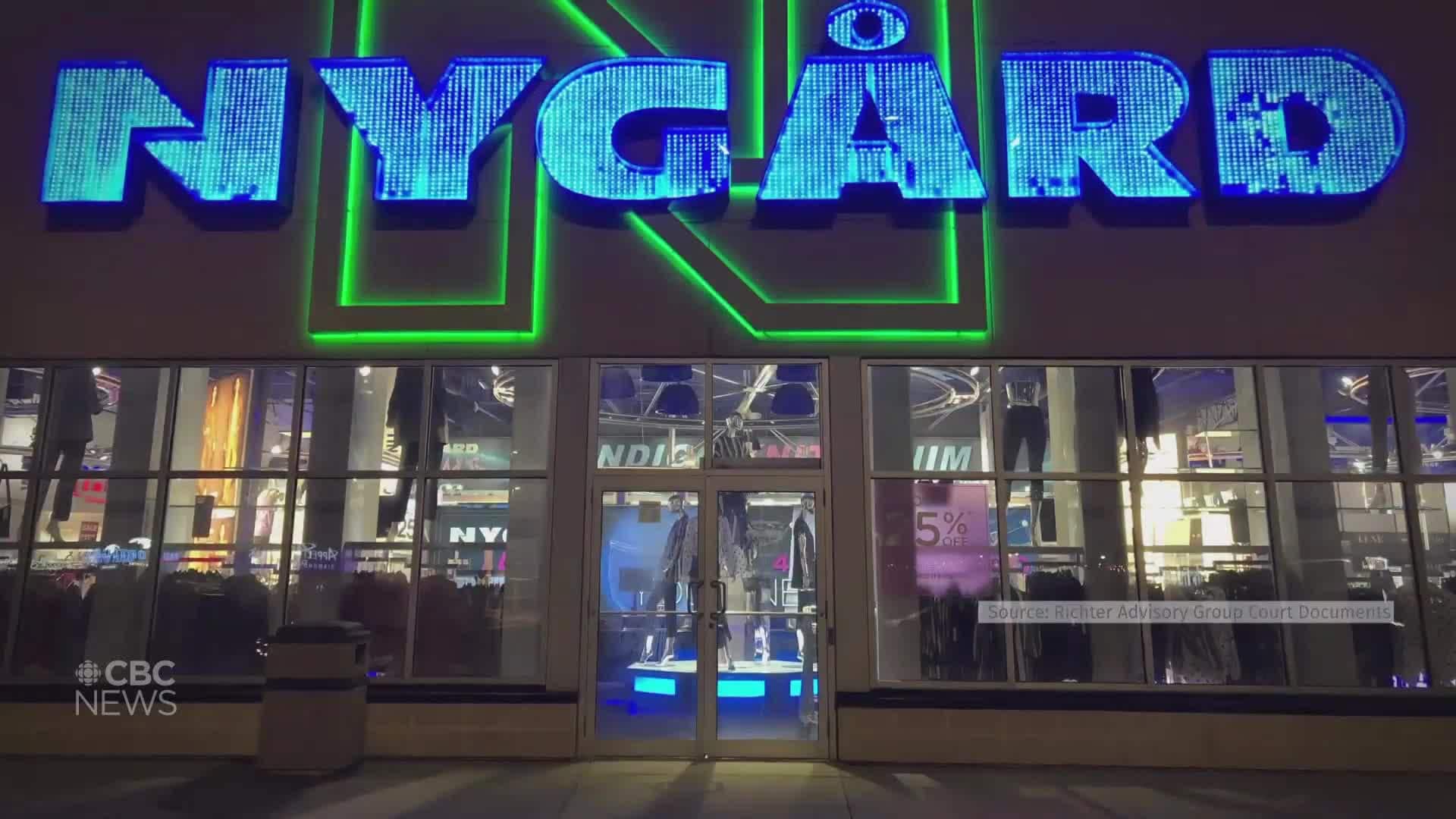 8 months agoVideo
2:11
Five employees and two top-level executives of Nygard International Partnership are accused of spending nearly $200,000 on corporate credit cards a week before the company went into receivership, according to a receiver's report filed in a Winnipeg court. 2:11

The report said a review of the director's deletion history revealed very little activity in the three weeks prior.

"The receiver is currently working with the debtors' IT staff to attempt to recover the deleted data/documents. The receiver continues to review this matter and will consider with counsel what appropriate further action to take, if any," the report says.

Prober said the deletion of files is "categorically denied. First and foremost, no files were deleted."

The Nygard companies owe nearly $50 million to approximately 350 creditors around the world, including 40 Manitobans, according to a list in the receiver's report.

American lender White Oak Commercial Finance is the only secured creditor guaranteed to get its almost $36 million back once Nygard's assets are sold off.

Prober said when Richter took over, "the monies owed were claimed to be approximately half that amount and therefore, if your statement is true, there is concern over the handling of the company's affairs by the receiver and current management."

One Manitoba company doesn't think it will ever see the money owed.

Maksymowycz said he's been arranging transport of merchandise from Nygard's warehouses to Winnipeg for 17 years. That work accounted for about 60 per cent of his business.

"If there was a shipment out of Toronto to come to Winnipeg, I would find a truck and then bring it in, arrange for the pickup and delivery. So it was a substantial amount that I did for them," he said.

Maksymowycz talked to the receiver and wasn't given any assurances he'll be paid. He is currently owed about $14,000, which he said will really impact his "one-man show."

"I wouldn't hold my breath that I'm going to get paid, put it that way," he said. "I guess it all depends on what the secured creditors are going to get and if there's going to be anything leftover."

"With this COVID going around, those goods are not going to be worth very much. You're lucky to get 10, 20 cents on the dollar."

Peter Vandenberg said in 2013, he signed a $33,000 contract to supply jewelry and handbags to Nygard stores in Winnipeg.

"We ordered a whole bunch of stuff in and we had it all ready to go, and then they cancelled the contract," said the owner of Vandenbergs Fine Jewellery in Winnipeg.

"It's been a nightmare ever since we got business with them."

He was surprised to receive a letter from Richter showing the debt was still on Nygard's books.

"That's kind of like getting the lottery at this point in time," he said. "That's pretty much written off."

The report says the biggest outstanding bill in Winnipeg is a little over $1 million owed to the brokerage firm George. H. Young & Co.

But Chris Bachinski, the firm's president, said the $1 million includes what Nygard owes in duty and GST. Importers commonly code money owing for duty and taxes as owing to the broker, Bachinski said.

Richter also said it was trying to track down 40 vehicles registered to Nygard companies that were missing or unaccounted for.

"Based on discussions with former employees of NIP [Nygard International Partnership], the receiver understands that certain of the vehicles within the debtors' vehicle fleet were purportedly sold between January 2020 and March 2020 to related parties and/or now former employees and directors of the debtors," the report says.

Richter said in late March internal security cameras captured seven men breaking into a warehouse in Woodbridge, Ont., and loading "certain Nygard Group assets" onto several trucks. One of the alleged intruders was identified as a former Nygard contractor. The man returned some of the items after being contacted by security, but not all, Richter said.

The receiver said it reported the theft to York Regional Police.

Prober said the "unaccounted for vehicles is unclear and is concerning" and management is expected to clarify further.