Nurses chant for care, not cuts, as Manitoba forges ahead with health-care overhaul

Nurses came waving flags and holding placards, while some looked as if they were off to the spa for a facial treatment in a swipe at a widely mocked recruitment campaign from the government, during a rally at the Manitoba Legislature Wednesday.

An estimated 400 nurses and their supporters demand help for exhaustion

The nurses came waving flags and holding placards, while some looked as if they were off to the spa for a facial treatment, in a swipe at a widely mocked recruitment campaign from the government.

A rally that included an estimated 400 nurses and their supporters spilled from the front steps of the Manitoba Legislature on Wednesday, as health-care professionals demanded that the government stop its consolidation of the health-care system, which they say is putting the care of patients at risk.

Nurses are burnt out from the growing demands of their jobs, they claimed, and have been left to fend for themselves when dealing with violent, meth-fuelled patients.

A few attendees painted their faces as if they were getting a facial treatment in a dig at a recent recruitment advertisement depicting nurses in uniform at a spa. The image was removed after it was criticized as sexist and patronizing.

Lana Penner, the union representative for nurses at Health Sciences Centre, said care is being compromised on a daily basis.

"Nurses are exhausted and injured. They're desperate to care for more and more patients, and they are aghast when their patients say, 'Don't change my dressing, you're too busy. My brother, my sister will do it,'" Penner told the crowd at a lunch-hour rally organized by the Manitoba Nurses Union. "That's not right."

She said nurses are caught in the middle of the consolidation of the province's health-care system, which the province says is necessary to reduce wait times and find efficiencies in an otherwise bloated system. The government plans to close the emergency departments at Concordia and Seven Oaks hospitals this year.

A recent Friday night at HSC's emergency department was so cramped patients were standing in the hallway while they waited for a bed, Penner claimed.

"And there's no privacy, either," she continued. Some patients are desperate for help, she said, "but there's so much need and there's not enough hands to do it."

Manitoba Nurses Union president Darlene Jackson again called on the government to reverse its decision to overhaul the health-care system because she said it isn't working. No government MLA showed up to the rally.

"They need to stop the cuts and closures. They need to let us catch up," Jackson told reporters afterward. "We are drowning."

Jackson asked the government for help, saying it could begin by hiring more nurses.

"We've been in a chronic nursing shortage for many years. We're now in an acute nursing shortage," Jackson said. "There's vacancies out there that aren't filled, and that's what's actually driving the mandated and the voluntary overtime."

Data acquired by the MNU through a freedom of information request shows a 32 per cent increase in overtime hours within Grace Hospital between January and September of 2017 and January to September of 2018.

Health Minister Cameron Friesen attributed the increase in overtime to the "long overdue" transformation of the health-care system.

"There are jobs in the system for all nurses who desire one," his office wrote in an email.

"Positions are being regularly posted throughout the system, including 32 neo-natal [intensive care unit] and 33 critical care positions at HSC Winnipeg and St. Boniface Hospital that were recently filled."

NDP Leader Wab Kinew said the Tories are effectively a write-off when it comes to health care ,and only a change in government would help.

"You don't have to take it from me," he said. "You can take it from the several hundred nurses who showed up today and said that they're frustrated, they're tired and they're worried about their patients because of what this government's doing to health care."

Nurses are being driven to the brink, Liberal Leader Dougald Lamont said, and the government is making it worse.

"In dealing with health care, you should basically treat it the way doctors do, which is to say, 'Do no harm,' and that's not what they're doing," he said. "It's all just about the bottom line." 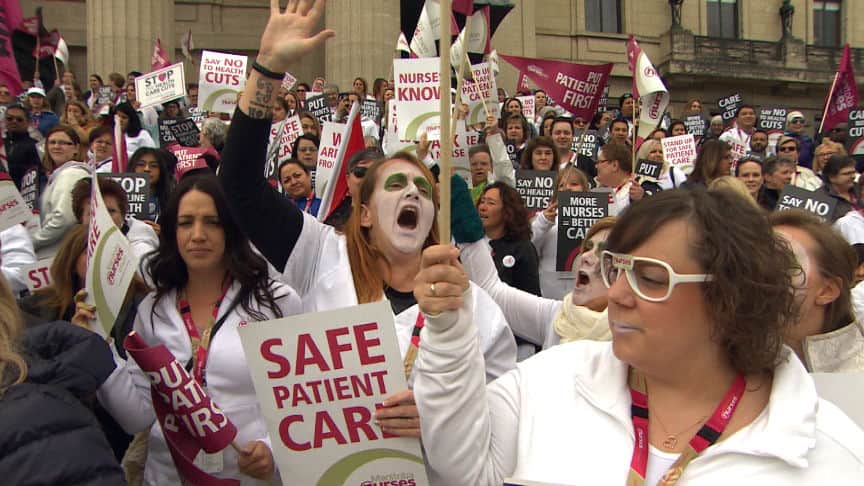 Nurses rally on steps of the Manitoba Legislature

1 year ago
1:01
Nurses rallied on the front steps of the Manitoba Legislature on Wednesday. They say they are burnt out from the growing demands of their jobs and have been left to fend for themselves when dealing with violent, meth-fuelled patients. 1:01
CBC's Journalistic Standards and Practices|About CBC News