More than 100 Point Douglas community advocates, residents and women who rely on the North Point Douglas Women's Centre rallied Friday to protest what they say are funding cutbacks.

She said Thursday she believed the centre would receive an extra $87,000 in funding this year. Instead, Zajac says that amount was in place of a $120,000 grant that would not be renewed. It's a drop in funding that will hurt the centre's ability to respond to local needs, she said. 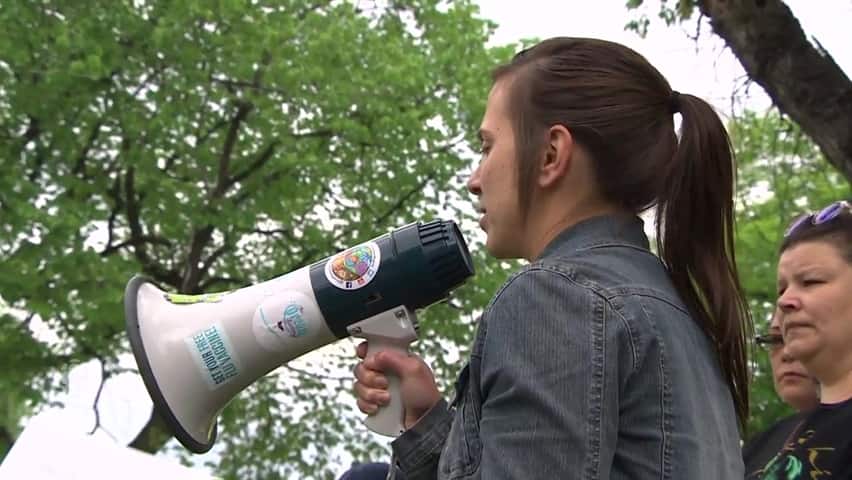 Manitoba's Progressive Conservative government says the centre has access to funding through the United Way that is matched dollar-for-dollar by the province. That new money adds up to $257,590 over the next three years.

A spokesperson for Indigenous and Municipal Affairs Minister Eileen Clarke sent an email to media saying the centre had been told months ago funding arrangements were changing.

"Staff from Indigenous and Municipal Relations (IMR) met with the executive director of the NPDWC on Jan. 4, 2017. It was explained that new multi-year agreements were not being signed at this time and they can apply for future intakes. We provided the balance of funding for the two-year projects," the email says.

Zajac says she can't recall any such communication.

"Come and stand here and talk to the community," she said she told him. "And is he here? He's not here. Because Brian, at the end of the day, is a coward. He's a coward that does not care about our community."

Clarke told reporters on Thursday the controversy over funding was "misinformation from the opposition."

Zajac denies there was any political ploy on the part of the NDP and showed CBC letters from the former NDP government that committed multi-year funding into 2019.

The rally comes as another women's centre says it, too, expects to have less funding this year.

North End Women's Centre executive director Cynthia Drebot says she was told by a project officer in early May that $33,333 in funding from the Neighbourhoods Alive program would not be renewed.

Drebot says the centre will be able to apply for other funding in a different program in the near future. The centre is also waiting to hear if it will receive a renewal for a further $30,000 in funding from Manitoba Justice.

The two sources of funding went to the centre's health and wellness program, she said.

Drebot says at the moment, the absence of Neighbourhoods Alive money has not meant a change to staff. But if funding from Manitoba Justice doesn't materialize, it may trigger some of those changes.

"If we lose that we will have to re-evaluate," Drebot says.

The centre does receive other lines of funding from the provincial government for various programming, she said.