No health-care premium for Manitoba in 1st term, premier says

Premier Brian Pallister said Tuesday he will not bring in a health-care premium for Manitobans in his first mandate.

Premier Brian Pallister says he will not bring in a health-care premium for Manitobans in his first mandate.

"First of all, we're not going to be proceeding with a health-care premium at any point in our current term," Pallister told reporters at a news conference on Tuesday.

The announcement came as the province unveiled early results from three pre-budget surveys of Manitobans asking for input on health-care premiums, marijuana legalization and how to balance the budget.

We have listened &amp; will continue to listen to Manitobans. We are committing today to not introduce a health care premium <a href="https://twitter.com/hashtag/mbpoli?src=hash&amp;ref_src=twsrc%5Etfw">#mbpoli</a> <a href="https://twitter.com/hashtag/MBBudget18?src=hash&amp;ref_src=twsrc%5Etfw">#MBBudget18</a>

The Progressive Conservative government floated the idea of the premiums in September. Pallister said at the time the tax could help the government maintain services in the face of what his government has called a reduced federal commitment to funding provincial health care through health transfers.

Ottawa announced the Canada Health Transfer would increase by three per cent — down from the six per cent increases the provinces had been receiving — in 2016.

The province asked for input from Manitobans in an online survey, which also included questions about how the province should handle the upcoming federal legislation to legalize pot.

The survey will be open for a few more days, Pallister said Tuesday, but early results from more than 18,000 respondents suggest taxpayers don't want to see a premium. Respondents were asked if they'd prefer a low premium, a high premium or reduced services.

"A vast majority of the open-ended comments that we received from Manitobans on the idea of a health-care premium clearly rejected the idea," Manitoba Health Minister Kelvin Goertzen said at the news conference.​ 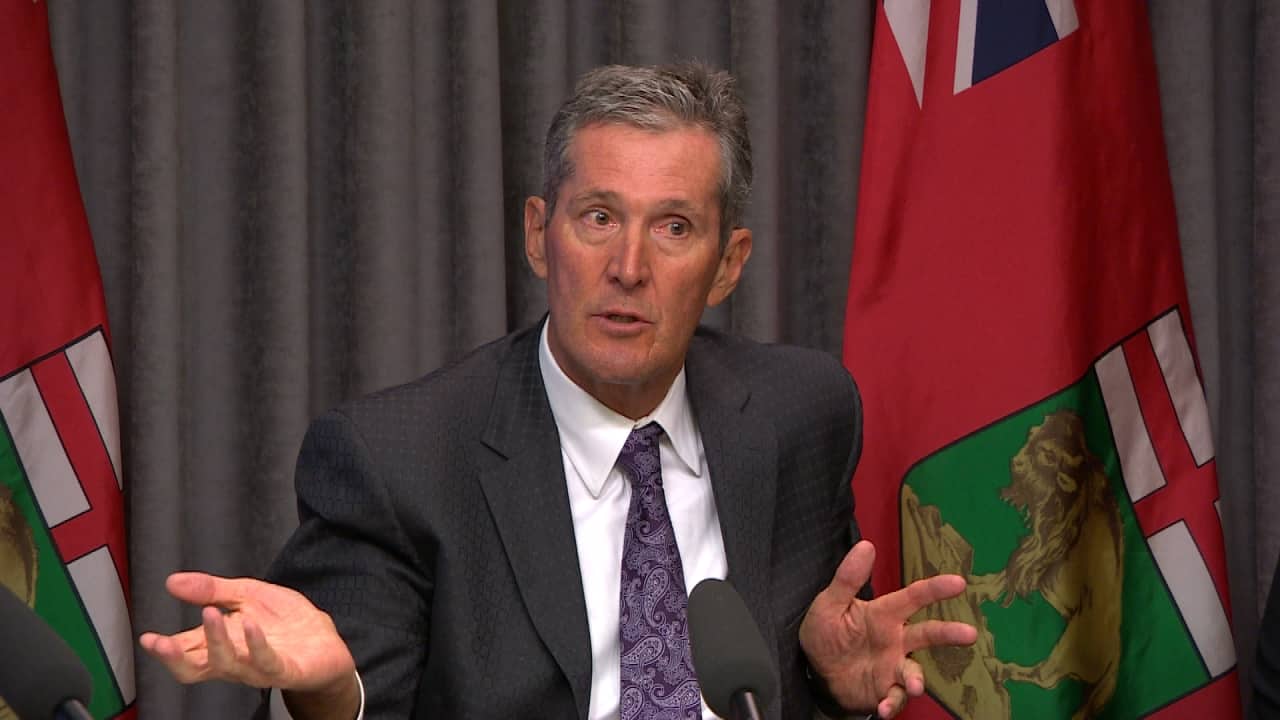 3 years agoVideo
2:01
Premier Brian Pallister announced Tuesday his government will not bring in a health-care premium in its first mandate, and shared results of an online survey launched in September that asked Manitobans to weigh in on the idea. 2:01

Pallister thanked Manitobans who participated in the survey and said the results were "very valuable."

He wouldn't commit to ruling out the introduction of a health-care premium in a second term, if the Progressive Conservatives are re-elected.

"We're going to be leading the fight for a better balance in terms of federal-provincial partnership on health care, as we have been, as our minister has been, as I have been," Pallister said.

NDP Opposition leader Wab Kinew has called the health-care premium questionnaire a "rigged survey," and said the Tuesday announcement was "window dressing" to set the stage for upcoming health-care cuts.

Newly-elected Liberal leader Dougald Lamont criticized the survey as having leading questions and misinformation about Manitoba's financial situation. The government has no way of knowing if respondents actually live in Manitoba, he said, and a single participant can fill it out multiple times.

"These polls are completely useless. They shouldn't be used as a basis for any policy, least of all something as important as health care or taxes," Lamont told reporters after question period. "Governing by polls is bad enough, but this is basically governing by click-fraud and comment section." 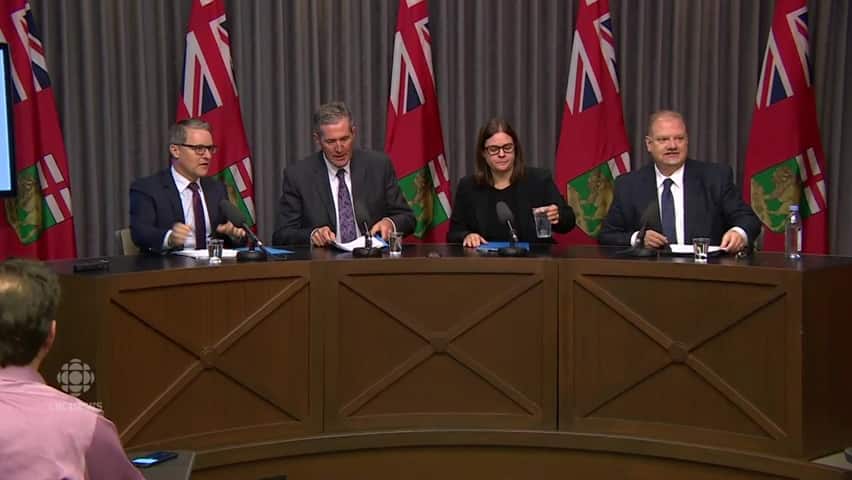 No health-care premium for Manitoba in 1st term, premier says

3 years agoVideo
2:05
Premier Brian Pallister says he will not bring in a health-care premium for Manitobans in his first mandate. 2:05

During the media conference, Pallister admitted the survey wasn't as methodologically rigorous as other options to get public feedback, but called it an "exercise in listening."

"I would counter by saying as early as Aristotle and Socrates, people gathered in the squares who chose to involve themselves in deliberative democracy and made it work. As opposed to the so-called scientific approach of just calling people at random and asking what they think, we actually have invited Manitobans and over 35,000 of them decided to participate in this process. I would suggest that's a worthwhile thing to do," he said.

"My relationship with my wife isn't very scientific, but it's been pretty good for over 30 years. I think it's very important to listen. I think it's the way you build stronger relationships with people," he said.

"We want a strong relationship with Manitobans. We're going to continue to listen."

He also committed to making improvements in an upcoming survey to gauge public opinion on the promised provincial climate plan, which he said will be unveiled on Friday.

The new survey will include measures to limit respondents to Manitobans, and to prevent people from filling it out multiple times.

Christopher Adams, a professor of political sciences with the University of Manitoba's St. Paul's College, said the survey is flawed and not a reliable picture of Manitobans' thoughts.

"It's people who are interested in having a say, who are willing and able to log into a website and to give their views. One of the issues with the online survey, it does ask you to give your email address,and so [respondents] aren't completely anonymous," he said.

In the survey on premiums, respondents are given two questions. The first follows a preamble in which the province says Manitoba spends more per person on health care than most other provinces. It also details relatively lower performance in some categories compared to other provinces and the expectation of rising demand as the population ages.

"The provincial government has several options when it comes to sustaining health care," the survey reads.

"Which do you prefer?

"Please tell us whether you favour a new provincial health care premium in Manitoba by choosing one of the following approaches.

But Adams said he's not convinced the premier based his decision entirely on the survey, and wasn't surprised the premier dropped the idea of a premium based on his previous political stance against raising taxes going back the past two decades.

"He's floated this idea, and many of us — politicial scientists and media commentators — many of us saw it as a ploy to show things are so serious, that we are willing to even discuss a premium," he said.

"But we all knew that he would back off on this, becuase it's not something that he has in his bones to put forward."

Neither Pallister nor Goertzen elaborated when asked multiple times about whether they foresee service reductions coming as a result of the decision.

Pot legislation will be ready by legalization deadline: premier

The online survey also included a section asking Manitobans to weigh in on how the province should address federal which will legalize the recreational use of marijuana.

Justice Minister Heather Stefanson said at the Tuesday news conference that portion of the survey received the greatest participation.

"Not surprisingly, Manitobans told us that ensuring safe use and keeping criminals and gangs out of the marijuana business were top priorities," she said.

She added respondents indicated they'd like to see a lower price for marijuana, and showed an even split on where and how weed should be sold.

Stefanson said the province will roll out information about the legal age to purchase marijuana "over the next few weeks."

Pallister said he's had "good conversations" with other premiers in Canada and the province will be ready with legislation when the drug is legal. But he reitereated criticisms he's made in the past that the process is moving too quickly.

"That doesn't mean I like it. I'm going to continue to express my concerns about the rapidity of this change. This is a significant change," he said. "But, you know, we can walk and chew gum at the same time. We're getting ready."

"I am pleased to see that according to the results of the survey, Manitobans, in general, agree that we are on the right track on balancing the budget," Friesen said.

Friesen said the largest chunk of respondents to the online survey indicated they'd like to see the province continue on a "moderate path" when it comes to balancing the budget.

With files from Sean Kavanagh and Austin Grabish