A newspaper in Thompson, Man., has disabled its Facebook page due to racist slurs that were being posted by the public about aboriginal people. 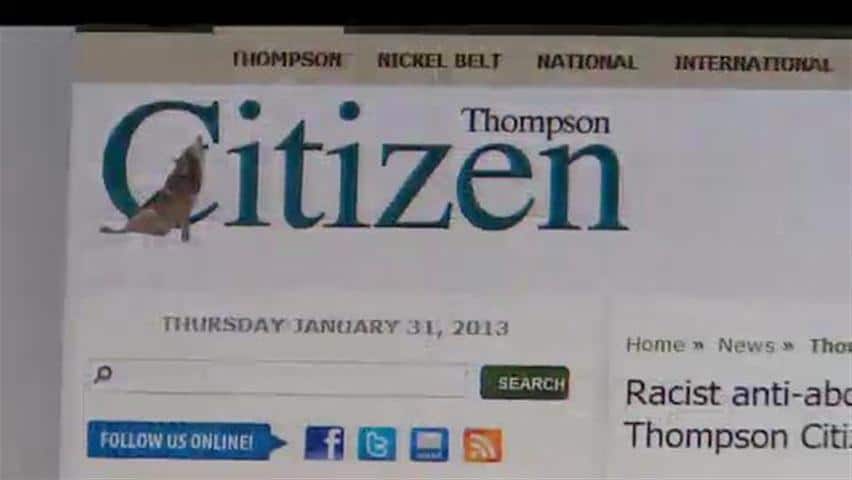 8 years ago
2:04
A newspaper in Thompson, Man., has taken down its Facebook page due to racist slurs that were being posted about aboriginal people. 2:04

A newspaper in Thompson, Man., has disabled its Facebook page due to racist slurs that were being posted by the public about aboriginal people.

Staff with the Thompson Citizen say they could not accept what some people were writing on the newspaper's Facebook page, but they couldn't control what was being posted.

"We're leaving because for some time commenters have been posting virulently racist anti-aboriginal comments on our page and tagging photos in a similar way, including our profile photo of the Thompson Citizen building this morning," editor John Barker wrote in an editorial posted on the paper's website Thursday.

"It ends here. This newspaper is not going to stand by and let anti-aboriginal racists and haters spew their evil on a vehicle we're facilitating them using."

The editorial said the paper had 2,867 Facebook "friends" as of Thursday.

Officials with the Citizen declined to comment on Thursday, telling CBC News their decision and the editorial already say enough.

"I had an opportunity to review some of the comments and I thought that they were absolutely inappropriate and racist, without a doubt in my mind," he said.

Johnston said he does not believe the online postings are reflective of his community as a whole, and he hopes people outside Thompson would not judge the city because of the comments.

Duncan McMonagle, who teaches journalism at Red River College in Winnipeg, said the Citizen made a brave decision.

"Don't allow people to spew racist stuff online — on your Facebook page, on your website," he said.

"You know, it sounds kind of funny to say there are limits to free speech, but there are … and the Charter of Rights [and Freedoms] recognizes them."

McMonagle said the best way for media outlets to deal with hateful material is to invest in ways to monitor online comments and remove anything inappropriate.

"This is not a problem for the Thompson Citizen. This is a worldwide problem," he said.

"When a news medium — a newspaper or broadcaster — provides a forum for people to say anything they want, they got to expect that some of those anonymous cowards are going to say stuff that's really unacceptable."

Aboriginal issues have been in the spotlight in recent months, since the Idle No More protest movement started late last year.

The debate over Idle No More has included comments from those who do not support the movement, as well as derogatory remarks about aboriginal people in general.

Lisa Currier, an Idle No More organizer in Thompson, applauded the Citizen's stand against the racist comments.

At the same time, Currier said she hopes the newspaper will return to Facebook soon.

Earlier this month, the Morris Mirror in southern Manitoba got into hot water after its editor, Reed Turcotte, published inflammatory remarks in an editorial giving a "thumbs down" to Idle No More.

"In some cases, natives are acting like terrorists in their own country," Turcotte's editorial read in part. "Indians/Natives want it all but corruption and laziness prevent some of them from working for it."

Turcotte later published a special edition with an apology, but he also noted that many people shared his point of view.

"The issue is that hate sometimes comes with a deep history behind it," said Niigaan Sinclair, a native studies professor at the University of Manitoba.

"I'm more interested in the history of where that came from, and talking about that history, and engaging in dialogue."

Sinclair tried to meet with Turcotte to discuss the editorial, but Turcotte declined the meeting.

Back in Thompson, readers of the Citizen have been weighing in on the paper's decision to pull down its Facebook page, with some calling the move "spineless" and others applauding it.